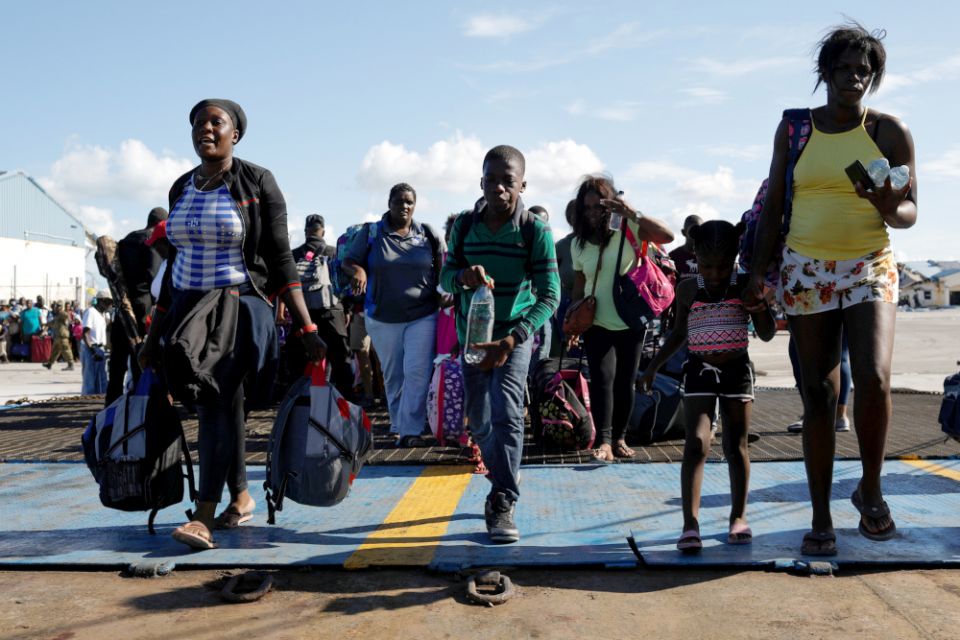 People board a ferry Sept. 6, 2019, at Marsh Harbour Government Port during an evacuation operation after Hurricane Dorian hit the Abaco Islands in the Bahamas. Because of the storm, two Florida Republican senators have asked President Donald Trump to waive or suspend certain visa requirements for Bahamian citizens with relatives residing in the U.S. (CNS/Reuters/Marco Bello)

Miami — In the wake of Hurricane Dorian, two Florida Republican senators have asked President Donald Trump to waive or suspend certain visa requirements for Bahamian citizens with relatives residing in the U.S.

Hurricane Dorian stalled over the northern Bahamas Sept. 1-3 as one of the strongest storms in Atlantic history. As of Sept. 10, the death toll was at least 50 and was expected to increase as search and rescue operations continued.

"It's important Customs and Border Protection and the Bahamian government work together to clarify the current rules regarding visas in the Bahamas," Sen. Rick Scott said in his statement. His letter was co-signed by U.S. Sen. Marco Rubio.

"As hundreds of thousands of Bahamians seek refuge or start to rebuild after Hurricane Dorian, we cannot have the kind of confusion that occurred last night in Freeport," Scott said.

He was referring to the hundreds of people who on Sept. 8 boarded a ferry in Freeport destined for Port Everglades in Florida, only to be told to get off the boat if they did not have entry visas for the U.S., according to news reports.

"Sen. Rubio and I continue to urge President Trump to waive some visa requirements for those in the Bahamas that have family in the United States. But until that happens, there needs to be clarity on the current rules," he added.

Florida, Scott noted, enjoys deep historical ties with the Bahamas, and, due to proximity, many Floridians have family in the Bahamas. Having prepared for and avoided a direct hit from Hurricane Dorian, Floridians are now eager to help family and friends in the Bahamas.

"I also encourage Customs and Border Protection to work with the Bahamian government to set up a temporary site at their ports of entry. Professionals should be on site to help the many Bahamians trying to leave destruction," Scott said.

He also offered proposals to help families in Bahamas recover, including a change in the U.S. Tax Code to incentivize charitable giving; continued deployment of U.S. Coast Guard and other U.S. entities in providing humanitarian assistance; and a redirect of foreign aid away from countries he said are adversaries of the U.S. to put that aid toward the Bahamas recovery efforts.

For his part, Rubio, who traveled to the Bahamas following the hurricane, urged the U.S. Agency for International Development to request the USS Comfort be repositioned to the Bahamas as soon as possible, as well as any assets needed from the Bataan Amphibious Readiness Group.

In the letter, Rubio wrote that the Navy hospital ship with "its crew of trained medical staff, flight deck and ability to desalinate water, would be ideal in helping the Bahamian people."

It is critical that during this time of need for our neighbors, the United States uses all of our capabilities to continue to assist in the recovery efforts, he wrote. "This includes urgent efforts to save lives."

Regarding the situation with the ferry in Freeport, a Democratic state lawmaker, Rep. Shevrin Jones, has pointed out that many people lack all the proper documents due to the storm.

Americans' kindness cannot end at just giving donations and relief supplies, he said. "It has to extend to us helping our neighbors in the Bahamas have a place to recover while their homes and lives are rebuilt," he tweeted. "The Bahamians just need a temporary place to regroup."

U.S. State Department guidelines state that most individuals traveling to the United States require a visa but that some individuals may travel without a visa on the Visa Waiver Program.

But those preclearance station hours of operation may change with short notes in emergency situations such as hurricane watches, the State Department states.