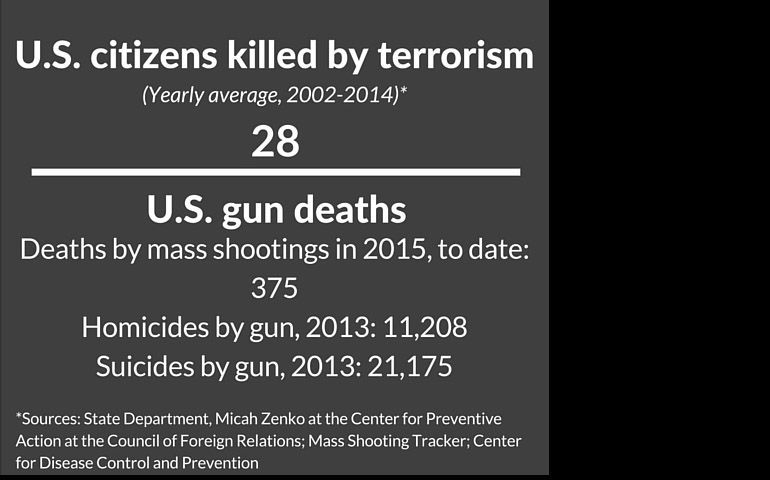 This article appears in the Gun Violence feature series. View the full series.

President Barack Obama’s built up frustration poured from the podium as he addressed the American public about yet another mass shooting following Thursday’s tragedy at Oregon's Umpqua Community College, where 10 people were killed, including the gunman, and seven more were injured.

“America will wrap everyone who’s grieving with our prayers and our love. But, as I said just a few months ago, and I said a few months before that, and I said each time we see one of these mass shootings, our thoughts and prayers are not enough. It’s not enough. It does not capture the heartache and the grief and anger that we should feel, and it does nothing to prevent this carnage from being inflicted someplace else in America, next week or a couple months from now.”

“Somehow this has become routine,” he continued. “The reporting is routine. My response here at this podium ends up being routine, the conversation in the aftermath of it. We've become numb to this.”

And this routine is unique to the United States, where the murder rate by firearms is about 20 times the average of other developed high-income countries. Exact figures, however, are hard to measure, as Congress “explicitly blocks us from even collecting data on how we could potentially reduce gun deaths,” Obama noted.

But what has been gathered is daunting.

According to the Center for Disease Control and Prevention, in 2013 the latest figures available, more than 11,000 homicides were by firearm, as well as nearly 21,200 suicides. To date, 2015 has seen 295 mass shootings, according to the Mass Shooting Tracker, totaling 375 deaths.

In calling all media outlets to contrast deaths by guns and terrorism, Obama suggests we have a Congress that is reluctant to take the most minor steps toward gun safety laws, such as universal background checks. But combatting terrorism — no matter how costly — remains a priority, despite an average of 28 U.S. citizens per year killed by terrorism between 2002 and 2014, according to the State Department and Micah Zenko at the Center for Preventive Action at the Council of Foreign Relations.

While the conversations following such tragedies often focus on the perpetrator’s mental illness rather than choice of weaponry, Obama noted that other developed nations also deal with mental illness. What they don’t have that we do, however, are more guns than people, according to a 2012 Congressional Research Service report.

Those guns aren’t too hard to acquire, either. Private transactions do not federally require background checks. And only 10 states currently have a system in place that requires prospective handgun purchasers to obtain a license verifying they passed a background check either through an in-person application process or by applying with local law enforcement.

About four in 10 gun transfers take place between unlicensed people, according to a 2013 Center for American Progress report, totaling to 6.6 million transfers without a background check in 2012. And nearly 80 percent of those who used a handgun in a crime acquired it in a private transfer, according to a national survey of inmates by the Bureau of Justice Statistics.

“This is something we should politicize,” Obama said, noting that, following mass shootings, he is often accused of exploiting tragedies to push an agenda. “It is relevant to our common life together, to the body politic.”

It’s a matter of safety, he added. When Americans are killed in mine disasters, we work to make mines safer. We fix roads and mandate the use of seatbelts to avoid auto fatalities, he said. “So the notion that gun violence is somehow different?”

Studies show that more guns equate with more suicides, homicides and accidental deaths. Yet, more than a third of U.S. homes contain a gun.

American children between the ages of 5 and 14 are 11 times more likely to be killed with a gun than those from other developed countries, where gun ownership is far less common. And more than half of suicides are committed with firearms, a means that encourages impulsiveness, as one study showed that more than half of survivors who attempted to kill themselves with a gun reported that those suicidal thoughts lasted less than 24 hours.

“More guns keep us safer” is often the response of the National Rifle Association, which heavily lobbies against gun control and, in 2012, donated to 261 members of Congress, according to The Washington Post. And such a tactic appears to be effective, as one gun manufacturer reported a 52 percent increase in earnings the year following the Sandy Hook school massacre in Newtown, Conn., which claimed the lives of 20 children and six staff members Dec. 14, 2012.

“I would particularly ask America's gun owners who are using those guns properly, safely — to hunt, for sport, for protecting their families — to think about whether your views are properly represented by the organization that suggests it is speaking for you,” Obama implored.

“I hope and pray that I don't have to come out again during my tenure as president to offer my condolences to families in these circumstances. But based on my experience as president, I can't guarantee that. And that's terrible to say. And it can change.”

[Soli Salgado is an NCR Bertelsen intern. Her email address is ssalgado@ncronline.org. Follow her on Twitter @soli_salgado. Graphic by NCR Staff.]

Catholic schools a faithful presence at Cleveland March for Our Lives

Making something beautiful out of brutality exposed in mass shootings