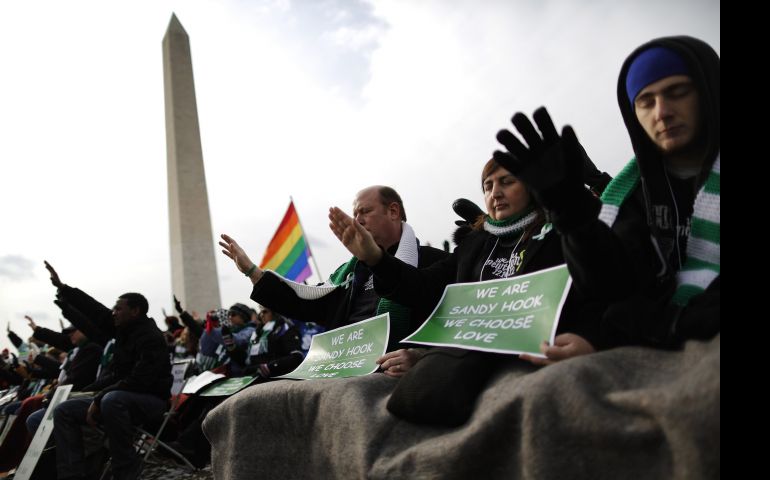 People hold their hands outstretched toward the U.S. Capitol as they pray for government action against gun violence during the March on Washington for Gun Control on the National Mall in Washington Jan. 26. Thousands of people joined the rally for gun c ontrol, marching from the Capitol to the Washington Monument. (CNS photo/Jonathan Ernst, Reuters)
This article appears in the Gun Violence feature series. View the full series.

The first attempt at federal gun control legislation since the Newtown, Conn., massacre failed Wednesday, as none of the amendments proposed in the U.S. Senate garnered the necessary 60 votes for inclusion in a gun control bill. But its supporters -- from political leaders to the families of the Newtown victims -- vowed that the fight was far from over.

“All in all, this was a pretty shameful day for Washington. But the effort is not over,” said President Barack Obama, speaking from the White House’s Rose Garden and surrounded by members of the group Sandy Hook Promise shortly after a vote on extending backgrounds checks failed.

The president spoke without restraint of his disappointment, accusing gun advocacy groups, such as the National Rifle Association, of swaying senators’ support from “commonsense gun reforms,” while at the same time challenging the American people to equal and surpass the persistent pressure professional lobbyists place on congressional members.

“Those who care deeply about preventing more and more gun violence will have to be as passionate, and as organized, and as vocal as those who blocked these common-sense steps to help keep our kids safe,” he said, referring often to polls showing 90 percent of Americans supporting universal background checks.

“To change Washington, you the American people are going to have to sustain some passion about this. … and that requires strength, and it requires persistence, and that’s the one thing that these families should have inspired in all of us,” Obama said.

Before the vote, there had been some optimism in Washington for an idling federal gun control bill, in large part due to week-long lobbying by Newtown families who lost loved ones Dec. 14, and a bipartisan amendment on background checks.

The doors to debate opened April 11 when the Senate voted 68-31 for a bill proposed by Majority Leader Harry Reid, D-Nev., to proceed to the floor, eliminating a filibuster threatened by more than a dozen Republicans.

The Reid bill -- the Safe Communities, Safe Schools Act of 2013 -- would have increased funds for school security, increased penalties for gun trafficking and straw purchases (buying a gun for someone who would not pass a background check), and sought improvements to the national background check system.

A bipartisan amendment, brokered by two gun rights legislators with “A” ratings from the NRA, appeared to have given new life to the legislation, but it still fell six votes short of the necessary 60.

Spearheaded by Sens. Joe Manchin, D-W.Va., and Pat Toomey, R-Pa., the Public Safety and Second Amendment Rights Protection Act would have expanded background checks to cover all online sales and most at gun shows, and encouraged states to provide more extensive records to the national background checks system.

The amendment would have also extended gun rights, allowing for interstate handgun sales and worry-free transportation of guns across state lines during hunting and recreational trips, while expressly prohibiting the establishment of a national gun registry. In addition, it called for a commission to study the causes of mass violence, specifically reviewing school safety, mental health and media violence.

Other amendments attached to the Reid bill -- all of which failed to muster 60 votes -- sought to ban future assault rifles, limit magazines to 10 rounds, and expand the restricted list of gun owners to felons convicted in foreign courts. Reid was expected to pull the bill Thursday in order to bring it up again at a later date.

Reception to the Manchin-Toomey compromise was mixed even before the vote.

Religious leaders urged the Senate to pass the Reid bill, including the “life-saving Manchin-Toomey proposal,” collectively saying, “Congress must not waste any more precious time.”

“Clergy and people in the pews will not rest until Congress passes this necessary legislation that will help put an end to the senseless deaths of 30,000 annual gun violence victims,” read an April 16 statement from Faiths United to Prevent Gun Violence.

Among them was Stockton, Calif., Bishop Stephen Blaire, chair of the U.S. bishops’ Committee on Domestic Justice and Human Development.

“Our position as a church is in terms of protecting life and also coming from a sense of justice and that we think that it is for the common good that steps be taken to reduce violence in our society and we feel that regulation of firearms is an important step to accomplish that goal,” Blaire told NCR in an interview just hours before the Senate began voting.

Blaire issued a letter on behalf of the bishops endorsing the Reid bill before it moved to the floor, and asked legislators to support universal background checks, harsher penalties for gun traffickers, and bans on assault weapons and high-capacity magazines for civilians.

He said the bishops’ position is not in opposition to the Second Amendment, but rather in line with protecting the common good of all, and a step toward the ultimate goal of a world free of war and violence, even if it is remains more ideal than real at present.

“We have to accept the reality of the world in which we live … but we still have to work for that which promotes a peaceful society,” he said.

Other religious voices saw the legislation as a step forward, but one that highlighted how far there is to go.

“It is up to all of us -- especially pastors and parents -- to remind our elected leaders that action is urgently needed,” Lisa Sharon Harper, the director of mobilizing for Sojourners, told NCR.

“While crafting sound public policy does take time, the process itself should not be used to prevent progress on measures that would literally save lives.”

The NRA opposed the bill in full, while the Citizens Committee for the Right to Keep and Bear Arms at first backed the Manchin-Toomey amendment, but withdrew its support late Wednesday after it felt provisions for restoring gun rights were omitted.

As senators took to the floor to discuss the amendment, multiple Republicans voiced concern the bill would require background checks on private gun transfers (sales and gifts among family, friends, co-workers, parishioners, etc.) and lay the groundwork for a national registry.

The co-sponsors Manchin and Toomey both attempted to alleviate those worries, by restating their own opposition to a registry, and again pointing to their proposal’s text prohibiting any federal official from beginning the process, or face felony charges and 15 years in prison.

The private transfer exclusion drew criticism from gun-control supporters, as well, who pointed to studies showing it a common way for criminals to acquire weapons.

“Is [requiring a background check] really such a huge inconvenience given that it will make us all a little bit safer?” said Saul Cornell, the Paul and Diane Guenther chair in American history at Fordham University.

Cornell, a Second Amendment scholar and author of “A Well-Regulated Militia: The Founding Fathers and the Origins of Gun Control in America,” told NCR Tuesday that the oft-misunderstood right to bear arms doesn’t reject but actually “compels gun regulation.”

Before, during and after the American Revolution, he said, states had to keep track of their militia’s membership, and that led to occasional gun censuses to determine who had guns and how many more were needed.

“By definition, if you failed a background check, you’re not entitled to have a firearm. And the founders definitely disarmed groups and persons they thought were dangerous,” he said.

On Tuesday evening, Cornell spoke about the right to bear arms with a group some have largely credited for a gun control bill even advancing to the Senate floor at all -- the Newtown community. The event was organized by the Newtown Action Alliance, one of several community groups who have formed in the wake of the mass shooting at Sandy Hook Elementary School.

Another was Sandy Hook Promise, who wrote Congress April 4 asking for universal background checks, magazine capacities limited to 10 bullets, and strengthening penalties for gun trafficking and straw purchases, but aware those wouldn’t prevent all gun violence.

“That, however, cannot be the test that determines whether America chooses to act or remain complacent,” read the letter, signed by more than 100 family and friends of the victims. “These measures will surely save many lives. And they will prevent other families from experiencing our grief.”

The group appeared three days later on CBS’ “60 Minutes,” urging the government “to be our government and vote.” On Wednesday, the Senate did, rejecting each proposal the families backed.

But standing beside the president that evening, they, too, vowed to their resolve would not waver.

“We are not defeated, and we will not be defeated,” said Mark Barden, whose 7-year-old son Daniel was killed in the shooting. “We are here now; we will always be here because we have no other choice. We are not going away.”

Serving God by suing others: Inside the Christian conservative legal movement