How Georgetown fosters a civil debate on abortion 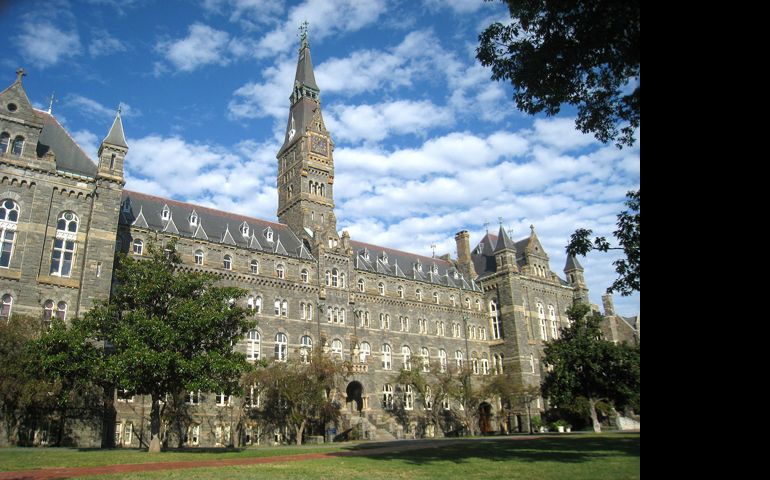 Such was the case when President Barack Obama addressed Notre Dame's graduating class in 2009. A similar furor erupted at Georgetown when then-Secretary of Health and Human Services Kathleen Sebelius spoke at its 2012 commencement. Sebelius, a Roman Catholic, is an ardent defender of abortion rights and of the Obama administration's rule that insurers must cover artificial contraception, which the Catholic Church opposes.

Cardinal Donald Wuerl, the archbishop of Washington, called the Sebelius invitation "shocking." Yet in very tangible and important ways, the archdiocese has a good working relationship with the nation's oldest Catholic university.

On April 12, on its northwest Washington campus, Georgetown's Initiative on Catholic Social Thought in Public Life held a panel discussion with two lay Catholics and a woman religious. All three are deeply engaged as scholars and activists in opposing abortion.

In opening remarks, John DeGioia, Georgetown's president, affirmed that as "beneficiaries of a profound moral and spiritual tradition," a Jesuit university might have preferences about how an academic inquiry will turn out. Even so, he added, "We can never let our interests impede the open exchange of ideas and perspectives."

In the two hours that followed, the panelists spoke forcefully and unapologetically about the urgency of protecting life at its most vulnerable and of their quibbles with the presuppositions and consequences of support for abortion rights.

The event had been conceived before a student-run group invited Richards to speak, but organizers saw it as an opportunity to offer a clear and affirmative discussion on protecting human life and dignity using Pope Francis' metaphor of the "throwaway culture" as a starting point.

I have been plodding through a Ph.D. program at Georgetown for longer than I care to admit. When I arrived, I was an ardent secularist who disdained Catholic teaching on human sexuality and life issues. I only hoped Georgetown's religious identity would not unduly interfere with my intellectual pursuits.

Today, I find myself surprisingly sympathetic to views I once considered abhorrent. Where I still disagree, I at least acknowledge my respect for church teaching and for the men and women who faithfully promote it. By fostering an environment of freedom, openness and honest inquiry, Georgetown created the conditions for me to see the moral weight and internal consistency of Catholic social teaching.

I find the conservative critique that "Georgetown is not Catholic enough" to be weak and misinformed.

At a recent Mass on the Solemnity of the Annunciation of the Lord (which celebrates the angel's announcement that Mary was pregnant with the incarnate Son of God), a Jesuit priest led worshippers in prayers for all unborn children and for a culture that protects human life, especially at its most vulnerable.

Against a backdrop of daily Masses, active Catholic student groups and visible institutional support for conferences, events and activities where abortion opponents engage in persuasion and activism, the idea that Georgetown is hopelessly liberal or insufficiently Catholic is simply indefensible.

But I would not have opened my mind to the Catholic moral tradition in an environment where abortion rights supporters are forbidden from even speaking. I needed to hear abortion opponents' most rigorous and compelling arguments to see any intellectual feebleness in the fashionable elite opinion that legal abortion is the definitive guarantor of women's liberation and equality.

I had been immersed in religion since childhood. I came to Georgetown, which I supposed to be mostly secular, to escape primitive superstitions and move on with my professional life. Instead, I re-engaged religious questions in the most stimulating environment imaginable for such pursuits.

Georgetown and its leaders deserve our thanks and respect for so effectively and faithfully modeling vigorous and civil debate on the great ethical questions of our time. Surely this is vital for a moral citizen's education. It has certainly been foundational to mine.

Commentary | How Georgetown fosters a civil debate on abortion

What Obama should say tonight