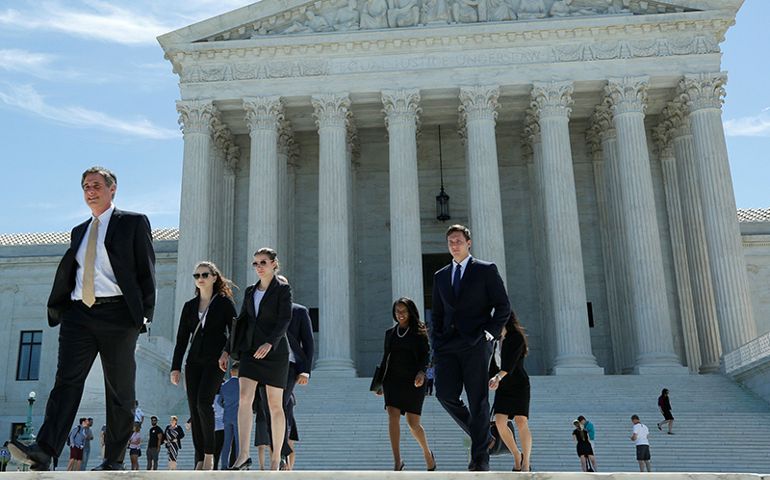 People walk out after the U.S. Supreme Court granted parts of the Trump administration's emergency request to put his travel ban into effect immediately while the legal battle continues, on June 26, 2017, in Washington, D.C. (Photo by Yuri Gripas/Reuters)

Washington — The Supreme Court says the Trump administration can strictly enforce its ban on refugees, but is leaving in place a weakened travel ban that includes grandparents among relatives who can help visitors from six mostly Muslim countries get into the U.S.

The justices acted July 19 on the administration's appeal of a federal judge's ruling last week. U.S. District Judge Derrick Watson ordered the government to allow in refugees formally working with a resettlement agency in the United States. Watson also vastly expanded the family relations that refugees and visitors can use to get into the country.

The high court blocked Watson's order as it applies to refugees for now, but not the expanded list of relatives. The justices said the federal appeals court in San Francisco should now consider the appeal. It's not clear how quickly that will happen.

In the meantime, though, up to 24,000 refugees who already have been assigned to a charity or religious organization in the U.S. will not be able to use that connection to get into the country.

"This ruling jeopardizes the safety of thousands of people across the world including vulnerable families fleeing war and violence," said Naureen Shah, Amnesty International USA's senior director of campaigns.

That part of the court's ruling was a victory for President Donald Trump, who rolled out a first ban on travelers and refugees after just a week in office, prompting a legal fight that has raged ever since.

The court's ruling exempted a large swath of refugees and travelers with a "bona fide relationship" with a person or an entity in the U.S. The justices did not define those relationships but said they could include a close relative, a job offer or admission to a college or university.

Watson's order added grandparents, grandchildren, brothers-in-law, sisters-in-law, aunts, uncles, nieces, nephews and cousins to a list that already included a parent, spouse, fiancé, son, daughter, son-in-law, daughter-in-law or sibling in the U.S. The expanded list of relatives remains in effect, and the State Department already has instructed diplomats to use the broader list when considering visa applicants from the six countries.

Hawaii Attorney General Doug Chin said the court's order July 19 "confirms we were right to say that the Trump administration over-reached in trying to unilaterally keep families apart from each other."

Justices Samuel Alito, Neil Gorsuch and Clarence Thomas would have blocked Watson's order in its entirety. Those same three justices said last month they would have allowed the Trump travel ban to take full effect.

The travel ban already is on the court's calendar for October, though the 90-day pause will have expired by then.