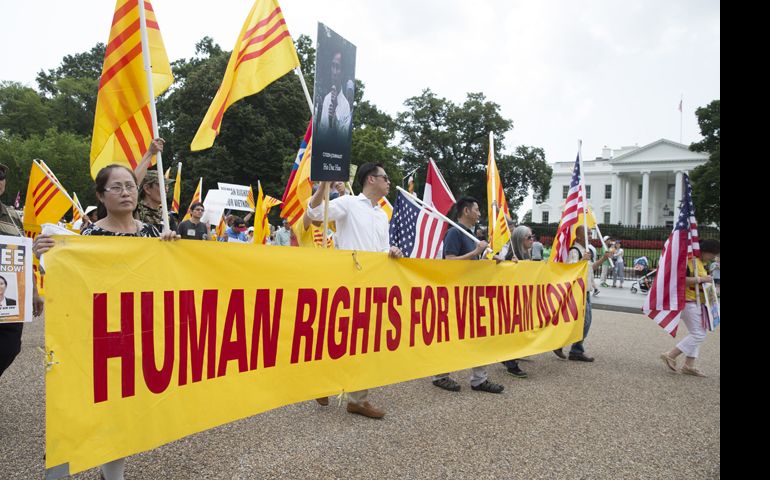 People protest for human rights and democracy in Vietnam outside the White House in 2015 in Washington. (CNS/Michael Reynolds, EPA)

"President Obama gave up one of the few remaining leverage points that the United States has in exchange for vague promises of expanded port use by the U.S. Navy," said Smith. "This was an epic failure of diplomacy."

As an advocate for the Vietnam Humans Rights Act of 2015, Smith mentioned that Obama made a "bad deal" with Vietnam, receiving nothing in return for lifting the embargo.

"Vietnam would have offered the U.S. Navy port access without condition, given China's advances in the South China Sea," said Smith, who is chairman of the House Subcommittee on Africa, Global Health, Global Human Rights and International Organizations.

In his remarks, Smith referenced the 100 "prisoners of conscience" who remained detained in Vietnam, including human rights attorney Nguyen Van Dai, whose wife, Vu Minh Khanh, gave testimony at a May 10 hearing on political prisoners held by Smith's subcommittee.

He said he met the couple on a trip to Vietnam in 2005, two years prior to Van Dai's first arrest.

"My husband was first arrested in 2007, then sentenced to four years imprisonment plus four years of house arrest, for violating Article 88 of Vietnam's Penal Code, 'conducting propaganda against the state,'" said Minh Khanh in her testimony. "While in prison, my husband was disbarred and his law office was shut down. After being released in 2011, my husband was placed under house arrest until March 2015."

Her husband was arrested again Dec. 16, 2015, and charged under Article 88 and "I have not been allowed to see him since," she said.

In 2007, during the time of Van Dai's first arrest, Vietnam's entry into the World Trade Organization allowed the Communist government the freedom to "jail, torture and abuse," said Smith.

"The president's visit to Cuba and Vietnam share the same sad pattern," said Smith. "He is more interested in photo-ops with dictators than standing up for persecuted individuals who share our values of freedom and human rights."

As a result of Obama's decision, Smith said that he will continue to push the Vietnam Human Rights Act.

"The bipartisan Vietnam Human Rights Act will restore the right priorities to U.S. policy toward Vietnam and will limit U.S. non-humanitarian assistance that goes to Vietnam until there are concrete human rights protection," said Smith.

During what was his first trip to Vietnam, Obama May 23 announced lifting a decades-long American arms embargo on the country and also hailed new business deals between the two countries. The president visited Cuba in March, and the U.S. has loosened some banking restrictions and travel rules regarding the island nation.

Smith said that Obama should have been more concerned about the denial of religious freedoms and human rights that affect the people of Vietnam, rather than our own values and interests.

"The Communist Party is not Vietnam's future," said Smith. "That future lies with Nguyen Van Dai and the many other advocates of political reform and human rights who seek our freedoms more than our trade."

Because of what Smith described as the president's neglect to resolve this issue, it now remains in the hands of Congress.

"The president failed to send this message. It is up to the Congress, and the next administration, to restore the right priorities to U.S.-Vietnam relations," said Smith.

Latinos and the road to the White House