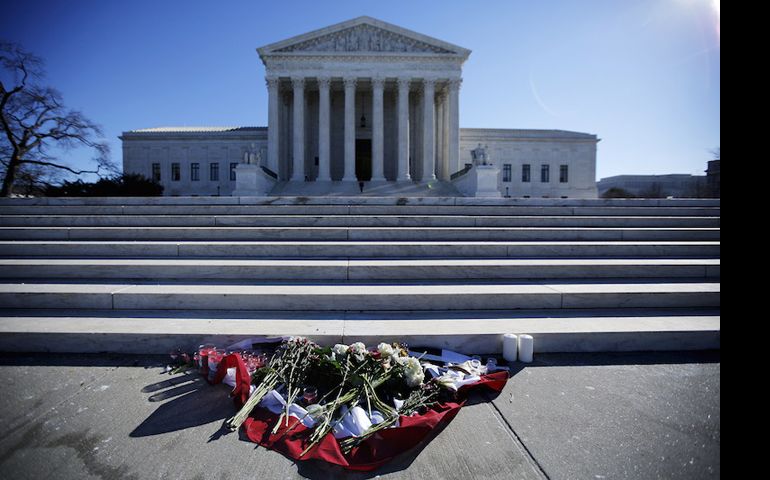 Flowers are seen in front of the Supreme Court building in Washington after the death of Supreme Court Justice Antonin Scalia, Feb. 14, 2016. (Reuters/Carlos Barria)

My church friends are starting to scare me. (Disclaimer: I am both a Baptist minister and a constitutional lawyer with 15 years of experience representing evangelical and mainline Protestant churches.)

Some Christians are starting to clamor for President Obama to refrain from appointing a replacement for Supreme Court Justice Antonin Scalia. Evangelical Ted Cruz has gone so far as to suggest that not only should the next Supreme Court justice be nominated by the next president (who he hopes will be (a) himself, or (b) at least a Republican), the senator has extolled Justice Scalia as a champion of religious freedom and a model for the type of justice the Senate should confirm.

That's what scares me. They have it backwards, President Obama should act now and nominate someone with a deeper appreciation of religious freedom than Scalia showed in important cases.

Here's a quick primer in constitutional law for all of the faithful who believe that the road to the Kingdom of God is paved with Republican justices.

Scalia had the distinction of penning the most infamous religious freedom case of the last century: Employment Division v. Smith. The constitution's Free Exercise (of religion) Clause had been interpreted by the Supreme Court for more than 35 years as protecting citizens' religiously motivated conduct from government interference absent (1) a "compelling" interest such as health or safety, and (2) no less restrictive means of pursuing that interest. So even if the government had a compelling interest in teaching school children to read, schools might not be able to force a child to read a particular book.

That was the law until Scalia (and his Republican-appointed colleague Anthony Kennedy) finished with it. Describing the accommodation of religious exercise under the "compelling" interest test as a "luxury" the nation could not afford, Scalia's opinion moved the nation's first liberty to the back of the constitutional bus. Maybe off it altogether.

The results were immediate and profound. States were permitted to prohibit Native Americans from using peyote in their ancient religious rituals. Sikhs were forced to doff their turbans for hard hats at construction sites. The Supreme Court vacated a Minnesota decision extending First Amendment protection to Amish farmers forced off the highways for refusing to affix large warning signs ("worldly symbols" to the Amish) to their buggies despite evidence that that their more modest silver reflector tape was equally effective. It was, in short, open season on religious freedom in America. If Obamacare's contraceptive mandate had been in effect, neither Hobby Lobby -- nor anyone else -- would have stood a chance challenging it in court.

But government "by the people and for the people" still works, or at least it did in the 1990s. A coalition of more than 60 national organizations rose up to rescue the nation's first liberty. From the ACLU to Pat Robertson's ACLJ. From Norman Lear's People for the American Way to Beverly LaHaye's Concerned Women for America. Jews and evangelicals, Buddhists and Baha'is put aside their religious and political differences to unite around a fundamental American principle: religious freedom for all.

Corrective legislation, championed by Democratic Sen. Ted Kennedy and Republican Sen. Orrin Hatch, passed both chambers of Congress with only three dissenting votes and was signed into law by President Bill Clinton. Republican Newt Gingrich and Democrat Barney Frank were co-sponsors of the House bill.

But even that isn't the end of the story. Four years later when the new legislation was used by an archbishop in Boerne, Texas, to challenge the local government's refusal to let one of his churches expand the size of its worship space to accommodate their burgeoning congregation, Scalia joined Kennedy in denying the bishop relief. Worse still, Scalia and Kennedy decided that the new law did not even apply to state and local governments.

There's a certain irony here. We tend to assume that Republican judges will be friendlier to religious freedom than their Democratic counterparts. The lessons of the last 26 years suggest otherwise.