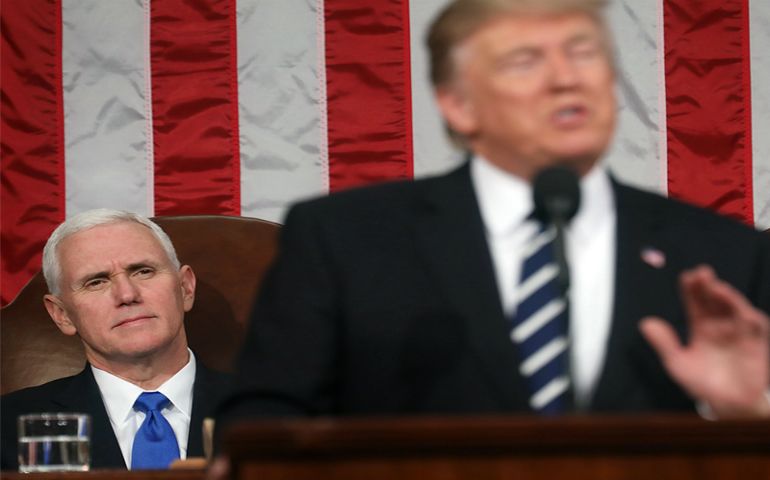 Vice President Mike Pence, left, listen as President Trump delivers his first address to a joint session of Congress from the floor of the House of Representatives in Washington, D.C., on Feb. 28, 2017. (Reuters/Jim Lo Scalzo/Pool)

Notre Dame, Ind. — After months of intense debate, the University of Notre Dame announced that Vice President Mike Pence will be the main graduation speaker this spring, thereby avoiding what Notre Dame’s president worried would be a “circus” if President Trump were invited.

Pence, an Indiana native and the state’s governor until January, will also receive an honorary degree at Notre Dame’s commencement ceremony on May 21 — the first U.S. vice president to receive such an honor by the iconic Catholic school in South Bend.

“It is fitting that in the 175th year of our founding on Indiana soil that Notre Dame recognize a native son who served our state and now the nation with quiet earnestness, moral conviction and a dedication to the common good characteristic of true statesmen,” Fr. John Jenkins, Notre Dame’s president, said in a statement March 2.

“With his own brand of reserved dignity, Mike Pence instilled confidence on the state level then, and on the world stage now. We are proud to welcome him to represent the new administration.”

Notre Dame has boasted of hosting more U.S. presidents as commencement speaker than any other non-military school, but from the moment Trump was elected in a shocking result in November, Jenkins faced a dilemma over whether to invite such a controversial figure.

Trump won the overall Catholic vote over his Democratic opponent Hillary Clinton by a convincing margin, 52-45, with much of that margin provided by white Catholics in key upper Midwest states like Indiana.

But Trump’s harsh anti-immigrant rhetoric drove Latino Catholics away from the Republican ticket and it has continued to prompt pushback against Trump from Catholic leaders – including Pope Francis – that is unusual for a GOP pol who has also pledged to oppose abortion, which has been the U.S. church’s hallmark issue.

Jenkins, for example, joined more than 100 leaders of other Catholic colleges in vowing to protect any Notre Dame students from efforts by the incoming Trump administration to deport them.

Moreover, Trump ridiculed the disabled, said that gay marriage is a settled issue, and referred to women in demeaning terms and boasted about seducing and sexually exploiting women, and even assaulting them.

His campaign and election were also cheered by white supremacists, anti-Semites and Islamophobes, and hate crimes have spiked even as he has chosen outspoken nationalists for prominent roles in his administration.

In a December interview, Jenkins admitted that all of that gave him pause about inviting Trump, especially since President Obama’s appearance at graduation in 2009 sparked a huge outcry from conservatives who said Obama’s support for abortion rights should disqualify him from any such honor.

The 2009 commencement “was a bit of a political circus, and I think I’m conscious that that day is for graduates and their parents — and I don’t want to make the focus something else,” Jenkins told The Observer, the paper serving the campus near South Bend, Ind.

Pence appeared to be smart compromise, as he is from Indiana and respected as a public figure.

But Pence, too, could bring issues of his own.

For one thing, while Pence was raised Catholic he became an evangelical Protestant in college and has attended megachurches. He describes himself as an “evangelical Catholic,” which sounds like a theological contradiction and also a label that could seem as though he is trying to have it both ways.

In addition, while his views on abortion and gay rights, for example, are in line with much of the hierarchy he has also changed some of his positions in order to support Trump’s much more hard line policies in various areas.

In 2015, a year before Pence was chosen as Trump’s running mate, he clashed with then-Archbishop Joseph Tobin of Indianapolis, who is now a cardinal in New Jersey, over resettling Syrian refugees.

Pence asked that a local Catholic Charities not resettle a Syrian refugee family but Tobin refused, noting that the family had been thoroughly vetted and that the church was fulfilling its mission.