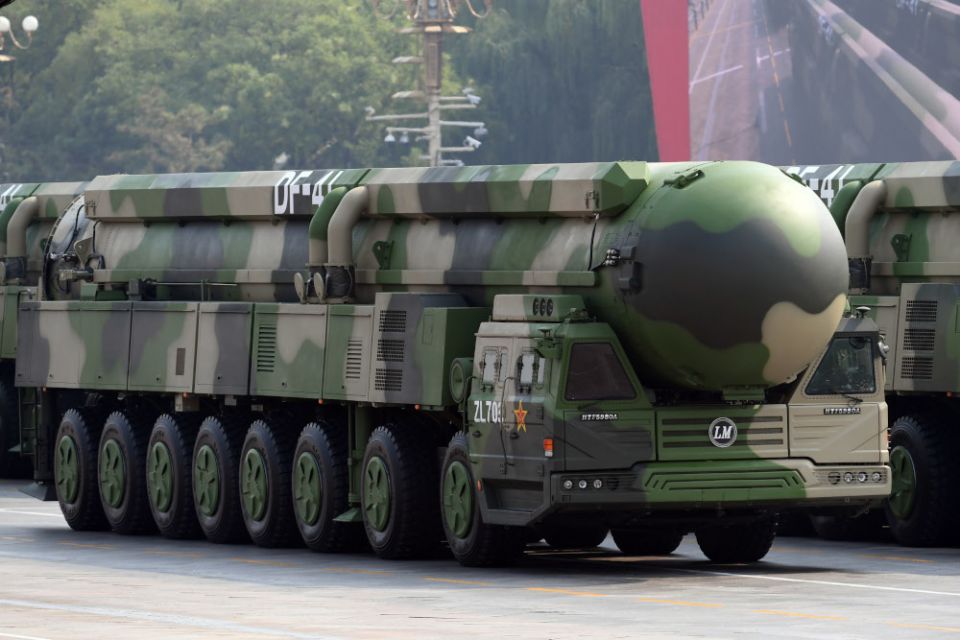 Cleveland — The Japanese cities of Hiroshima and Nagasaki were destroyed by atomic bomb explosions 75 years ago this August, hastening the end of World War II.

And while a nuclear arms race emerged during the 1960s before arms control agreements took hold in the 1970s and 1980s, such weapons have not been deployed in warfare since.

Nuclear disarmament advocates want to keep it that way. But they are becoming increasingly concerned that despite significant reductions in nuclear arsenals by the United States and Russia, a new arms race threatens to upend the progress made over the last half-century.

What alarms people such as Bishop John E. Stowe of Lexington, Kentucky, bishop president of Pax Christi USA, is that the threat nuclear weapons continue to pose to the world is "off the radar screen for so many people."

"We haven’t sensed the urgency about the nuclear question for a while," he told Catholic News Service.

With climate change in recent years and now the rise of the coronavirus pandemic, the push for racial justice and worldwide economic upheaval commanding attention, "the public consciousness on nuclear weapons is not there and the immediate threat is not seen," agreed David Cortright, director of policy studies at the University of Notre Dame's Kroc Institute for International Peace Studies.

Cortright and other observers contend arms control has lost momentum in recent years as treaties that limit the size of arsenals collapse, nonstate actors seek out a nuclear device to legitimize their status, deep-seated polarization keeps politicians apart, and political instability in some countries exposes existing stockpiles of weapons to rogue parties.

Yet, for disarmament advocates there is little reason to abandon hope. They have resisted and organized against anti-disarmament voices for decades. More recently they have had Pope Francis and his repeated castigation of nuclear weapons propelling them forward.

Throughout his papacy, Francis has appealed to the world's nine nuclear weapons-possessing nations to dismantle their arsenals for the good of humanity. In January, while giving his annual address to diplomats accredited to the Vatican, he reiterated his call for a world without nuclear weapons, saying "true peace cannot be built on the threat of a possible total annihilation of humanity."

"These weapons do not only foster a climate of fear, suspicion and hostility," he said. "They also destroy hope. Their use is immoral, a crime not only against the dignity of human beings but against any possible future for our common home."

His words echoed the message of his 2015 encyclical on care for the earth, "Laudato Si', on Care for Our Common Home." 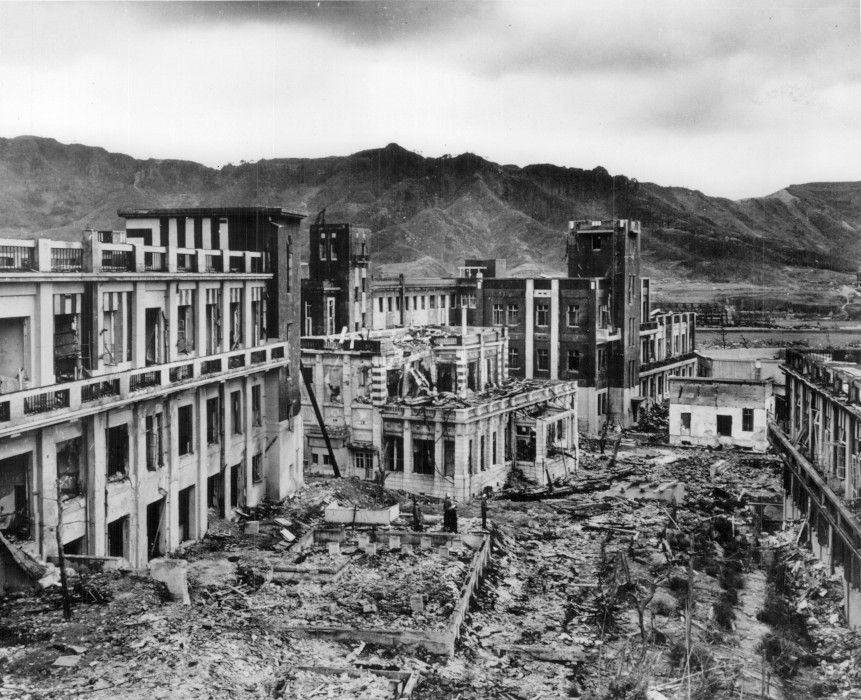 Advocates have suggested it is time for the world to heed the pope's words. They also urged bishops' conferences worldwide to become more vocal in supporting the pope's stance.

Marie Dennis, senior adviser to the secretary general of Pax Christi International, based in Brussels, Belgium, said the pope's consistent instruction has made an impression on a slowly growing contingent of people worldwide. She said she is inspired by the work of young people who are tying the existence of nuclear weapons to other threats to the planet including climate change, famine and extreme poverty.

"When you get outside of the United States, there is a lot of energy to get rid of these weapons," she told CNS. "There is a global recognition that we've got to do something different."

Dennis' Pax Christi colleague, Mary Yelenick, cited the adoption in 2017 of the Treaty on the Prohibition of Nuclear Weapons by 122 United Nations member states as a sign that the world wanted to tell the nuclear powers their vision must change.

Yelenick, the organization's main representative at the U.N., said passage of the treaty became possible when the U.S. diplomats apparently wrote off the effort and failed to attend sessions at which the pact was discussed. Without U.S. officials present, other nations freely discussed their concerns and realized that their stance on prohibiting nuclear weapons was widely shared, she said.

The treaty goes into effect when 50 nations ratify it. The U.N. reported in mid-July that 38 nations have done so, with the Holy See being among the first.

The Vatican's moral stance on nuclear weapons extends back to the papacy of St. John XXIII and has been an important voice for the world to hear, said Jesuit Fr. Drew Christiansen, professor of ethics and global development at Georgetown University.

He called for the U.S. to end its isolation on nuclear weapons and other issues that have international consequences. "We're not seeing each other as part of the human family," he said.

Francis' efforts on disarmament also can guide the world as it observes the 75th anniversary of the bombings, Christiansen said, urging that thinking about the end of World War II must focus on more than an Allied victory.

Christiansen also suggested the anniversary be seen through the lens of broader religious values and the views of people around the world.

"It seems to me out of that, different attitudes can come, an attitude of listening to those who suffer at times of war," he said, including those in the military suffering post-traumatic stress disorder and the hibakusha, the Japanese survivors of the atomic blasts. 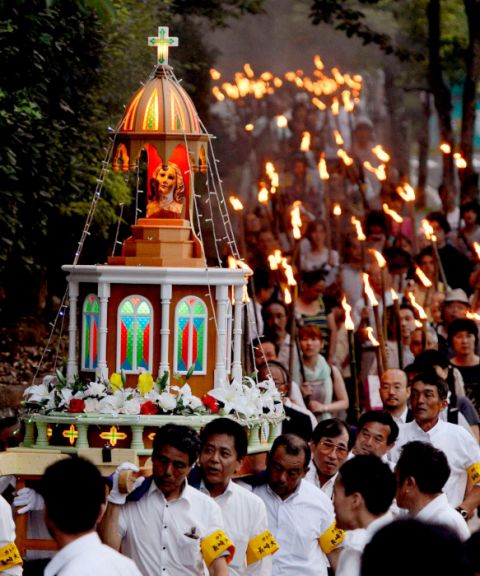 People carry the remains of a statue of Mary that survived the atomic blast over Nagasaki, Japan, as they march through the streets of the city Aug. 9, 2012. (CNS/Reuters/Kyodo)

"With that can come some reconciliation," Christiansen said. "We can also come to consciousness of the destructiveness of nuclear weapons. Therefore, we see we need to control them, and assess how the world has gotten in the last few years in respect to the revival of the nuclear arms race."

The Catholic Church can have major influence on efforts to rid the world of nuclear weapons if priests and bishops follow the pope's lead, said Kelsey Davenport, director of nonproliferation policy at the Arms Control Association.

"Right now with the international community so polarized, with the United States and Russia sparring on myriad issues, high level leaders with moral authority can play an important role in trying to mediate between the two sides in calling for action and trying to suggest concrete steps to reduce risk," Davenport explained.

"Historically Catholics have played an important role in steps that have reduced nuclear risk and the church can do so again," she continued. "But we need a broad call to action, and if the Catholic community is hearing the pope's message on nuclear disarmament from the pulpit that can go a long way in encouraging individuals to recognize their own responsibility in pushing nuclear disarmament."

Stowe noted that the anniversary of the Hiroshima bombing, Aug. 6, falls on the feast of the Transfiguration. He said the miraculous event that revealed Jesus' divine nature to a handful of apostles offers an opportunity "to assess where we are" on the possession of nuclear weapons.

Grassroots efforts have been undertaken to tie prayer to action for raising awareness about nuclear weapons. Pax Christi of Northern California, for example, has introduced an annual Mass for peace and remembrance of the victims of nuclear war.

Last year's liturgy in November, the first of what member Pierre Thompson said he hopes will be many, offered attendees a chance to reflect on the pope's words on nuclear weapons and their harm to people.

"The usage of nuclear weapons [in Japan] as well as the continued testing over the years has caused a great deal of harm to people, to the environment," Thompson told CNS. "The whole system of preparing for nuclear war also causes harm because it diverts resources from other important causes like health and education."

He said victims of nuclear weapons extend beyond hibakusha to include people forcibly removed from Pacific islands to allow for atomic testing and residents of the former Soviet Union, as well as India and Pakistan, two nations that have nuclear-tipped missiles pointed at each other.

Thompson said Masses for peace, sharing the pope's teaching and other programs can serve to help Catholics overcome complacency and indifference.

"I see this has very fertile ground," he said.