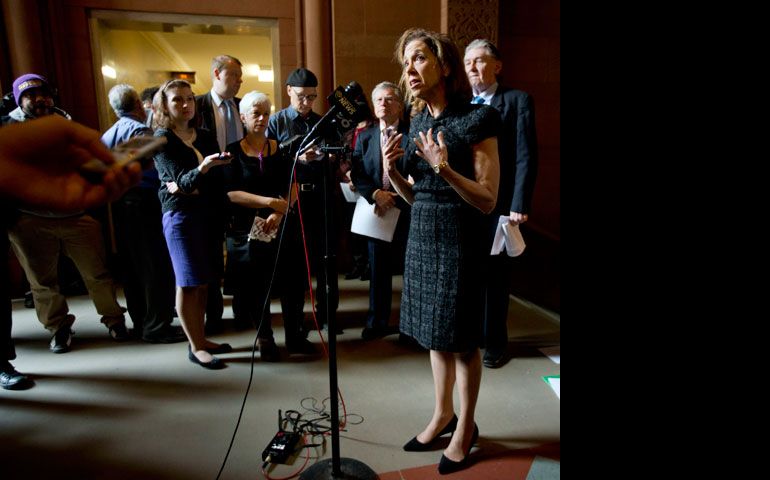 New York state Assemblywoman Amy Paulin speaks about her legislation to legalize aid in dying during a news conference at the Capitol Feb. 9 in Albany, N.Y. (AP Photo/Mike Groll)

New York — Advocates for physician-assisted suicide are on a roll as they hope to parlay their West Coast momentum to the Empire State.

Bills introduced in the New York State Legislature this session would allow terminally ill patients -- those who have been given a diagnosis of six months or less to live -- to request a lethal dose of drugs from two physicians. They must prove themselves mentally capable and have two witnesses to their request.

Physician-assisted suicide, also known as aid in dying, is legal in Oregon and Washington, and will soon be in California, as a newly passed bill there becomes law. Vermont and Montana also allow for the practice. It has been legal in Oregon for 18 years, longer than any other state.

Among its opponents are the New York state Catholic bishops, who, as in other states, argue that allowing physicians to kill dying patients violates medical ethics and will be used against the poor, the lonely and the forgotten.

Corinne Carey, state campaign director for Compassion & Choices, a proponent of the bills, said her group is framing the issue around religious freedom.

"Religious freedom means that people have the right to live their lives the way they believe," she said, noting that the bills have appropriate safeguards in place. Carey, a Catholic herself, says that Catholics around the state are supportive.

Political decisions in New York are often made by what is described as three men in a room: the governor; the Assembly speaker, almost always a Democrat; and a Republican State Senate leader. The most recent Assembly speaker and Senate leader have been convicted of corruption and are awaiting sentencing.

As new leadership in the legislature emerges, the political lines may be shifting. How that will affect the proposed assisted suicide legislation is not known. Gov. Andrew Cuomo remains undecided, although opponents of the bills note that the governor's late father, Mario Cuomo, appointed a commission when he was governor that opposed assisted suicide.

The early part of the legislative session is devoted to budgetary concerns; if the bills are to move, there is unlikely to be action until late spring.

Opponents are assembling a coalition that includes advocates for the disabled, the terminally ill, hospice caregivers and the elderly.

Supporters of the measure point to the dramatic story of Brittany Maynard, who, after suffering from brain cancer, died at age 29 in 2014 after taking a lethal dose of pills. A Californian, she moved to Oregon to take advantage of legalized assisted suicide. Her story, featured on CBS' "60 Minutes," provided an impetus for changing the law in California.

"She changed the face of the movement," said Carey. Before Maynard publicly emerged, four states were considering aid-in-dying legislation. There are now 25, including New York.

New York opponents have enlisted the support of J.J. Hanson, a former aide to Govs. Eliot Spitzer and David Paterson. Hanson has also been diagnosed with brain cancer. In May 2013, he was given four months to live. His cancer is now considered in remission.

Speaking at a March 8 press conference in Albany organized by assisted-suicide opponents, Hanson, 34, said, "Doctors make mistakes. They are not always correct."

He said that assisted suicide targets the vulnerable, the disabled, poor, or those depressed about their condition. Hanson argued that promoting assisted suicide will impede efforts to cure rare diseases.

Michael Burgess, a former director of the Office for the Aging under Spitzer and Paterson, said that depression is a prime cause of suicide.

"We need to be talking about aid in living," he said at the press conference. "Sometimes [assisted dying] is a choice because people don't think that they have any other choices."

Carey said she is not certain that passage of the bills will come until after a deliberate and lengthy process.

"I don't expect quick passage," she told NCR. "New Yorkers deserve a thoughtful dialogue around this."

Salvadoran bishops call for respect of rule of law, constitution