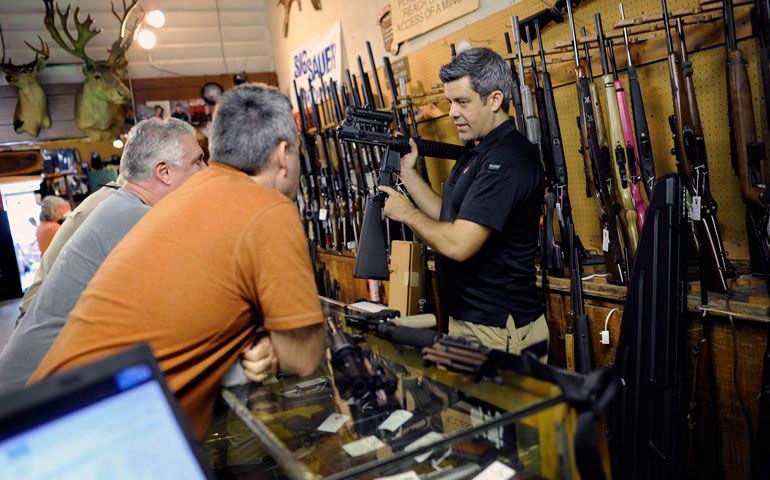 Washington — A wide coalition of 47 national Catholic and other religious leaders urged an assault weapons ban and other tough measures against gun violence the day before President Barack Obama announced gun control proposals that largely matched their pleas.

"Every person who buys a gun should pass a criminal background check," the religious leaders said in a letter to Congress that was released Jan. 15.

The next day, Obama, announcing executive decisions and legislative proposals based on recommendations of a task force headed by Vice President Joe Biden, called for universal background checks before all firearm sales.

"Gun trafficking should be made a federal crime," the religious leaders said. Obama called for new legislation with stiffer penalties and stricter enforcement against straw buyers who purchase weapons for others who would not pass a background check.

Among the 14 Catholic leaders who signed the letter to Congress were Bishop Stephen Blaire of Stockton, Calif., chairman of the U.S. bishops' Committee on Domestic Justice and Human Development; Daughter of Charity Sr. Carol Keehan, president and CEO of the Catholic Health Association; and Fr. Larry Snyder, president and CEO of Catholic Charities USA.

At a news conference in Washington Jan. 15, Keehan said the nation's Catholic hospitals see the results of gun violence "in our emergency rooms every day."

Keehan was one of several faith leaders who spoke at the media event, sponsored by Faiths United to Prevent Gun Violence and held at the United Methodist Building across the street from the U.S. Supreme Court.

"We know the cost, in lives and dollars, that could be prevented by a wiser gun policy and a better mental health safety net," she said.

"The Catholic church has spoken out for years about the urgency of reducing gun violence," she added. "Following the Newtown shooting [killing 20 children and six adult staff members at an elementary school in December], our bishops endorsed once again the effort to create a better gun ownership policy."

Keehan noted that she "saw the effects of gun violence firsthand" when she was president of Providence Hospital near The Catholic University of America in Washington. "I saw it in my emergency room when gang members would drive by and dump one of their comrades who had been shot, when people would come after them to finish the job, when people would come in dead that we could do nothing for. There were even people shot on our hospital grounds. When you work in an inner-city hospital, sadly, gun violence is all too routine."

"As we suggest these measures, we do so with great respect for our Constitution and the rights of hunters," she said, "but we join that to a respect for the lives of the people of our country. … I believe there is a balance between gun ownership and the broad availability of weapons that can only lead to tremendous violence."

The U.S. bishops "hope that the steps taken by the administration will help to build a culture of life," Blaire said in a Jan. 18 statement reacting to Obama's proposals.

"The frequent mass shootings over the course of 2012 reflected a tragic devaluing of human life, but also pointed to the moral duty of all people to take steps to defend it," Blaire said.

At the Jan. 15 news conference, the Rev. Jim Wallis, a prominent evangelical leader and president and CEO of the national Christian magazine Sojourners, challenged the declaration by National Rifle Association leader Wayne LaPierre, following the Dec. 14 mass killing at Sandy Hook Elementary School in Newtown, that "the only thing that stops a bad guy with a gun is a good guy with a gun."

"That statement is at the heart of the problem of gun violence in America today," Wallis said, "not just because it is factually flawed, which of course it is, but because it is morally mistaken, theologically dangerous and religiously repugnant."

"The world is not full of 'good' and 'bad' people," Wallis added. "That is not what our Scriptures teach us. We are as human beings both good and bad. … As individual persons we have both good and bad in us -- and when we are bad, or isolated, or angry or furious or vengeful, or politically agitated, or confused or lost, or deranged or unhinged, and we have the ability to get and use weapons only designed to kill large numbers of people, our society is in great danger."

"When such weapons are allowed to be used out of powerful emotions, without restraints or rules," he said, American parents cannot honestly tell their children that they are safe and free of danger. "We cannot because they are not."

Faiths United to Prevent Gun Violence was started two years ago by leaders of 24 national faith organizations, including Catholic, Protestant, interfaith, Jewish and Muslim groups. It has since grown to include at least 40 such groups.

Other stories in this series:

Researching gun epidemic is first step to solving it, an NCR Editorial