Opposition to GOP repeal bill inches up and intensifies 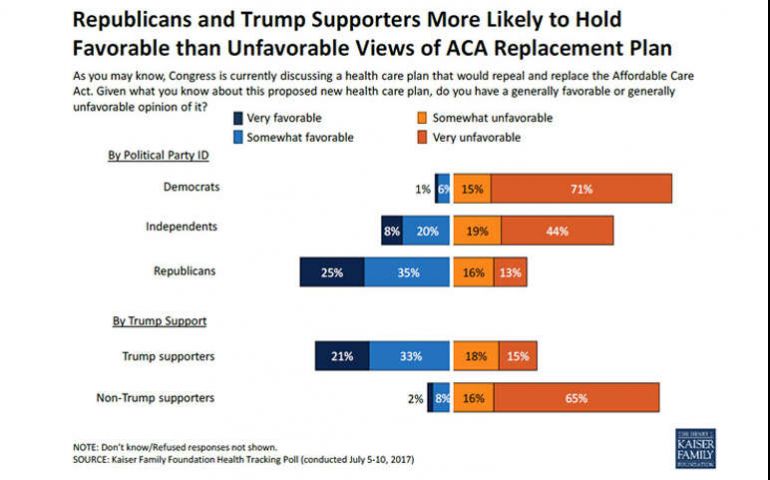 Public opposition to the Republican effort to replace the Affordable Care Act grew stronger this month, but a core group of Republicans remained in support, according to a poll released today (July 14).

Sixty-one percent of the public said this month they did not like the GOP health care effort, now undergoing a revised push in the Senate. That was a 6 percentage point increase from the Kaiser Family Foundation’s monthly tracking results in June, when 55 percent expressed unfavorable opinions. (Kaiser Health News is an editorially independent program of the foundation.)

The poll also found opposition was becoming more passionate, with more of the public viewing the plan “very” unfavorably. The Affordable Care Act maintained the support of half the populace, nearly double the 28 percent of people who backed the GOP efforts. Two of three people opposed major reductions in Medicaid that are included in the GOP plans.

Nonetheless, a majority of Republicans and supporters of President Trump continued to favor the GOP plan, which would increase the number of uninsured as it alters Medicaid and the private insurance markets that have been running since 2014. In fact, in this month’s poll more Republicans said health care is headed in the right direction than believed that in April, before the House passed its version of the health care replacement bill.

Still, most Americans said they would prefer Republicans and Democrats to work together on health care — 71 percent said they would like to see a bipartisan effort to fix the ACA.

The poll of 1,187 adults was conducted July 5 – 10, about a week after the Congressional Budget Office issued its report on the GOP draft legislation. The margin of error was plus or minus 3 points.

Politics | Opposition to GOP repeal bill inches up and intensifies

The never-ending debate on Obamacare