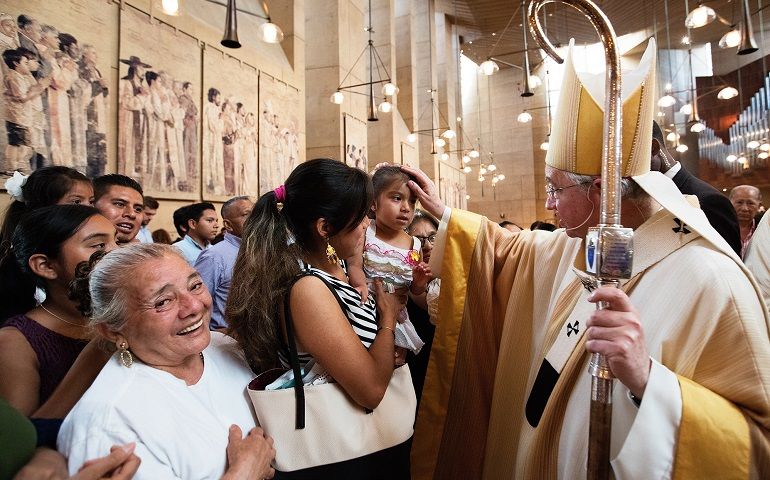 Archbishop José Gomez of Los Angeles blesses a girl during a special Mass celebrated July 17 in recognition of all immigrants at the Cathedral of Our Lady of the Angels in Los Angeles. (CNS/Vida Nueva/Victor Aleman)
This article appears in the Election 2016 feature series. View the full series.

Washington — The term "immigrant church" has an historic resonance in Catholic circles, shorthand for the waves of white Europeans who fashioned — both in reality and the cultural imagination — what it means to be Catholic in the United States.

That reality, if not yet the imagination, is changing dramatically and rapidly and is having a noticeable effect on "the Catholic vote," the topic of discussion Monday morning by a panel assembled by the Catholic University of America's Institute for Policy Research & Catholic Studies and the Public Religion Research Institute.

Catholic voters make up about one-fifth of the entire electorate, said Stephen Schneck, director of the institute at Catholic University. But just as there is no one political party that represents the "holistic unity of the church's teaching," neither is there a "meaningful" single block of Catholic voters who represent that ideal. Rather, he said, during the event at the National Press Club, "what we're talking about and what is usually talked about in contexts like this are voters who are Catholics, and not Catholic voters."

By whatever term, "a bit more" than 40 percent of Catholics lean Democratic and "a bit less" lean toward the Republican side, with 20 percent "true swing voters."

Demographically, said Schneck, "Catholics in America foreshadow where America as a whole is headed." The most telling number is that 43 percent of Catholics today are either first- or second-generation immigrants. The new immigrant church, however, is increasingly nonwhite, its members hailing from Africa, the Caribbean, East Asia and South Asia. The largest component of the first- and second-generation immigrants, about a third, are Latino.

"So the Hollywood image of American Catholicism as white ethnics — Irish, Italian, Polish and so on — that image is less and less an accurate one," said Schneck.

What about those white Catholics? They are older, more educated and have higher incomes than the rest; they're more assimilated and "generally more Americanized" than the others; and they are declining, both as a percentage but also in real numbers due to birth rates among other groups and the numbers of white Catholics leaving the church in recent years.

This year, said Schneck, it appears Catholics are moving into the Democratic column "more strongly than they have in recent elections," meaning Hillary Clinton is likely to win the support of the majority of voters who are Catholic.

What is going on in the Catholic voter world is reflective of trends in the wider populace, said Robert Jones, founding CEO of PRRI and author of The End of White Christian America. White Christians of all denominations, including Catholics, have been voting for Republican presidential candidates by roughly a 60-40 margin for at least the past three election cycles, said Jones. That results in a very wide gulf between white Christians and "everybody else leaning the other way."

Support for Democratic candidates during the same period, on the other hand, has come from "Hispanic Catholics, the religiously unaffiliated, Jewish Americans and African-American Protestants," he said. An example from the last election showed that Republican candidate Mitt Romney won among white Catholics by 19 points, but lost Latino Catholics by 54 points. "That's the split underneath the overall numbers," Jones said. While Catholic voters as a whole are moving in to the Democratic column, white Catholics tip for Republican candidate Donald Trump over Democrat Hillary Clinton, 48-41 percent.

María Teresa Kumar, founding president of Voto Latino, an advocacy group working to empower Latino youth, explained the heavy preference for Democrats among Latino voters as their interest in social justice issues and the differing views between the parties on immigration.

The explanation also lies, she said, in what Voto Latino realized in approaching its work.

"We started talking to young Latinos, using technology, speaking in English and recognizing their innate leadership," she said. When the group began 12 years ago, she said, the organization realized "that long before these young Latinos turn 18 years old, they are navigating America for their parents." Recognizing the responsibility young American Latinos are taking on themselves, she asked, the organization helps them to also engage in politics.

This year she said, Voto Latino set a goal of registering 75,000 new Latino voters in strategic states. To date, she said, they had registered a total of 177,000.

"And then you fast forward from self-deportation to build the wall," a claim Trump has made. That has an effect, Kumar said, on the 6.5 million Americans who are members of a mixed family, meaning that someone in the family is undocumented. Among those families, she said, are 1.5 million eligible voters.

Looking at the current political situation for Hispanics through the Catholic perspective is not the norm, but it may be the best way to understand it, she said.

"When you talk about issues of social justice, poverty alleviation, environment, immigration, social equity, all of a sudden you see an alertness among the Latino population" because those issues "disproportionately affect that population. I also think right now you're seeing a renaissance within Catholicism because for many Latinos, the pope [Francis] is the one we've been waiting for because he speaks to those issues of equity, of social justice, and the environment," Kumar said.

Washington Post columnist E.J. Dionne asked whether Catholics had become like so many other believers in the culture where "ideology trumps religion." He noted that in two recent weekends he went to Mass at two different churches. "I was struck that at the more conservative parish, the prayer of the faithful focused on abortion and right to life. And the other parish I went to, the first prayer of the faithful focused on 'may we be welcoming to all, may we not exclude strangers.' You see this right at the parish level all over our country."

Referencing a C.S. Lewis line about Christians not reading the Gospel for enlightenment on political questions, but "ransacking it" for support of their already established positions, he wondered if Catholics could be honest enough to admit that was sometimes the case in our politics today.

While Dionne has noticed this year that even the most conservative bishops toned down their Republican leanings because of Trump, Cokie Roberts of ABC News, who moderated the panel, said she still detected that the hierarchy's framing of the issues focused on single issue politics.

"When you talk about the Catholic vote," she said, "you cannot ignore the role of the hierarchy in past elections and how it has pushed people to believe there is only one issue that is a Catholic issue." If young Latinos are also concerned about social justice issues, Roberts said, they will be important not only in fully representing the Catholic church "but also in keeping the church alive."