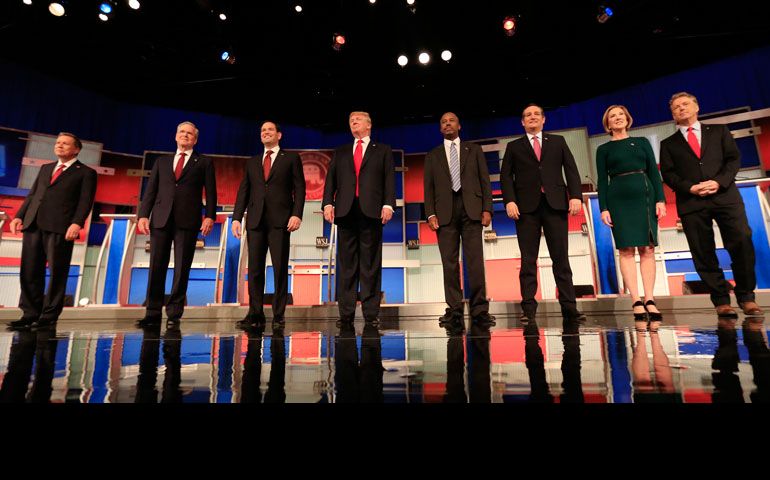 By this time next year, the American people will have selected a new president. Only once in the 20th century was a two-term incumbent president succeeded by someone from his own party: In 1988, George H.W. Bush captured the White House after Ronald Reagan's two terms. So, if history is any guide, 2016 should be a good year for the Republicans, except that the current crop of GOP contenders are all trying to out-crazy each other.

When Donald Trump entered the race this summer and shot to the top of the polls, pundit after pundit predicted his balloon would pop and descend as quickly as it rose. We were told Trump's rise was mostly about his omnipresent name recognition. Then we were told it was his showmanship that accounted for his continuing atop the leader board.

When he would make the kind of misstep that would have sunk any other candidate, implying Latino immigrants are mostly drug dealers and rapists, questioning John McCain's patriotism, hurling misogynistic insults, TV's talking heads knew the game was up. But here it is in December, and Trump is still leading most national polls and most state polls also.

The Trump phenomenon is partly due to the free media he has garnered with his unvarnished TV interviews and winning stump speeches. But he has also struck a deep chord with working-class Americans who have seen their wages stagnate, their pensions disappear, and their health care costs continue to rise. These workers remember when America was great for them, and Trump's promise to make America great again resonates.

Trump's nativist rants present an always-serviceable scapegoat for the populist right wing: the immigrants. It is difficult to imagine Trump winning the nomination, but every pundit I know has given up making predictions in this regard.

Running second in most polls is the even less likely presidential standard-bearer Dr. Ben Carson. I confess I am utterly at a loss to explain his appeal to anyone, even to conservative evangelicals who constitute the core of his supporters. Carson's problem is the same as that which afflicted Sarah Palin: It is not that he does not know the answer to basic questions of governmental policy; it is that he does not understand the questions.

After November's FOX Business Network debate, GOP strategist Steve Schmidt characterized Carson's responses as "gibberish" and, indeed, they were. Trump's continued rise may defy predictions. If Carson continues to do well in the polls, I suspect the end times are drawing nigh.

In a normal year, former Florida Gov. Jeb Bush would be one of the leaders in the polls. But his debate performances have been listless and his stump speeches are meandering and idiosyncratic. In 1999, when his brother George W. Bush's frequent verbal miscues raised many eyebrows, it was suggested that the GOP had picked the wrong Bush brother for the presidential race. Turns out, the Republicans were right.

George W. had an easy charm. He could fight through his verbal sloppiness and connect with voters. Jeb seems reluctant to get into the fray, his obvious command of policy details is unconnected to any broader narrative justifying his candidacy, and his donor base has become quiescent. If he does not catch fire in New Hampshire, his candidacy is over and the "establishment," insofar as such a thing still exists, will need to look elsewhere.

With Wisconsin Gov. Scott Walker already out of the race, the leading candidate to inherit the establishment lane is Bush's fellow Floridian Sen. Marco Rubio. Indeed, after months of immigrant-bashing, Rubio's Hispanic heritage may be seen as essential for GOP success in November, even though most Latinos have a bit of a grudge against Cubans, who gain legal status the second they touch American soil.

Rubio's earlier support for immigration reform may also cripple his chances to win over Trump supporters. But his youthful appearance and forward-looking stump speeches set up an interesting contrast with expected Democratic nominee Hillary Clinton, whose very name has a backward-looking feel about it.

Rubio's problem is that he seems unable to say very much that is not in his stump speech. His sentences all sound like he is reading from a bumper sticker, not a teleprompter. It is not clear there is much there.

Which leaves the only other candidate polling in double digits, Sen. Ted Cruz of Texas. Cruz is relentlessly on message, and his message, like Trump's, is designed to appeal to the anxieties and prejudices of white working-class voters.

He is 20 times smarter than Rubio and 50 times more energetic than Bush. He wears his brand of conservative Christianity on his sleeve, making him the most likely person to inherit Carson's support when the doctor implodes.

The problem is that Cruz may be the most thoroughly demagogic person in American politics since Huey Long. That may not hurt him in a GOP primary, especially when the primary season hits the Southern states, but it is hard to imagine him wearing well in a general election.

When the nominating season kicked off this summer, Republicans crowed about their deep bench and their wealth of talent. The debates have shown something different, more akin to the island of misfit toys. One of those toys, however, will win the nomination next summer and go on to face the Democrats. Which one will it be? If I were a betting man, and I am not, I would put my money on Cruz.

Column | Placing your bets on the island of misfit toys

With his Communion ban, Cordileone harms the church more than Pelosi does