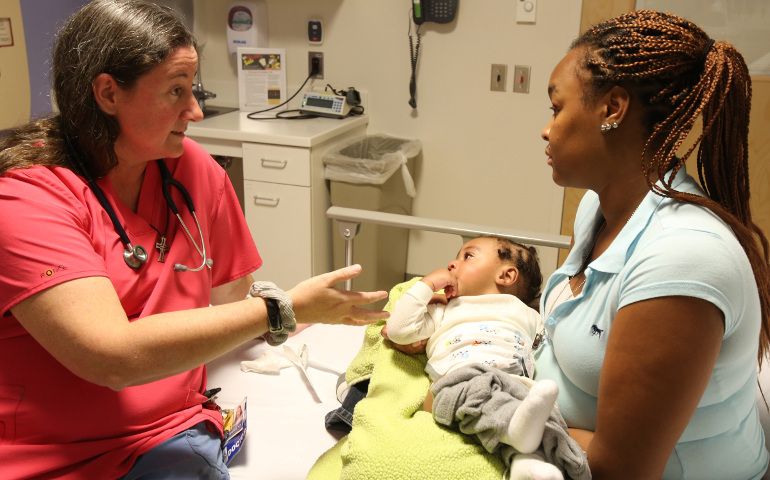 Mercy Sr. Karen Schneider, who is a pediatrician, talks with the mother of a child in the emergency room at Johns Hopkins Hospital in Baltimore in 2014. (CNS / Bob Roller)

Washington — U.S. health care seemed stuck in the waiting room for part of the year, holding out for its future prognosis from courtroom and political decisions.

During the election year talk, health care as a whole was not a top issue as it competed against the economy, terrorism, foreign policy, gun control and immigration.

What did come up was the Affordable Care Act, which became law in 201, and was fully implemented in 2015 and has already been upheld twice by the U.S. Supreme Court.

For now, the future of the health care law remains unclear until the new administration takes control in the new year. President-elect Donald Trump and congressional Republicans have vowed to repeal and replace the law.

The Catholic church has had concerns with the Affordable Care Act. The U.S. Catholic bishops and Catholic hospitals have long emphasized that the poor and vulnerable must have access to health care, and the U.S. Conference of Catholic Bishops, in a 2010 letter to Congress, stressed that health care is "a basic human right" and "universal coverage should be truly universal." The health care law through federal and state exchanges allows people even with limited income to get subsidies to have a health care plan.

But there are still questions about coverage of abortion by health care plans and for church leaders, a major sticking point with the legislation also has been its contraceptive mandate — challenged in courts and sent back to the lower courts by the Supreme Court this past summer. The dispute has been over the Department of Health and Human Services' requirement that all employers, including most religious employers, provide contraceptive coverage in employees' health plans even if the employer morally objects to the coverage. The mandate provides a narrow religious exemption for houses of worship.

Even though the Supreme Court hoped the two sides could work out a compromise, that never happened and lawyers on both sides have instead been applying for extended deadlines to work it out.

But the mood changed somewhat after Trump was elected in a campaign in which he said he is pro-life, causing the Little Sisters of the Poor and other religious employers that had challenged the mandate to cautiously breathe a sigh of relief.

"Everyone is still protected by the Supreme Court's order, but they know with a new administration it could change in minutes," said Mark Rienzi, lead attorney for the Becket Fund for Religious Liberty, which represented the Little Sisters of the Poor.

Rienzi seems confident Trump's campaign promises to repeal some or all of the Affordable Care Act would very likely take the contraceptive issue off the table.

"We feel optimistic," he told Catholic News Service Nov. 22, stressing that a major part of Trump's victory stemmed from religious voters convinced he would best represent them with pro-life policies and Supreme Court nominee picks.

And since the health law falls under HHS, many have been looking at Trump's pick to head that agency, Rep. Tom Price, R-Georgia, a physician and a critic of the Affordable Care Act. He, too, supports repealing it or at least its contraceptive mandate.

Carol Tobias, president of National Right to Life, praised Trump's selection of Price for the post, saying he has a "strong record in defense of innocent human life" and "will empower the Department of Health and Human Services to protect the most vulnerable members of our society."

Prior to the election, Sr. Carol Keehan, a Daughter of Charity, who is president and CEO of the Catholic Health Association, said Catholic voters should be concerned that health care is accessible to everyone and that "people get health care they need, not health care they can afford."

She said a major concern is that millions of people still do not have access to health care, which she said has been a clear teaching of the popes from the previous eight or 10 popes to Pope Francis. She also stressed that "affordable health care is a non-negotiable priority in church teaching" and that a lack of access to health care not only causes early death but also suffering.

This year, besides defending the need for affordable health care, as she has in previous years, Keehan also has been outspoken in defending Catholic hospitals when they have faced criticisms and been the target of lawsuits.

This past spring, the American Civil Liberties Union issued a report called "Health Care Denied" that argued women's lives were jeopardized because Catholic hospitals, in adhering to church teaching, do not perform abortions, sterilizations and other "reproductive health" procedures.

The ACLU has represented women in a number of lawsuits brought against Catholic hospitals based on the same issue that to date have been dismissed.

This past summer, a small study in a health journal also suggested that Catholic hospitals were not able to fully care for women who encountered emergencies during their pregnancies and faulted them for not making referrals for abortions or sterilization procedures.

Keehan acknowledged that Catholic hospitals will not make abortion referrals or offer sterilizations, but she told CNS that these hospitals are fully equipped to deal with crisis pregnancies and are particularly competent in maternal and infant care.

She also told America magazine, a monthly Jesuit publication, that the journal's report reflected "a common misperception among a growing and aggressive chorus of critics of Catholic health care" that say the U.S. bishops' "Ethical and Religious Directives for Catholic Health Care Services" prevents Catholic hospitals from acting in the best interests of women, especially those whose pregnancies are in crisis.

As she put it: "Many Catholic hospitals are the high-risk maternity facility for their area and have an incredible history" of helping women.

Catholic hospitals also have been the focus of a pension battle that the Supreme Court agreed in early December to look at next year. The dispute is whether religious hospitals and schools can be exempt from complying with federal laws covering employee pension benefits.

Two of the three hospital systems in the suit coming before the high court are Catholic. They argue that as church-affiliated organizations, they are exempt from providing some pension benefits. Their employees, and the lower courts, have said these pensions do not qualify as "church plans."

During a panel discussion about health care in November at Georgetown University, Dr. Lester Ruppersberger, president of the Catholic Medical Association, said his organization has long recognized the need for U.S. health care reform.

He said the group's 2004 white paper, "Health Care in America: A Catholic Proposal for Renewal" — which offered specific policy proposals based on Catholic moral and social teaching — was still relevant today because it points to a crisis in American health care stemming from the lack of health insurance coverage for millions of Americans in 2004 and even today.

"Changes in public policy are needed to foster a renewed climate in which individuals and families are free to make decision about their health care and its source based upon conscience," he said.

In the Hobby Lobby case before the Supreme Court, law is not ethics