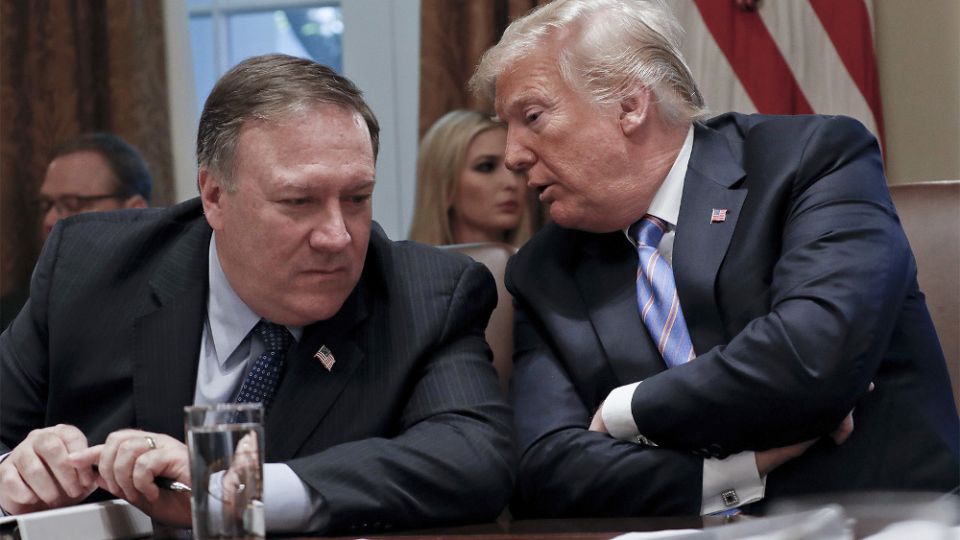 President Trump, right, talks with Secretary of State Mike Pompeo during a Cabinet meeting in the Cabinet Room of the White House in Washington, on July 18, 2018. (AP/Pablo Martinez Monsivais)

Russia dominated the discussion on a telephone conference call with reporters and Secretary of State Mike Pompeo on Thursday morning (July 19) about next week's meeting in Washington of government officials, religious leaders and representatives of nonprofit organizations to talk about international religious freedom.

Asked about reports of Russian efforts to infiltrate American religious groups, even while suppressing faith groups at home, Pompeo said the State Department is "concerned anytime any country attempts to interfere with religious freedom of any individual anyplace and anywhere."

The secretary also told reporters that the department was "hopeful" President Trump's engagement with Russian President Vladimir Putin earlier this week in Helsinki "puts us in a direction where the conversations we can have with the Russians can begin to turn this in the right direction."

"That was the president's objective in going to Helsinki, and I am confident that we achieved that," he said.

White House officials said later in the day that Trump plans to invite Putin to Washington for a follow-up to the Helsinki summit in the fall.

Pompeo announced the first Ministerial to Advance Religious Freedom in May while unveiling the State Department's annual International Religious Freedom Report, saying he looked forward to meeting with his "counterparts from like-minded governments." That includes officials from 80 countries that have a record of advancing religious freedom or that recently have taken meaningful steps toward doing so, according to the State Department.

On Thursday's call, Pompeo declined to answer whether Russia will send a delegation to the ministerial, saying the State Department still is receiving RSVPs and wouldn't release the list of attendees beforehand.

"We believe this first-ever gathering of leaders around the world to promote religious freedom is important and will move many countries in the right direction on religious freedom. We think that's an invaluable part of American diplomacy and the capacity to shape America's vision in the world," Pompeo said.

Pompeo also did not directly answer questions about whether Trump had addressed religious freedom concerns during his private meeting with Putin this week. But, Pompeo said, "This administration has been incredibly strong when it comes to pushing back against Russian bad behavior across its broad range of bad behaviors, and we will continue to do so."

Both the International Religious Freedom report and the United States Commission on International Religious Freedom's annual report have documented Russia's abuses of religious freedom. The latter document placed Russia in its top tier of countries of particular concern this year, noting the country's recent ban on Jehovah's Witnesses and the kidnapping, torture and imprisonment of Crimean Tartar Muslims in Russian-occupied Crimea. 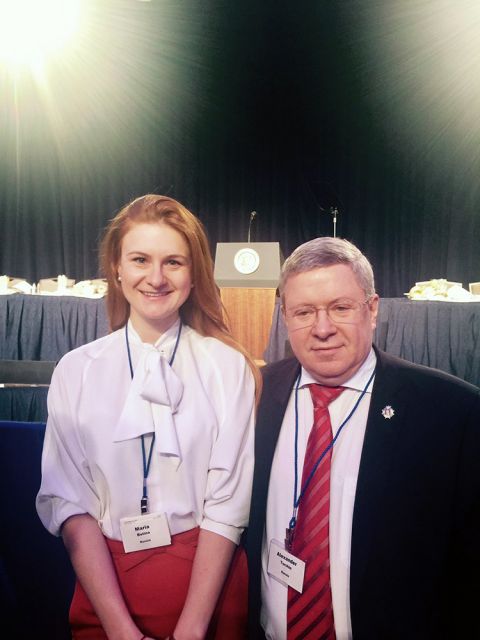 The country's respect for religious groups was further tarnished this week, as the Department of Justice unsealed an affidavit showing Mariia Butina, a Russian citizen living in the U.S., intended to use the 2017 National Prayer Breakfast as a way to "establish a back channel of communication" between influential Russians and Americans. Previous testimony to the House Intelligence Committee also noted the possibility of Russian efforts to infiltrate American religious groups.

Qamar-ul Huda, a senior adviser to the State Department from 2014 until last summer who has advised the Trump State Department on the ministerial, said the event reflected a desire to make religious freedom a primary issue for the Trump administration. That includes an attempt to widen the conversation beyond foreign ministers with side events hosted by the Religious Freedom Center at the Freedom Forum Institute/Newseum and other organizations.

After the Office of International Religious Freedom was created 20 years ago within the department, Huda said, "The next chapter is to see its impact and how to mainstream it."

But not everyone is as enthusiastic about the Trump State Department's approach to religious freedom. Shaun Casey, who launched the department's Office of Religion and Global Affairs under former Secretary of State John Kerry, called it "arguably the worst administration in history on religious freedom" and "a dramatic step back."

The Trump administration's "actual policies betray the alleged purpose of this meeting, which is to bring freedom for all people," Casey said.

He pointed to the president's approval of the Dakota Access Pipeline on land considered sacred to the Standing Rock Sioux, several iterations of a travel ban that he said discriminated against Muslims and policies that have separated families at the U.S.-Mexico border, when religious persecution is one reason people can apply for asylum.

"This is a made-for-television movie designed to impress a narrow set of American religious communities, part of the Trump political base," he said.

Participants in the Ministerial to Advance Religious Freedom will hear from survivors of religious persecution, as well as Pompeo; Sam Brownback, U.S. ambassador-at-large for international religious freedom; and Vice President Mike Pence.

The State Department's website said the focus of the event will be on finding "concrete ways" to fight religious persecution and discrimination and to ensure religious freedom for all.

It will offer information about how groups can access financial support from the U.S., as well as breakout sessions on the intersections between religious freedom and topics such as women's rights and countering violent extremism. Other breakout sessions will focus on such things as confronting legal challenges to religious freedom, preserving cultural heritage and supporting victims of religious violence.