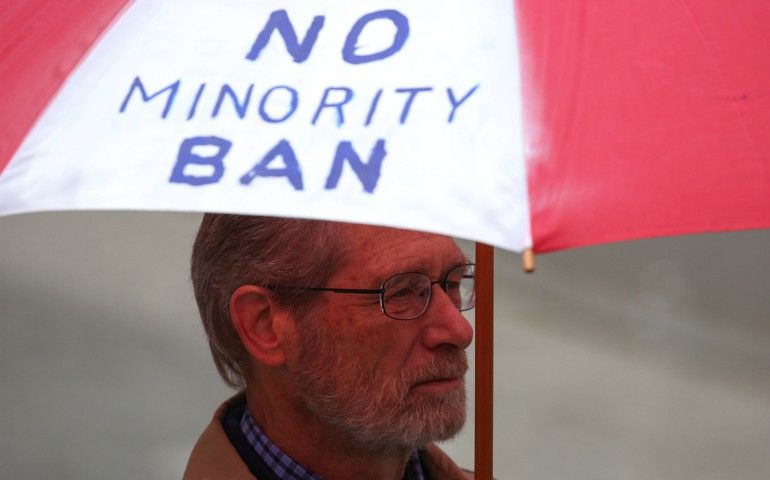 A man holds an umbrella during a protest in Seattle May 15 against President Donald Trump's travel ban. The U.S. Court of Appeals for the 4th Circuit, based in Virginia, issued a 10-3 ruling May 25 to uphold a Maryland federal court's injunction against the temporary ban. (CNS photo/David Ryder, Reuters)

Washington — In a series of tweets June 5, U.S. President Donald Trump seemed to express frustration with his own lawyers' efforts to push forward with a revised version of a plan that seeks to temporarily ban travelers and refugees from certain majority Muslim countries, and said the lawyers "should have stayed with the original travel ban."

On June 1, the U.S. Department of Justice asked the U.S. Supreme Court to overturn decisions by lower courts blocking the travel ban. The Justice Department is seeking a way to implement the president's troubled executive order, which the other lower courts have blocked saying it unfairly targets Muslims, despite a revision — one that the president criticized as "watered down" on Twitter.

The Supreme Court of the United States has given opponents of the travel ban until June 12 to respond to the government's request to allow immediate implementation of the executive order.

It's hard to say what impact the president's words — and tweets — will have on any decision by the high court, but he vented his frustrations against the courts calling them in tweets "slow and political."

The 9th U.S. Circuit Court of Appeals as well as the 4th U.S. Circuit Court of Appeals have heard arguments for and against the order that aims to prevent citizens from six majority-Muslim countries from entering the United States for a period of 90 days. It also asks that refugees wait 120 days before entering the country and cuts the number of refugees the U.S. accepts each year to 50,000. The U.S. previously had accepted up to 110,000.

It's been highly expected that the fate of the order would eventually be decided by the justices of the highest court of the land, but the Trump administration is trying to speed up the pace of that decision and wants the order implemented while the Supreme Court decides.

On May 25, the 4th U.S. Circuit Court of Appeals — as a three-judge panel of the 9th Circuit before it — rejected its implementation, saying that the order "drips with religious intolerance, animus and discrimination" and in 10-3 ruling upheld a lower court's injunction to keep the ban from going into effect. Many of the arguments against the executive order have pointed to the president's remarks against Muslims, during and after the campaign, including some remarks he has made via Twitter.

"We need to be smart, vigilant and tough. We need the courts to give us back our rights. We need the travel ban as an extra level of safety!" the president tweeted June 3 as news about terrorist attacks in London flashed in headlines around the world.

Some judges have asked why the president's statements, past or present, should matter in deciding the intent of an executive order. In a strongly worded dissent, Judge Paul Niemeyer of the 4th Circuit said the majority's reliance on campaign statements for its ruling "to impose a new meaning on an unambiguous executive order is completely strange to judicial analysis."

Lawyers for the government have said the president wants to protect the country from potential acts of terrorism and is not seeking to discriminate against Muslims. But some think that the president isn't helping the Justice Department make its case by making public statements such as the one he tweeted June 5, saying: "In any event we are EXTREME VETTING people coming into the U.S. in order to help keep our country safe."

In a White House news briefing shortly after the barrage of Trump's tweets on the travel ban, Deputy Press Secretary Sarah Huckabee Sanders said communicating via social media is "really important" for the president because it gives him a way to communicate "that isn't filtered through media bias."

On the same day, The Associated Press reported that New York lawyer George T. Conway III, husband to White House adviser Kellyanne Conway, criticized the president's tweets saying — also via Twitter — that while Trump's remarks may make some people "feel better," they won't help the Office of the Solicitor General, which conducts government litigation before the Supreme Court, "get 5 votes," or the majority needed for the order to be considered constitutional.

The U.S. Conference of Catholic Bishops have said the initial executive order as well as its revision is troubling, particularly because of the consequences of keeping out refugees seeking to escape dangerous situations.

"The revised order ... still leaves many innocent lives at risk," said Bishop Joe S. Vasquez of Austin, Texas, who is chair of the USCCB's Committee on Migration, in the statement after the March 6 revision of the executive order. He added that the bishops and the church "believe in assisting all those who are vulnerable and fleeing persecution, regardless of their religion."