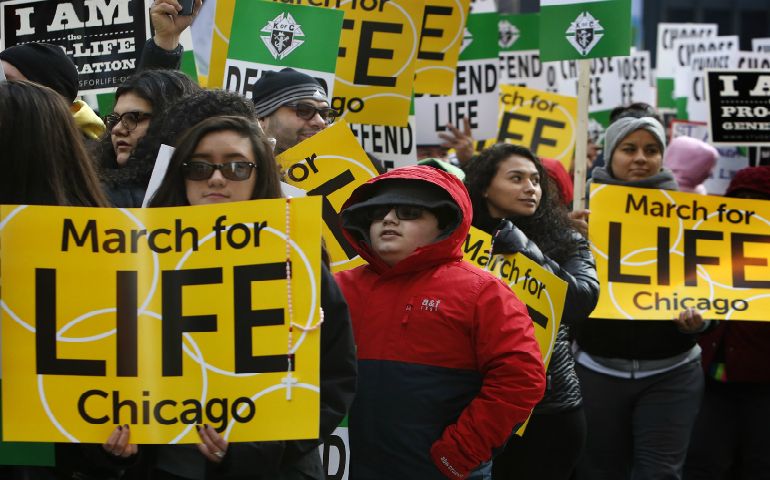 People carry signs as thousands of participants walk in Chicago's March for Life Jan. 15. Cardinal Blase J. Cupich of Chicago joined other pro-life speakers at the event before the march. "We raise our voice this afternoon," he said, "with a message which is simple and direct: 'Life Wins.'" (CNS photo/Karen Callaway, Chicago Catholic)

Washington — U.S. House passage of the No Taxpayer Funding for Abortion Act, making the 41-year-old Hyde Amendment permanent, puts the country "one step closer to getting the federal government out of the business of paying for abortion once and for all," said the president of National Right to Life.

"Over 2 million Americans are alive today because of the Hyde Amendment," said Carol Tobias said in a statement.

By a 238-183 vote Jan. 24, House members passed H.R. 7, the No Taxpayer Funding for Abortion and Abortion Insurance Full Disclosure Act of 2017. It was sponsored by Rep. Chris Smith, R-New Jersey, co-chair of the Congressional Pro-Life Caucus.

A companion bill has been introduced in the Senate by Sen. Roger Wicker, R-Mississippi. President Donald J. Trump indicated before the House vote he would sign the measure if it comes to his desk.

"Two million people who would have been aborted instead survived because public funds were unavailable to effectuate their violent demise, while their mothers benefited from prenatal health care and support," Smith said in a statement. "Two million survivors have had the opportunity to live and enjoy the first and most basic of all human rights — the right to life."

The 2 million figure he and Tobias cited comes from a report issued late last year by the Charlotte Lozier Institute on more than 20 peer-reviewed studies indicating that many lives have been saved since the Hyde Amendment was introduced in 1976.

"As hundreds of thousands of Americans flock to Washington for the March for Life (Jan. 27), we must never forget that defending all of our people — especially the defenseless — must be our top priority if we want to be a good and moral nation," House Speaker Paul Ryan, R-Wisconsin, said in a statement.

H.R. 7, which is identical to bills that passed in 2014 and 2015, make permanent the Hyde Amendment, which prohibits tax dollars from paying for abortion except in cases of rape, incest or threat to the woman's life. The amendment, which covers programs administered by the Department of Health and Human Services, has had to be renewed annually by Congress in its appropriations bill.

"Polling consistently shows that a supermajority of Americans — 61 percent, according to a Marist poll released (Jan. 23) — oppose taxpayer funding of abortion, and eight in 10 Americans think laws can protect both the well-being of a woman and the health of her unborn child," Smith added.

In remarks on the House floor before the vote, Rep. Trent Franks, R-Arizona, told fellow lawmakers: "Although we may not agree on all the vicissitudes of abortion, one thing is certain, some day, we, as a society, will look back and we will recognize the humanity of these little children of God and the inhumanity of what is being done to them and we will regret these days.

"Until then, at least, can't we get together and say that we shouldn't force taxpayers to pay for the killing of innocent, little human beings?" he asked. "I pray that we can open our eyes to see that truth."

According to Smith, the measure also will ensure that the federal Affordable Care Act, "until repeal," conforms with the Hyde Amendment. Until there is a new health care law, he added, the bill also will "ensure full disclosure, transparency and the prominent display of the extent to which any health insurance plan on the exchange funds abortion."

Rep. Diana DeGette, D-Colorado, who is co-chair of the House Pro-Choice Caucus, told Mother Jones the House vote seems "like a slap in the face after we had over a million women marching in Washington and around the country." She was referring to the Woman's March on Washington Jan. 21, which organizers said drew about 500,000 participants.

"House passage of this legislation is the first step toward fulfilling a promise made by President Trump to keep taxpayers out of the abortion business," said Marjorie Dannenfelser, president of the Susan B. Anthony List.

"He and his administration are working for the American people, not the abortion lobby," she added. "We urge the U.S. Senate to follow suite so that this bill can get to President Trump's desk as soon as possible."

Father Frank Pavone, national director of Priests for Life, said it "is time for the Senate to move as quickly as the House to follow the will of the American people, who overwhelmingly do not want to pay for abortions."

In January 2014, when the No Taxpayer Funding for Abortion Act was first introduced, an official with the U.S. bishops' Secretariat of Pro-Life Activities testified on behalf of the bill.

"Even public officials who take a 'pro-choice' stand on abortion have supported bans on public funding as a 'middle ground' on this contentious issue — in recognition of the fact that it is not 'pro-choice' to force others to fund a procedure to which they have fundamental objections," said Richard M. Doerflinger, then associate director of the secretariat.

"And even courts insisting on a constitutional 'right' to abortion have said that this alleged right 'implies no limitation on the authority of a state to make a value judgment favoring childbirth over abortion, and to implement that judgment by the allocation of public funds,'" he said.