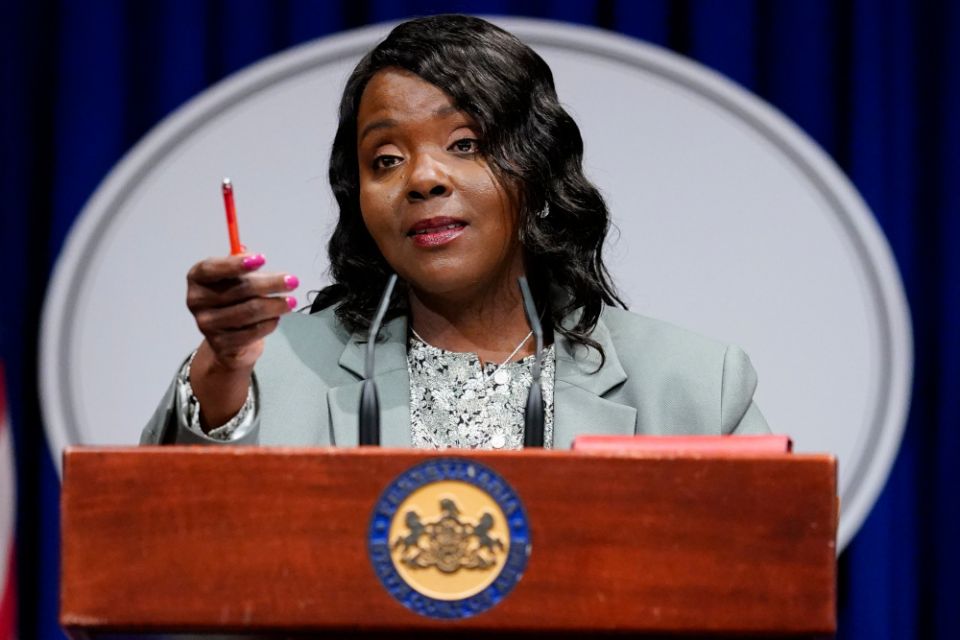 Acting Secretary of State Veronica Degraffenreid speaks with members of the media during a news conference at the Pennsylvania Capitol in Harrisburg, Pa., Wednesday, May 26, 2021. Degraffenreid discussed the results of an internal investigation into a bureaucratic blunder that scuttled a statewide voter referendum on whether to give victims of childhood sexual abuse a fresh opportunity to sue their abusers and complicit institutions. (AP/Matt Rourke)

Harrisburg, Pa. — An internal investigation into an apparent bureaucratic blunder by Gov. Tom Wolf's administration that scuttled a statewide voter referendum sought by victims of childhood sexual abuse found no evidence of a deliberate attempt to derail it.

The Office of Inspector General's report, released May 26, said agents interviewed 22 current and former state employees and reviewed the email accounts of nine state officials for any evidence of outside influence or intentional acts.

Rather, it said, Wolf's Department of State — which oversees elections — had no executive office, bureau or executive staff member responsible for overseeing internal processes for constitutional amendments.

The revelation of the mistake sparked outrage in the community of childhood sexual abuse survivors. They questioned anew on May 26 how it was possible that the Department of State had successfully advertised every other proposed constitutional amendment.

The Department of State's liaison to the Legislature resigned on May 21, but agency officials would not say whether it was related.

The referendum was to be on whether to give victims of childhood sexual abuse a fresh opportunity to sue their abusers and complicit institutions, a proposal propelled by investigations into Pennsylvania's Roman Catholic dioceses.

The referendum had been on track for last week's primary election until Wolf's administration revealed in February that it hadn't advertised the proposal in newspapers across Pennsylvania, as is constitutionally required.

A referendum may now have to wait until 2023.