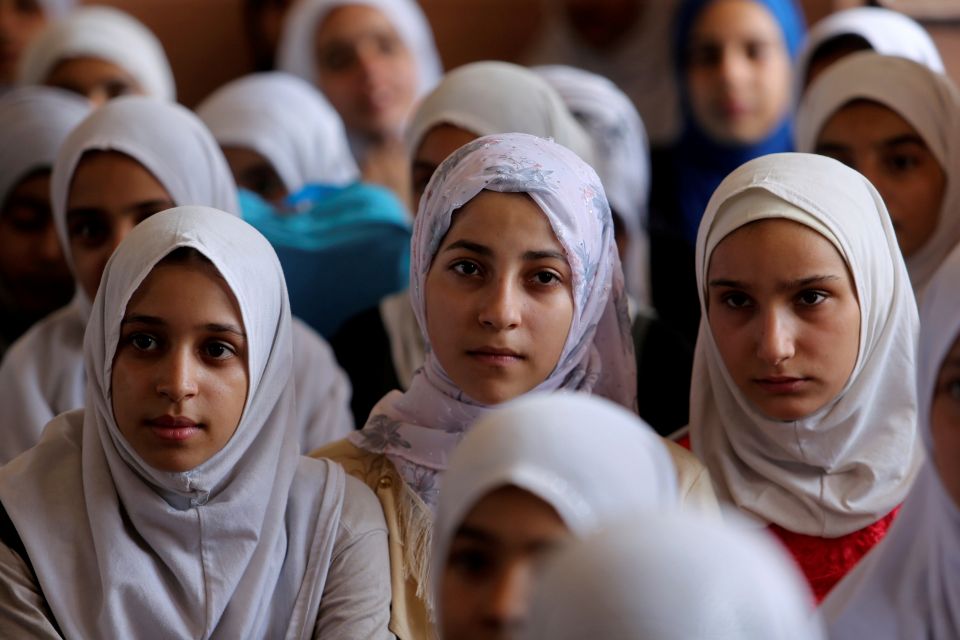 Iraqi girls attend school in Mosul, Iraq, July 18. A House subcommittee hearing on a U.S. law to improve U.S. religious freedom diplomacy efforts globally prompted a discussion on how to expand those freedoms for religious minorities, particularly for those in Muslim-majority countries. (CNS/Reuters/Ari Jalal)

Washington — A House subcommittee hearing on a U.S. law to improve U.S. religious freedom diplomacy efforts globally prompted a discussion on how to expand those freedoms for religious minorities, particularly for those in Muslim-majority countries.

The Frank R. Wolf International Religious Freedom Act was signed into law a year ago by President Barack Obama to give "tools and resources to our State Department to integrate religious freedom into our diplomacy the world over in order to counter violent extremism broad," said Rep. Chris Smith, R-New Jersey, chair of the House Subcommittee on Africa, Global Health, Global Human Rights and International Organizations, at the Dec. 6 hearing.

The law's features include designating non-state groups such as Islamic State as "violent non-state actors," making it easier to impose financial sanctions. It also creates a "designated persons list" of violators, sets up a database of those detained, imprisoned and tortured for their faith, and requires that foreign service officers undergo training in religious liberty "so that they are able to integrate this important tool into their daily work," Smith said.

It was a bipartisan measure written by Smith and co-sponsored by Rep. Anna Eshoo, D-California and named for former Congressman Frank Wolf, "a tireless champion for the rights of the poor and the persecuted globally." The advancement of fundamental human rights -- in particular, freedom of religion -- "should be a core objective of U.S. foreign policy," Smith said.

The 2016 law expanded the International Religious Freedom Act of 1998, which was passed to promote religious freedom as a foreign policy of the United States. The year-old law gave the U.S. State Department new tools, resources and training to counter extremism and combat a worldwide escalation of persecution of religious minorities.

U.S. action on human rights violations elsewhere has "entailed rhetorical condemnation of persecutors through annual reports and lists of particularly severe violators," said Thomas Farr, director of the Religious Freedom Research Project at Georgetown University, one of the panelists who testified at the two-hour hearing.

Rare punitive actions were "reactive and ultimately ineffective," he added. "Our foreign policy and national security leadership should, on the basis of the evidence, make a conscious decision to integrate religious freedom into our national security strategy, and to generate far more diplomatic energy and resources than currently is the case."

"Freedom of religion or belief is unfortunately an unrealized ideal in too many parts of the world," said Sayyid Syeed, senior adviser in the Office of Interfaith and Community Alliances at the Islamic Society of North America.

Syeed lauded the U.S. Conference of Catholic Bishops and other religious organizations that joined in 2010 to establish the "Shoulder to Shoulder" campaign to stand in solidarity with U.S. Muslims after a Florida pastor threatened to burn the Quran.

He also named Catholic Relief Services, the U.S. bishops' overseas relief and development agency, for its efforts to "solve problems and bring relief" with Islamic Relief USA and similar organizations sponsored by other churches. "When we work together, across all faiths, America is stronger," he said.

Neil Hicks, director of human rights promotion for the group Human Rights First, suggested that governments foster terrorism within their own borders. "When governments stifle peaceful dissent, muzzle the media and prevent the legitimate activities of nonviolent civil society organizations, they are not countering extremism," he said, "they are fomenting it."

Hicks added, "Regrettably, in U.S. foreign policy a short-term interest in cooperation with authoritarian governments has too often prevailed over the long-term imperative to end the oppressive governance that has been a major driver of violent extremism."

His comments drew a rebuke from Rep. Dana Rohrabacher, R-California, a subcommittee member. Citing the current Egyptian government of President Abdel-Fattah el-Sissi as an example, "we should not try to nitpick them so they fall to radical Islamist regimes," he said. "They're not perfect. Well, neither are we."

Hicks replied there have been "thousands of deaths" since el-Sissi won the presidency in 2014. "That is not nitpicking. That is escalation."

Just this past April, a pair of terrorist attacks were carried out at two Egyptian churches. The Islamic State group claimed credit for the attacks, which killed at least 45 people and injured more than 100 others.

Panelist John Lenczowski, founder and president of the Institute of World Politics, likened the challenge posed by Muslim-majority nations to those under communism, requiring "soft power" responses such as information, ideology, cultural diplomacy, counter-propaganda and increased capacity for strategic communications.

"A war of information" should be the United States' next move, he noted, and one target audience should be women, who, according to Lenczowski, suffer greatly under Islam.

"The United States has spent trillions of dollars mostly fighting two wars to destroy terrorism-supporting regimes, seeking out terrorists and killing them. In doing so we have treated terrorism as principally a military and intelligence problem with little reference to what inspires it in the first place," Lenczowski said.

Rep. Karen Bass, D-California, the subcommittee's ranking minority member, told Lenczowski: "We made some pretty bad decisions while we were fighting communism (in Africa). We supported apartheid, we supported colonial powers."

She noted the 2016 Wolf religious freedom law's provision on training foreign service officers in religious-freedom issues could go for naught given there has been an accelerated departure of these officers, even though the Senate rejected a proposed State Department budget cut of up to 30 percent for the current fiscal year.

Bass added that religious freedom is in the eye of the beholder, as both some candidates for political office and members of Congress have declared that Muslims do not belong in Congress and that they should not take the oath of office with their hand on a Quran instead of a Bible.

Syeed, in his remarks, noted how the prophet Muhammad, the founder of Islam, had been subjected to religious persecution himself and sought to bring differing faith groups together. The Quran, he added, has several passages devoted to religious tolerance.

But "we had Crusades for several hundred years," Syeed said, with Christians waging war against Muslims; against that backdrop, converting from Islam to another belief "wasn't (just) changing of faith, it was changing of mind." Since then, he added, "in every Muslim country, that is why a change of religion cannot be tolerated."