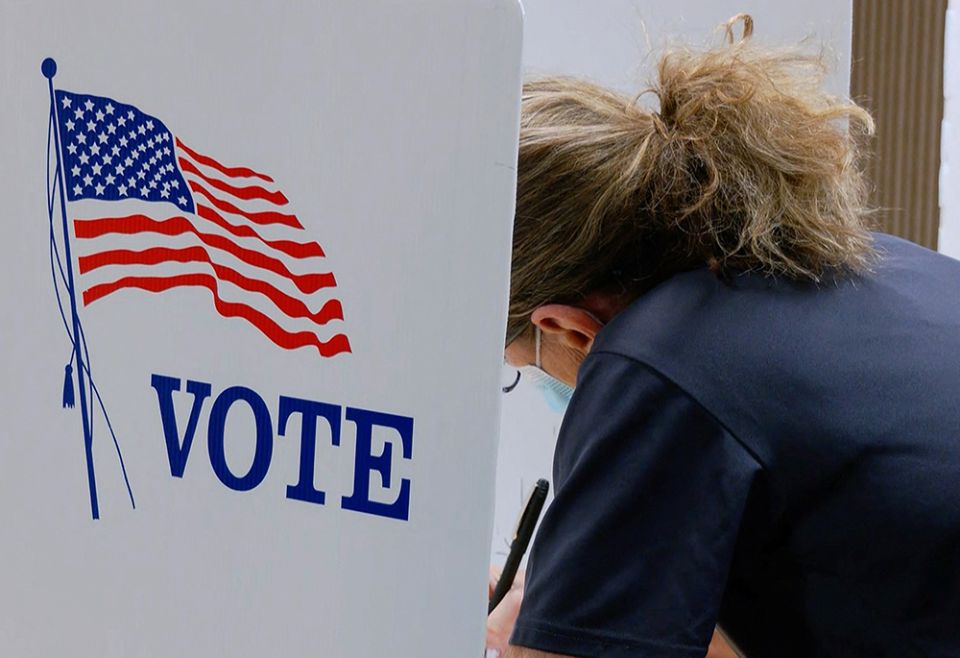 A voter marks a ballot during the primary election and abortion referendum at a Wyandotte County polling station Aug. 2 in Kansas City, Kansas. Voters rejected a ballot referendum that would have added language to the state constitution to say there is no constitutional right to abortion in Kansas. (CNS/Reuters/Eric Cox)

We are now less than two months from the midterm elections. At the beginning of the summer, as gas prices skyrocketed and President Joe Biden's approval rating dropped to a low of 38%, Democrats feared they were going to get clobbered. Historically, the party that controls the White House loses seats in the midterm elections and this year looked to be no exception.

Then, the Supreme Court overturned Roe v. Wade, energizing a part of the Democratic Party base. The Democrats overperformed in several special elections. I filled my gas tank for less than $60 the other day for the first time in months. Republicans nominated some extreme candidates and others who were just lousy. Democrats' prospects appeared to improve, even if the chances of them holding on to both chambers were exceedingly dim.

Now, The New York Times' polling genius Nate Cohn has started to zero in on the midterm polling and he is flashing a big yellow caution light to Democrats. Cohn starts his analysis by recalling the way he and his team calculated the 2020 polling data, and the fact that they created a chart that took 2020 polling data and then asked: What would the numbers be if they were as wrong as the 2016 polling numbers had been? "Early in the 2020 cycle, we noticed that Joe Biden seemed to be outperforming Mrs. [Hillary] Clinton in the same places where the polls overestimated her four years earlier," he writes.

You will recall that almost no one predicted Clinton would lose to Donald Trump in 2016. The pollsters badly misjudged the race in several key states. Applying the margin by which they got it wrong in 2016 to the numbers coming in in 2020, Cohn said the revised numbers proved "eerily prescient."

For example, in Wisconsin in 2020, the polls had Biden winning by 10 points. When Cohn factored in the degree to which the polls for the Badger State had been wrong in 2016, Biden's lead dropped to 4 points. Biden ended up winning by less than one percentage point. 2020 polls had Biden up by 2 points in Florida, factoring in the 2016 mistakes dropped that lead to less than one point, and Trump ended up winning the state by 3 points.

In short, pollsters continued to undercount support for Trump. Why? Pollsters have to create a model of the electorate: Whom do they think will turn out and vote? Trump had the ability to get people who felt alienated from the system and had not cared to vote previously to turn out for him. On Election Day in 2016, friends on the Clinton campaign told me that their field staff reported meeting their targets. The problem was that those targets, like the polls, failed to predict that Trump could get so many people who had not voted in years to turn out for him.

According to Cohn, the worry with polls this year is that "Democratic Senate candidates are outrunning expectations in the same places where the polls overestimated Mr. Biden in 2020 and Mrs. Clinton in 2016." On the other hand, in some states like Georgia, where the polling was accurate in 2020, the Democratic candidates are lagging, that is to say, they are predicting this will be a typical midterm election in which the Democrats will lose.

There is something scandalous in the middle of this story. Cohn writes, "Most pollsters haven't made significant methodological changes since the last election. The major polling community post-mortem declared that it was 'impossible' to definitively ascertain what went wrong in the 2020 election." Can you imagine if NASA had adopted this attitude after the Challenger space shuttle exploded? Or the Pentagon had taken such a stance after the Vietnam War?

Polls are, at best, a snapshot in time, and time marches on. Events, some unplanned, will continue to shape not only the mood of the electorate, but the shape of it. People who are angry tend to show and vote in midterms, which is why the party out of power usually does well in a midterm, but the whole country seems to have something to be angry about these days.

Candidates are mostly just beginning to launch their ad campaigns and the negativity of those ads usually works, especially if the electorate is in a foul mood.

The good news from the front in Ukraine might cause Russia to cut off more oil and gas supplies, just as Europe heads into winter. That could cause gas prices to rise again, hurting Democrats' chances.

The backlash against the Supreme Court abortion decision seems to have taken Republicans by surprise and some candidates, like Blake Masters in Arizona, are moderating their positions as fast as they can. Will that really attract moderates or just turn off the GOP base which remains resolutely pro-life?

In the weeks ahead, I will be following the polls to be sure. They are to politics what cotton candy is to the state fair; you just can't pass it by. But Cohn's caution should be heeded by Democrats. Polling is an inexact science and always was. This much is clear: A lot of races are close and the stakes, especially for control of the machinery of elections, could scarcely be higher.

Politics | The stakes for the midterm elections could scarcely be higher