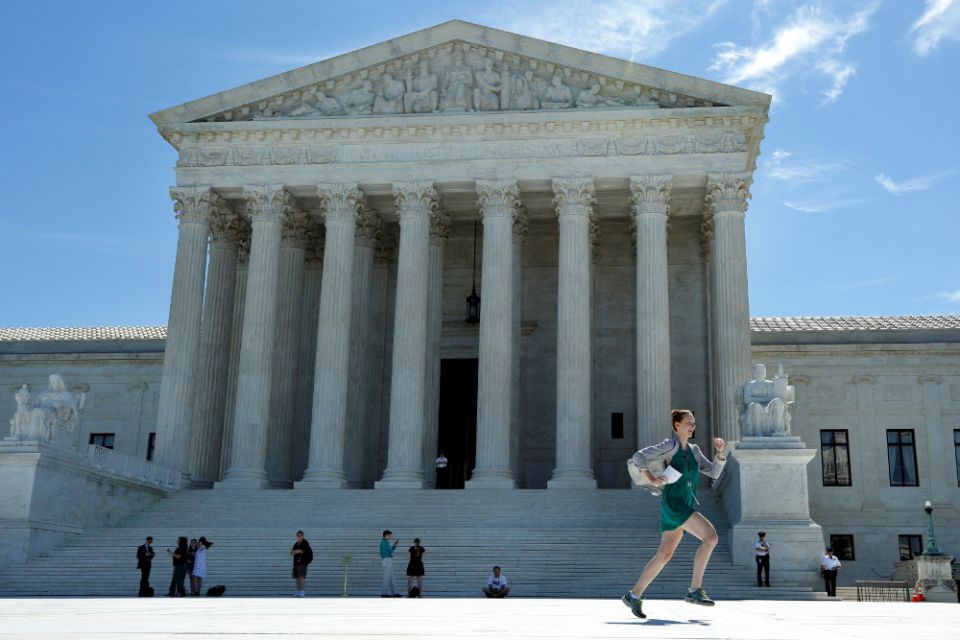 A news assistant runs past the U.S. Supreme Court in Washington after the justices announced they would hear President Donald Trump's travel ban case in October. Now that the Trump administration has announced a revised version of the travel prohibitions, the hearing has been cancelled. (CNS/Yuri Gripas, Reuters)

Washington — The U.S. Supreme Court Sept. 25 canceled an upcoming hearing on the constitutionality of President Donald Trump's travel ban after government officials unveiled the night before a new expanded version of the travel prohibitions.

The high court was set to hear arguments Oct. 10, but said in a statement that "the cases are removed from the oral argument calendar, pending further order of the court."

Hours before part of a version of the Trump administration's travel ban of six majority-Muslim countries was set to expire, officials rolled out the new version late Sept. 24. The new ban now includes travel prohibitions for some Venezuelan government officials and their immediate family, as well as nationals from North Korea and the Central African country of Chad. Officials say the new restrictions go into place Oct. 18.

With the addition of North Korea and Venezuela, some say the administration is hoping to avoid previous charges that it is targeting Muslims from entering the country, which the president had told his supporters he would do while campaigning.

"The fact that Trump has added North Korea — with few visitors to the U.S. — and a few government officials from Venezuela doesn't obfuscate the real fact that the administration's order is still a Muslim ban," said Anthony Romero, executive director of the American Civil Liberties Union in a Sept. 24 statement.

The ACLU, along with other organizations, were to participate in the legal challenge against the ban when the court reconvenes in October but instead the justices have asked all parties for briefs addressing "whether, or to what extent" the new prohibitions may render the case moot and to do so by Oct. 5.

A friend of the court brief filed on behalf of the U.S. Conference of Catholic Bishops in mid-September said the travel ban was "cruel and inhumane treatment" and that "denying refugee children life-saving entry to the United States based on an executive order clearly motivated by anti-religious bias, is both un-Catholic and un-American."

It continued: "Such blatant religious discrimination is repugnant to the Catholic faith, core American values and the United States Constitution."

Trump administration officials told reporters from various news organizations that "the restrictions either previously or now were never, ever, ever based on race, religion or creed,'' shortly after the latest version of the ban was rolled out. They said the governments of the countries listed were "simply not compliant with our basic security requirements."

The original ban sought travel restrictions from nationals trying to enter the U.S. from Iraq, Iran, Libya, Somalia, Sudan, Syria and Yemen. Sudan is no longer included in the new list of countries, and Iraq was dropped during the second incarnation of the ban. The old travel ban barred individuals from the listed countries from entering the U.S. for 90 days, put a stop for 120 days to the refugee resettlement program while also barring Syrians from entering indefinitely.

The first ban, as well as its revision, faced legal challenges and it's expected the latest restrictions will, too. In September, the high court announced a temporary order that kept refugees from entering the U.S. as the justices prepared for the Oct. 10 hearing.

The latest ban permanently restricts travel from the listed countries but there are some exceptions depending on the country or the type of visa a person requests. For example, while Iran remains on the list of countries with travel restrictions, student and exchange visas are an exception. And while Venezuela is on the list, the restrictions seem to affect a small group.

Trump administration officials say the restrictions are necessary because the nations on the list have either refused to share information with the U.S. government or have not taken necessary security precautions. Officials said, however, that they can be taken off the list if they meet certain conditions.

The Department of Homeland Security said on its website that the latest restrictions announced by the president "will protect Americans and allow DHS to better keep terrorists and criminals from entering our country. The restrictions announced are tough and tailored, and they send a message to foreign governments that they must work with us to enhance security."