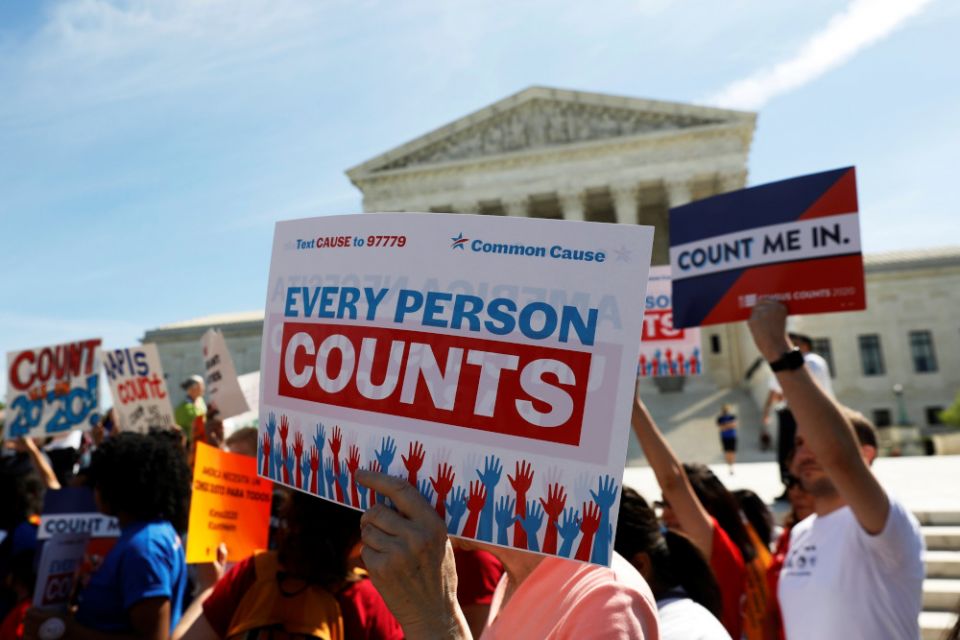 Demonstrators gather outside the U.S. Supreme Court in Washington April 23, 2019, following oral arguments in an earlier case on a citizenship question for the 2020 census. In a 6-3 vote, the Supreme Court Dec. 18, 2020, did not give a definitive ruling on President Donald Trump's order to exclude unauthorized immigrants from the 2020 census for redrawing congressional districts, saying it was too early to do so. (CNS/Reuters/Shannon Stapleton)

Washington — In a 6-3 vote, the Supreme Court Dec. 18 did not give a definitive ruling on President Donald Trump's order to exclude unauthorized immigrants from the 2020 census for redrawing congressional districts, saying it was too early to do so.

In an unsigned ruling, the court said the case was "riddled with contingencies and speculation that impede judicial review."

The decision does not close the door on Trump's order but simply stressed that the time was not right to make a conclusive response about it. "Consistent with our determination that standing has not been shown and that the case is not ripe, we express no view on the merits of the constitutional and related statutory claims presented. We hold only that they are not suitable for adjudication at this time," the justices said.

The case, Trump v. New York, was argued before the Supreme Court Nov. 30 and put on a fast track for a quick resolution.

The dissent, written by Justice Stephen Breyer and joined by Justices Elena Kagan and Sonia Sotomayor, stressed that it actually was the right time for the court to be more definitive.

Breyer said the government's effort to remove unauthorized immigrants "from the apportionment base is unlawful, and I believe this court should say so."

Some are saying the court's decision will not make a significant impact because leaked documents from the Census Bureau have indicated that the apportionment numbers will not be available until after Jan. 20, the day of President-elect Joe Biden's inauguration. Biden has already mentioned he would reverse Trump's census order.

On the day of oral arguments in this case, Auxiliary Bishop Mario E. Dorsonville of Washington, chairman of the U.S. Conference of Catholic Bishops' Committee on Migration, said: "Denying the undocumented and the states in which they reside their rightful representation in Congress is counter to the Constitution and makes people feel invisible and not valued as human beings."

"The church's teaching is clear: Human dignity is most sacred, regardless of legal status," he said in a statement. "For that reason, we once again affirm the need to count all persons in the census, as well as in the apportionment of congressional representatives." 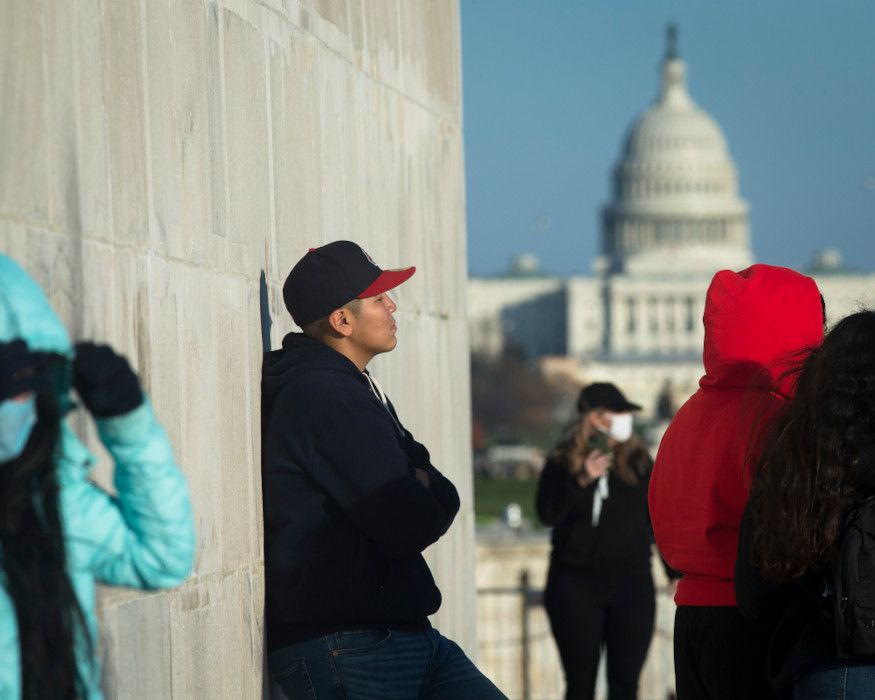 People are seen at the Washington Monument in Washington Nov. 28, 2020. The U.S. Supreme Court Nov. 30 heard oral arguments in a case brought by the Trump administration to exclude from the census those in the U.S. without legal documentation. (CNS/Tyler Orsburn)

The bishops' conference, along with other Catholic organizations, filed a friend-of-the-court brief in this case, arguing that excluding those without legal documentation from the apportionment base of the census sends a message these individuals are not equal members of the human family, which contradicts the dignity of all people and violates the U.S. Constitution and the Census Act.

New York challenged Trump's census order along with several other states, cities, counties and immigrant activist groups stressing the administration's action could leave several million people uncounted and could cause Texas, California and New Jersey to lose seats in the House of Representatives. The number of House seats accorded to the states is based on state population numbers.

Since the census started in 1790, its practice has been to count all people living in the United States. Currently, an estimated 11 million unauthorized immigrants are living in this country.

Last year, the Supreme Court ruled 5-4 against Trump's effort to add a citizenship question to the census. Critics said the question was intended to frighten immigrants from taking part in the population count and artificially reduce population numbers in heavily Democratic areas to the benefit of Republicans.

After Trump issued his order on excluding unauthorized immigrants, the chairmen of two USCCB committees described the action as "simply wrong and divisive." They urged him to rescind it and make "efforts to protect and heal our nation and all who are living in our country."

"This is nothing but an unconstitutional and xenophobic attempt to weaponize the census to silence and scare immigrants. The immigrant community will not be silenced," Cabrini Immigrant Services of New York City tweeted this summer.

Trump's memo said excluding "illegal aliens" from the 2020 census "reflects a better understanding of the Constitution and is consistent with the principles of our representative democracy."

"My administration will not support giving congressional representation to aliens who enter or remain in the country unlawfully, because doing so would create perverse incentives and undermine our system of government," the memo added.