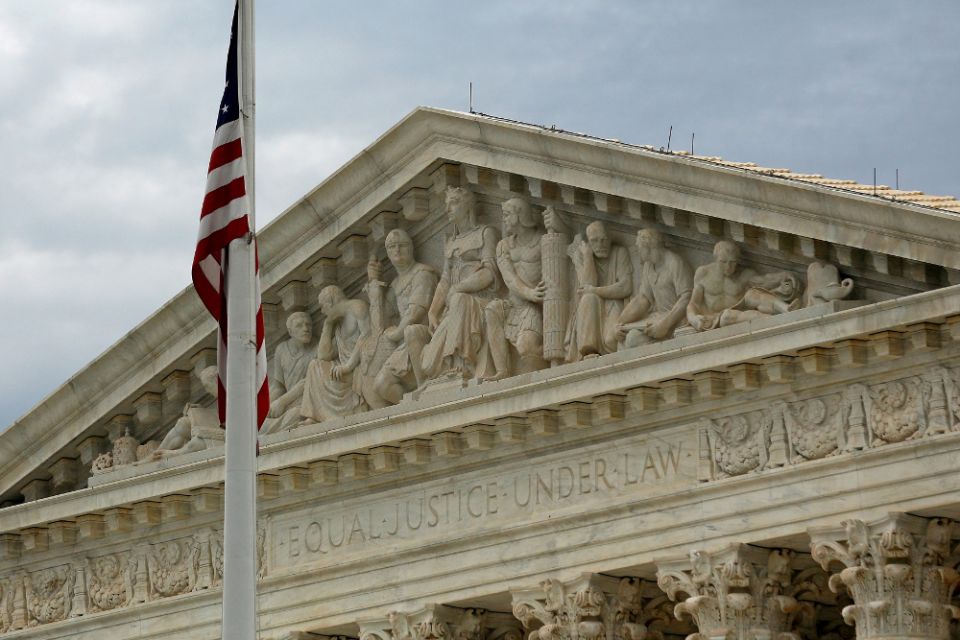 A view of the U.S. Supreme Court building in Washington is seen in this 2015 file photo. (CNS/Jonathan Ernst, Reuters)

Washington — The U.S. Supreme Court ruled Feb. 27 that some immigrants detained by the government can be held indefinitely.

In the 5-3 ruling, with Justice Elena Kagan recusing herself, the court reversed a lower court ruling that required periodic bond hearings for immigrants held in custody with U.S. immigration officials. In 2016, the court looked at this same case and was deadlocked 4-4 in its decision when it had only eight justices on the bench.

The case reviews the San Francisco-based U.S. Court of Appeals for the 9th Circuit's decision that detained immigrants had a right to bond hearings, as long as they weren't considered a flight risk or a danger to national security, and that they should be entitled to such hearings every six months.

The Supreme Court's current decision sends the case back to the appeals court to determine if it should continue as a class-action lawsuit or if provisions of the immigration law violate the Constitution.

At issue is a lawsuit filed by immigrants in custody including some who face deportation for crimes and others who came to the U.S. seeking asylum. The lead plaintiff, Alejandro Rodriguez, is a Mexican immigrant who was detained for more than three years without a bond hearing while he fought deportation after being convicted of misdemeanor drug possession and joyriding.

Justice Samuel Alito, who wrote the majority opinion, said periodic bond hearings are not required by immigration law, and he noted that the reason immigrants are detained is to determine if they can be "lawfully present in the country."

The dissent was written by Justice Stephen Breyer, joined by Justices Sonia Sotomayor and Ruth Bader Ginsburg. Breyer, reading a summary of his dissent from the bench said: "The many thousands of individuals involved in this case are persons who believe they have a right to enter into or remain in the United States, and a sizable number turn out to be right."

He added that the government holds these people "confined in jails or prisons for months, sometimes for years, until the matter can be resolved. And they spend those months or years imprisoned without bail."

Kagan recused herself because of a conflict. "While serving as solicitor general, she authorized the filing of a pleading in an earlier phase" of the case, according to the clerk of the high court.

Postville faith leaders, immigrants look back on 10 years since raid

Antonin Scalia and the future of the court

The left's fetish for a pristine past is misguided