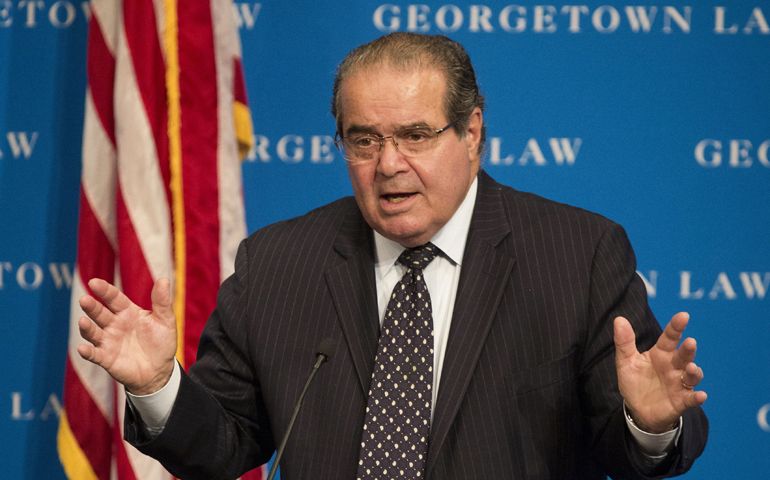 The U.S. Supreme Court not only tackled a number of issues this year including immigration, abortion, the contraceptive mandate of the Affordable Care Act and the death penalty, but the justices weighed in on those cases with one less vote after Justice Antonin Scalia's death in February.

Scalia, who had been one of six Catholic members of the court, was often described as its most conservative voice and known for his strict interpretation of the Constitution's intent. His death left a void that led to some predicted 4-4 decisions and an opening for an appointment to the bench by President-elect Donald Trump.

On the campaign trail, Trump promised to pick a conservative justice and he issued a list of 21 potential nominees not only to replace Scalia but to fill any other seats that become vacant.

A month after Scalia's death, President Barack Obama announced Judge Merrick Garland as his Supreme Court nominee, but Senate Republicans vowed not to give Garland, who is chief judge of the U.S. Court of Appeals for the District of Columbia Circuit, or any nominee a hearing until the next president takes office.

As the court wrapped up its term this summer and prepared for the new term this fall, legal experts continually noted that the absence of the ninth justice left the court at a loss.

The court is in "unchartered territory," said Kristen Clarke, president of Lawyers' Committee for Civil Rights Under Law, during an overview of the new term where she noted that the longtime absence of a justice has not happened in more than five decades.

"I'm concerned about the integrity of the Supreme Court," she said, noting that it is in a "state of paralysis" without the ninth vote.

But the court continued its work all the same. The last term, which ended in late June, wrapped up with a number of high-profile cases Catholics were watching and only one, the Texas abortion case, was decided definitively with a 5-3 vote.

In that case, the justices struck down restrictions on Texas abortion clinics that required them to comply with standards of ambulatory surgical centers and required their doctors to have admitting privileges at local hospitals. Opponents of the law claimed the requirements were aimed at closing abortion clinics. But the state and many pro-life advocates maintained that the law protected women's health.

The court issued a tie vote in its June 23 immigration decision, which blocked the Obama administration’s plan to temporarily protect more than 4 million unauthorized immigrants from deportation. The court's 4-4 vote left in place a lower court injunction blocking the administration's immigration policy with a one-page opinion stating: "The judgment is affirmed by an equally divided court."

Legal experts called the ruling an ambiguous and confusing political and legal decision that left many in a state of limbo. It also put attention on the vacant Supreme Court seat that could determine how the case is decided in an appeal. Religious leaders were quick to denounce the court's action as a setback for immigrant families and stressed the urgency of comprehensive immigration reform.

Another big case before the court that drew reaction from both sides was the challenge to the Affordable Care Act's requirement that employers cover contraceptives in their employee health plans even if they are morally opposed to such coverage.

The Little Sisters of the Poor was just one of several Catholic groups involved in the case, but the religious order became synonymous with the Zubik v. Burwell case. Other plaintiffs include Priests for Life, the Pennsylvania dioceses of Pittsburgh and Erie, the Archdiocese of Washington and other religious employers who do not fit the government’s narrow exemption to the contraceptive mandate given to churches.

In mid-May, the Supreme Court sent these cases back to the lower courts. This action cleared the slate from previous court rulings when five appeals courts had ruled in favor of the contraceptive mandate and one ruled against it.

Related: "Supreme Court order sends contraception case back to lower courts in search of compromise" (May 16, 2016)

The justices expressed hope that both sides might be able to work out a compromise, which hasn't happened. With the cases now back at the federal appeals court level — in eight separate courts — lawyers for both sides have applied for extended deadlines to negotiate a compromise. Both sides also are waiting to see what happens with the regulations with a new White House administration.

In the court's new term, which began Oct. 3, the justices heard oral arguments in two death penalty cases from Texas: One involves potential racial bias that may have swayed the jury to impose the death penalty and the other examining standards used in evaluating mental abilities determining if someone can be executed.

The court will take up one religious liberty case this term about a church being excluded from a state’s grant program. The case, which hasn't been given a date yet for oral arguments, is Trinity Lutheran Church of Columbia v. Pauley, about a religious preschool that was rejected from a Missouri program that provides reimbursement grants for the purchase of tire scraps used at the base of playgrounds.

At a Supreme Court briefing, a legal expert said the case raises religious liberty questions but is "less contentious" than the challenge to the Affordable Care Act's contraceptive requirement for employers.

Bishop warns against 'weaponization of Eucharist' with elected officials