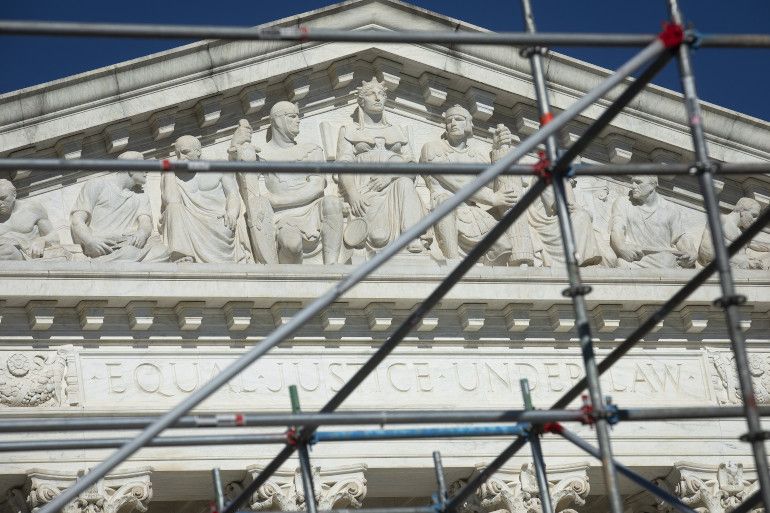 Washington — The day after issuing its final opinions for the current term, the Supreme Court announced it was taking up one religious rights case and rejecting another for its next term.

Both cases sound somewhat familiar based on previous court rulings.

One of the 10 new cases the court announced July 2 that it will hear concerns parents in Maine who want to use a state tuition program to send their children to religious schools.

The case the justices are not taking -- a case that already had court watchers' attention -- is a challenge to Washington state's anti-discrimination law from a florist who refused to make an arrangement for a same-sex wedding.

The Maine school case, Carson v. Makin, challenges a state education department rule that allows families who live in towns without public schools to receive public tuition funds to send their children to another public or private school, but it excludes religious schools.

Two sets of parents who were prevented from using state funds to send their children to Christian schools in the state took their case to federal court arguing the program violated their constitutional rights.

The U.S. Court of Appeals for the 1st Circuit upheld the program, saying religious schools were excluded because funds could go toward religious instruction.

In a similar case last year, the Supreme Court ruled in Espinoza v. Montana Department of Revenue that states are not required to subsidize private education, but they can't exclude religious schools from receiving tuition funding simply because they are religious.

The U.S. Conference of Catholic Bishops praised the Espinoza decision, which they said "means that religious persons and organizations can, like everyone else, participate in government programs that are open to all."

The Maine case, to be argued in the fall, looks at an issue that wasn't resolved in the Espinoza case: Does a state violate the Constitution with a program that provides students with money to attend private schools but bars them from attending schools that provide religious instruction?

John Bursch, senior counsel for Alliance Defending Freedom, was pleased the court was taking this case. "The government cannot discriminate against people of faith who wish to act consistently with that faith in all areas of their lives," he said in a July 2 statement.

He hopes the court will build on its previous decisions in the Espinoza case and in the 2017 Trinity Lutheran case about funding for playground resurfacing where the court said governments can't discriminate against churches that qualify for funding.

Those decisions, he said, "made clear that states can't oust parents and children from a generally available benefit program simply because they choose a religious private school."

Aaron Frey, Maine's Democratic attorney general, defended the current program saying religious schools have been excluded from the public tuition dollars "because the education they provide is not equivalent to" public schools.

"Parents are free to send their children to such schools if they choose, but not with public dollars," he said in a statement reported by The Associated Press.

"I am confident that the Supreme Court will recognize that that nothing in the Constitution requires Maine to include religious schools in its public education system," he added.

On the same day the nation's high court said it was taking the school case, it announced, without comment, that it would not be taking up the case of the wedding florist.

Only Justices Clarence Thomas, Samuel Alito and Neil Gorsuch said they would have taken the case, leaving the court one vote short of the number it needs to proceed.

By not taking it, the court leaves in place a ruling against the florist found to be in violation of Washington's anti-discrimination laws by the state's Supreme Court for her refusal to make a floral arrangement for a same-sex couple's wedding in 2013. She said making the arrangement for the couple would go against her religious beliefs about marriage.

The florist case has echoes of the Supreme Court's 2018 Masterpiece Cakeshop decision where it issued a narrow ruling in favor of the Colorado baker who refused to make a cake for a same-sex wedding that he said would violate his religious beliefs.

The florist case, which had come before the Supreme Court before, was sent back to the state courts for another review after the Masterpiece decision.

In 2019, the state court again ruled against the florist, saying she did not have a constitutional right to discriminate and that religious bias did not play a part in this decision.

The case before the U.S. Supreme Court would have examined a question the Masterpiece case did not answer: Does the state violate an artist's First Amendment rights by requiring custom art to be created for same-sex weddings?

After oral arguments in the Colorado baker case, the chairmen of three USCCB committees said they hoped the court would "preserve the ability of people to live out their faith in daily life, regardless of their occupation," noting that artists "deserve to have the freedom to express ideas -- or to decline to create certain messages -- in accordance with their deeply held beliefs."

Lessons and depression from the primary elections