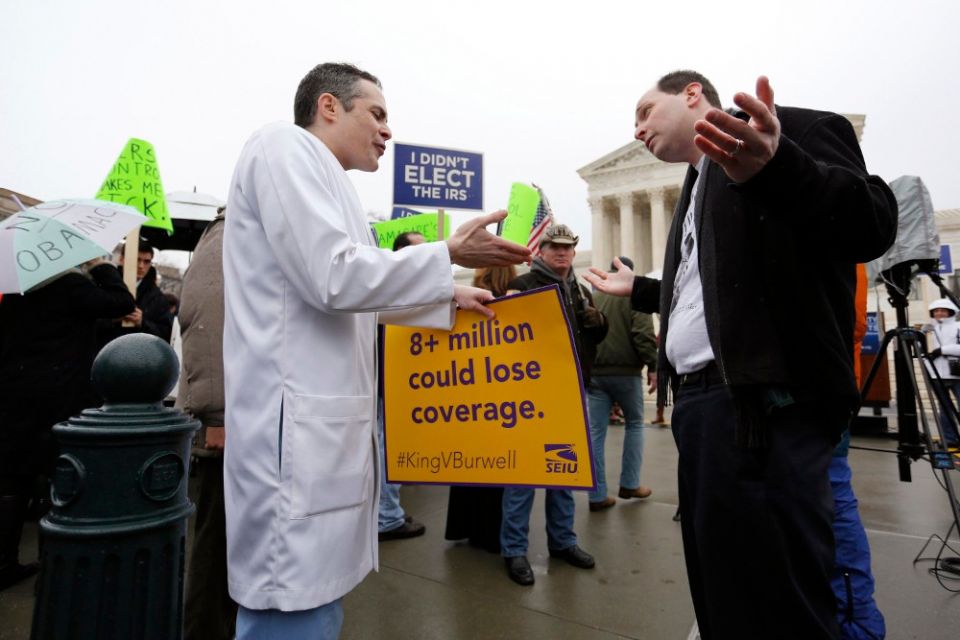 Dr. Devon Fagel, a physician and cancer survivor, argues in favor of the Affordable Care Act with Phil Kerpen, who was part of a Tea Party Patriots demonstration against the health care law March 4, 2015, outside the U.S. Supreme Court building in Washington. The Supreme Court begins hearing cases for the new term Oct. 5, 2020, with the ACA once again before the justices. (CNS/Reuters/Jonathan Ernst)

Washington — Although the Supreme Court began its new term Oct. 5, it is hardly business as usual since the court only has eight members on the bench and it is continuing to hear oral arguments by teleconference due to heath concerns.

The nation's high court moves right into action though with two high profile cases in November: a religious freedom exception to anti-discrimination laws and a review, for the third time, of the Affordable Care Act, the nation's health care law.

The court also could be called upon to decide election disputes if the presidential race is close.

And hovering over all of its current work is the ongoing Senate preparation to move forward with President Donald Trump's nomination of federal appeals court Judge Amy Coney Barrett to succeed Justice Ruth Bader Ginsburg, who died Sept. 18.

Cases not on the docket this term also have the court's attention. For example, the court has been asked by the Trump administration and several states to issue an emergency stay of a federal district court ruling this summer that suspended the in-person requirement during the pandemic for women who want to receive the abortion-inducing drug, mifepristone.

And the court also has gained some notice for what it isn't taking up.

On the first day of its new term, the justices declined to take a case from Kim Davis, the former Kentucky clerk who refused to issue marriage licenses for same-sex couples. The court's decision lets the lower court ruling stand, allowing a lawsuit filed against her to proceed.

Justice Clarence Thomas, joined by Justice Samuel Alito, agreed with the court's decision but also showed displeasure saying: "Davis may have been one of the first victims of this court's cavalier treatment of religion in its Obergefell decision, but she will not be the last." Obergefell was the court's 2015 decision that struck down state bans on same-sex marriage.

Back to the court's fall schedule, on Nov. 4, it will hear oral arguments in Fulton v. Philadelphia, a religious freedom case that centers on a Catholic social services agency that had been excluded from Philadelphia's foster care program for not accepting same-sex couples as foster parents.

The U.S. Conference of Catholic Bishops, the Pennsylvania Catholic Conference and a few Catholic Charities agencies joined more than 30 other religious groups, states and a group of Congress members filed amicus briefs urging the court to protect the faith-based foster care program under its First Amendment religious exercise rights.

At a September webinar sponsored by Georgetown University's law school, Paul Clementi, a partner at the Washington law firm of Kirkland & Ellis, who was solicitor general of the United States from 2005 to 2008, said the court has a lot of "off ramps" with this case, allowing it to address parts of the issue. 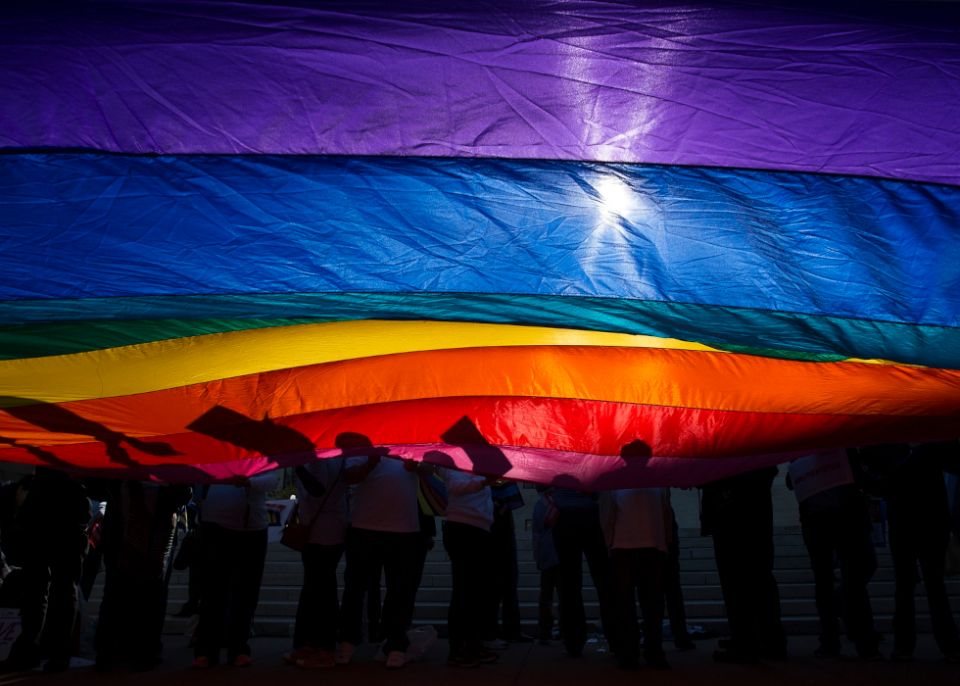 In this 2015 file photo, LGBTQ supporters wave a flag outside the U.S. Supreme Court in Washington. In its upcoming term, the court will be hearing the case of a Catholic social services agency in Philadelphia that had excluded LGBTQ couples as foster parents. (CNS/Tyler Orsburn)

He pointed out that Catholic Social Services of the Philadelphia Archdiocese was not seeking damages but simply wanted to take part in the program on its own terms. He also said the court may find a way for Philadelphia to give the faith-based agency an exemption to the anti-discrimination law.

A decision that looms over the court here is the 1990 Employment Division v Smith decision, which involved two American Indians denied unemployment benefits in Oregon after they were fired for using peyote, a hallucinogenic drug, in a religious ceremony.

Clementi said he would be shocked if the Smith decision would be overruled in this case.

In its petition, Catholic Social Services urged the court to overturn Smith, saying that even though the agency's program should be allowed under that ruling, the decision "has confused rather than clarified the law and should be reconsidered."

Six days after the foster parent case, the court will hear oral arguments challenging the nation's health care law in a case brought by 18 Republican state attorneys general and supported by the Trump administration.

The ACA, which became law in 2010 and was fully implemented in 2015, has been before the nation's high court twice before, in 2012 and 2015, and survived, but this time its fate is more uncertain particularly with the possible confirmation of Barrett.

As a judge on the U.S. Court of Appeals for the 7th Circuit, Barrett has not heard any cases dealing with the ACA. But court watchers have been quick to bring up her 2017 paper in the Notre Dame Law School journal where she criticized Chief Justice John Roberts' majority opinion in the 2012 ruling, saying he "pushed the Affordable Care Act beyond its plausible meaning to save the statute."

Although the article has raised red flags for those concerned that Barrett could vote to dismantle the law — if she is confirmed to the court in time to hear the case — some legal scholars have said this doesn't necessarily reveal how she would vote since this case centers on a different legal question.

The Catholic Church has had a complicated relationship with the health care law. Catholic hospitals have long emphasized the poor and vulnerable must have access to health care, but church leaders have objected to the law's contraceptive mandate, requiring that employee health insurance plans provide contraceptive coverage.

Politics | Supreme Court's new term is busy on many levels