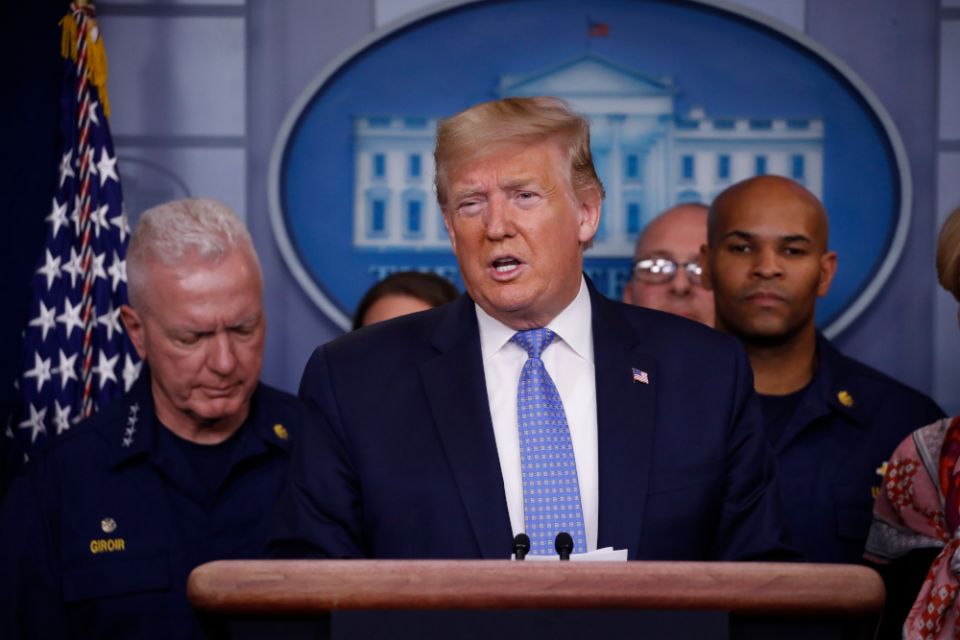 President Donald Trump speaks during a briefing about the coronavirus in the James Brady Press Briefing Room of the White House, Sunday, March 15, 2020, in Washington. (AP/Alex Brandon)

Washington — President Donald Trump on March 15 called on people to stop hoarding groceries and other supplies as one of the nation's most senior public health officials urged Americans to act with more urgency to protect themselves and others against the coronavirus. Dr. Anthony Fauci said he would like to see aggressive measures such as a 14-day national shutdown.

"You don't have to buy so much," Trump said at a news conference. "Take it easy. Just relax."

Trump assured Americans, after speaking with leading grocery chain executives, that grocers would remain open and that the supply chain remained healthy. Speaking at the same White House news conference, Vice President Mike Pence urged Americans to buy only the groceries they need for the week ahead.

The comments from the president came after the government's top infectious disease expert said he would like to see Americans to hunker down even more to help slow the spread of the coronavirus.

Still, Fauci said travel restrictions within the United States, such as to and from hard-hit Washington state and California, probably would not be needed anytime soon.

Officials in Washington were preparing for what was expected to be a long-haul effort to try to stem the virus that has upended life around the globe.

"The worst is yet ahead for us," Fauci said. "It is how we respond to that challenge that is going to determine what the ultimate endpoint is going to be."

Trump, on the other hand, offered an optimistic outlook even as officials said the infection rate in the U.S. was surging. The president acknowledged that the virus was "very contagious" but asserted that his administration had "tremendous control" over the spread of the disease.

Trump said expressed pleasure that the Federal Reserve announced March 15 it was taking emergency action to slash its benchmark interest rate to near zero. The move intended to help the economy withstand the coronavirus came a day after Trump once again threatened to fire or demote Fed Chairman Jerome Powell.

"It's really great for our country," Trump said of the central bank's actions.

Earlier March 15, Trump held a call with more than two dozen grocery store and supply chain executives to discuss their response to the coronavirus outbreak. Retailers have reported shoppers flocking to stores to stock up on food and other essentials. Consumers have expressed frustration that some items — such as hand sanitizer and toilet paper — are becoming more difficult to find.

It wasn't just supply shortages that had Americans frustrated — calls are mounting for better access to coronavirus tests.

The Trump administration said millions of new coronavirus tests would be made available in the coming weeks, including tests that speed processing of samples, but it was encouraging Americans to exercise restraint in seeking to get tested.

Dr. Deborah Birx, the White House coordinator for responding to the pandemic, said those most vulnerable to the respiratory disease and the healthcare providers treating them should go first.

Birx cautioned there will be a "spike" in positive results as more people gain access to tests.

Pence said that he and the president would brief the nation's governors on March 16 "specifically about our expanding testing to the American people." 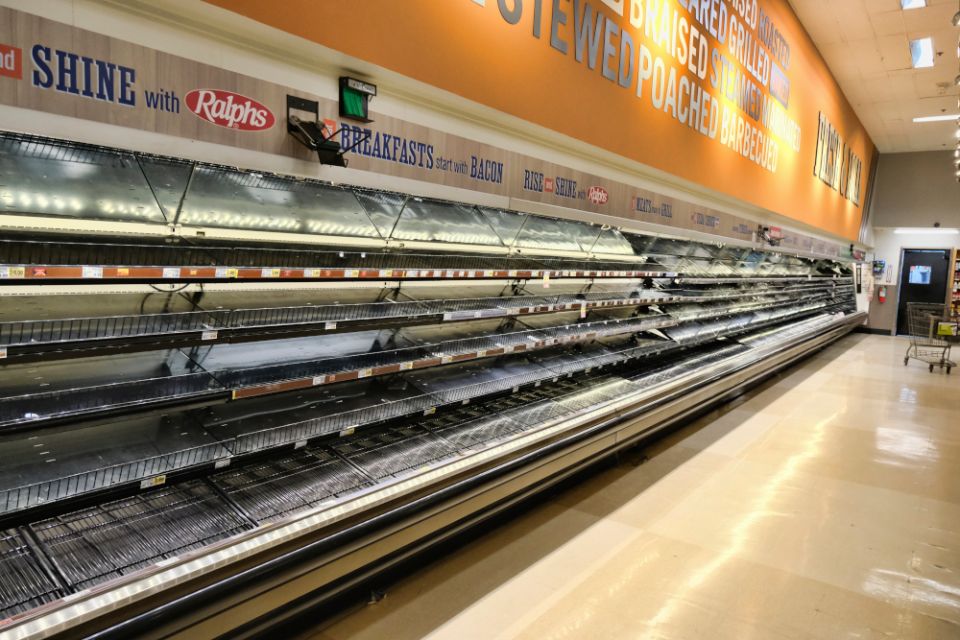 An entire section of meat and poultry is left empty after panicked shoppers swept through in fear of the coronavirus at a local grocery store in Burbank, Calif. on March 14, 2020. Californians wanting to escape the new reality of the coronavirus at the movies, casino or amusement park are running into the six foot rule. State health officials issued new guidance Saturday urging theaters to keep attendance under 250 people and ask strangers to sit six feet apart. (AP/Richard Vogel)

Chad Wolf, the acting secretary of Homeland Security, acknowledged that many travelers were facing "unacceptable" long lines as they waited to be screened at U.S. airports this weekend. He said average wait time for screening was down to 30 minutes at most airports, but the problem had not been fixed for those arriving at Chicago's O'Hare International Airport.

Pence said the federal government on March 16 will release updated guidance concerning restaurants, bars and other establishments. California and Illinois are among jurisdictions that have ordered restaurants and bars to close to help slow the spread of the virus.

Asked whether restaurants and bars around the nation should close for the time being, Fauci said he wanted to wait for the guidance to come but allowed, "That could be."

Expanded protocols were also on the way to protect the president and his staff. Starting March 16, those who enter the White House complex will have their temperatures taken.

House Speaker Nancy Pelosi, D-Calif., said Congress had started work on a new aid package after the one just approved by the House early March 14, which provided direct relief to Americans with sick pay and other resources and was pending in Senate.

"We have already begun work to develop a third emergency response package," Pelosi wrote in a letter to colleagues.

Senate Majority Leader Mitch McConnell said late March 15 the next package should have even more resources for Americans, the health care industry and "significant steps to secure our nation's economy."

With the U.S. Capitol among the many iconic landmarks closed to tours, Pelosi also urged lawmakers to have most of their Washington staff telework from home, as health officials urge social distancing. House lawmakers are away on weeklong recess and many have already curtailed office visits at their local offices, as well.

Fauci, the public face of the administration's messaging during a round of morning TV interviews, said the country should do as much as "we possibly could," even if officials were criticized for overreacting. He said he raised the issue of measures such as a shutdown with the Trump administration, and said officials were open to his ideas.

For most people, the new coronavirus causes only mild or moderate symptoms, such as fever and cough. For some, especially older adults and people with existing health problems, it can cause more severe illness, including pneumonia. The worldwide outbreak has sickened more than 156,000 people and left more than 5,800 dead. The death toll in the United States is more than 50, while infections neared 3,000 across 49 states and the District of Columbia.

The vast majority of people recover. According to the World Health Organization, people with mild illness recover in about two weeks, while those with more severe illness may take three weeks to six weeks to recover.

Trump in recent days has imposed sweeping travel restrictions for much of Europe. On March 14, he added the United Kingdom and Ireland to a list of countries that would face travel restrictions over the next 30 days. The State Department on March 15 said it would allow U.S. personnel to leave their diplomatic or consular posts worldwide if they or family members were medically determined to be at a higher risk of falling very ill if exposed to the virus.

Trump also has pledged broadened U.S. testing for the virus as major employers such as Apple Inc. have sent workers home to telework and several states and big cities, including Los Angeles and Boston, shuttered down schools for a week or more.

Trump has suggested that restrictions on travel within the U.S. to areas hit hard by the coronavirus pandemic could be next. But Fauci on March 15 played down that or having major national lockdowns on the level now seen in European countries such as Italy and Spain.