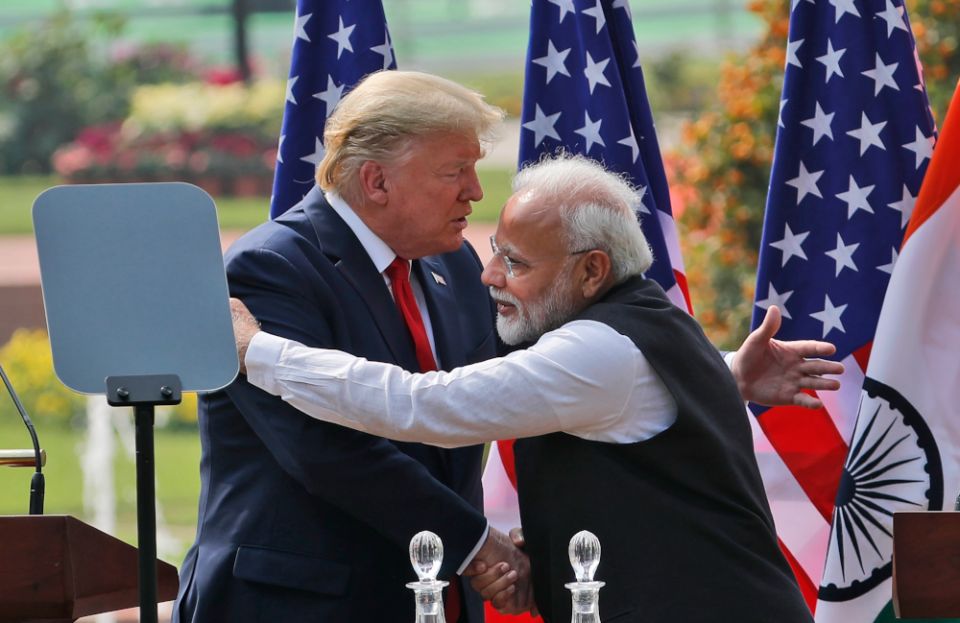 New Delhi, India — Defending the host who has showered him with pageantry, President Donald Trump refused Feb. 25 to speak out publicly against an Indian citizenship law pushed by Prime Minister Narendra Modi that has sparked deadly protests over discrimination against Muslims during the president's visit.

With at least 10 people killed in violent protests during his two-day visit, Trump told reporters that he didn't want to discuss the amendment that provides fast-track naturalization for some foreign-born religious minorities but not Muslims. The law is raising fears the country is inching nearer to a religious citizenship test.

"I want to leave that to India and hopefully they will make the right decision," Trump said. A senior administration official had told reporters before the trip that the U.S. was concerned about the developments.

The tip-toeing came as Trump was winding up a 36-hour visit to the subcontinent in which he was showered with praise at a mega rally in Ahmedabad, toured the majestic Taj Mahal, and held talks with Modi. Cities were plastered with billboards heralding Trump's arrival, his travel routes were lined with enthusiastic crowds, and colorfully costumed dancers and musicians entertained him at every turn.

As Trump as being feted, at least 10 people were killed and 150 injured in two days of clashes between supporters and opponents of the new citizenship amendment. On Feb. 25, an angry group of Hindus carrying pickaxes and iron rods hurled rocks at Muslims. Protesters in several areas of northeast Delhi threw stones and set shops and vehicles on fire.

And black smoke rose into the sky after Hindu protesters set fruit and vegetable shops and a Muslim shrine on fire in northeast New Delhi, witnesses said. Police fired tear gas to disperse the crowds.

Asked about the protests during a press conference before his departure, Trump said he had raised the issue of religious freedom with Modi and that the prime minister was "incredible" on the subject.

"He wants people to have religious freedom," said Trump, who shares much in common with Modi in both substance and style. The president himself proposed temporarily barring all Muslims from entering the U.S. during his 2016 campaign and successfully implemented a travel ban that targets travelers from certain majority-Muslim countries. Trump spoke at length during Feb. 24 rally about the threat posed by "radical Islamic terrorism" and his administration's efforts to defeat it.

While Feb. 24 events were mostly for show, Trump turned to substance Feb. 25, spending much of the day meeting with Modi in New Delhi. Trump emerged from the talks saying he was optimistic about prospects for ultimately completing a trade deal, though he offered no details about what — if anything — has been agreed to. 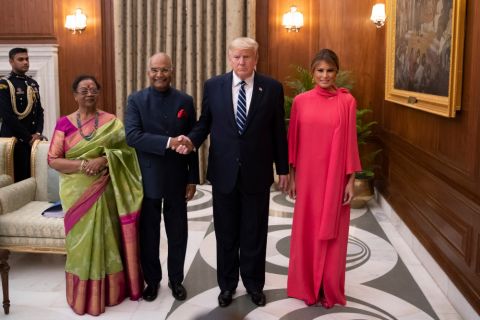 "Our teams have made tremendous progress on a comprehensive trade agreement and I'm optimistic we can reach a deal that will be of great importance to both countries," Trump told reporters. He said that if a deal happens, it will likely be "towards the end of the year."

The two countries have been engaged in a trade standoff since Trump imposed tariffs on Indian steel and aluminium exports. India responded with higher penalties on U.S. agricultural goods and restrictions on medical devices, prompting the U.S. to strip India of its decades-old trade preferences.

The day began with an elaborate welcome ceremony in front of the grand Rashtrapati Bhavan Presidential Palace in New Delhi. Cannons fired as the president's armored car rolled through the palace gates accompanied by red-uniformed guards on horseback. The ceremony included hundreds of military officials marching with instruments and swords.

Later, Trump and the first lady participated in a wreath-laying ceremony at Raj Ghat, a memorial to Mohandas Gandhi in New Delhi at the site where the famed Indian independence leader was cremated after his assassination in January 1948.

"The last two days were amazing in every sense of the word," Trump said, describing the trip as "unforgettable," "extraordinary" and an expression of "love."

Yet Trump's domestic squabbles were never far from mind, as he lashed out against his Democratic rivals, warning of economic calamity if he loses his reelection race in November, and slammed a pair of liberal-leaning Supreme Court justices, saying they should recuse themselves from cases involving him and his administration.

At a meeting with Indian business leaders, Trump abandoned the tradition of avoiding domestic politics while traveling abroad and claimed that, "if the wrong person gets elected, everything will come to a halt" and unemployment will soar.

Trump had joked as he took the stage for his press conference that he would be "very, very conservative" in his answers to avoid diverting attention from his "fantastic two days" in India.

Instead, he quickly criticized Justices Ruth Bader Ginsburg and Sonia Sotomayor, the latter for a blistering dissent that was critical of the Trump administration's rush to claim emergencies when asking the Supreme Court to review cases.

The Republican president also said he had not been briefed on intelligence suggesting Russia is meddling in the 2020 election, either to bolster himself or Democratic candidate Bernie Sanders.

Trump ended his visit with a state banquet at the opulent presidential palace in New Delhi that featured a menu with American-friendly twists on traditional Indian dishes before boarding his flight back to the U.S.

Associated Press writers Deb Riechmann and Darlene Superville in Washington and Sheikh Saaliq in New Delhi contributed to this report.

Your thoughts on Catholic Trump supporters