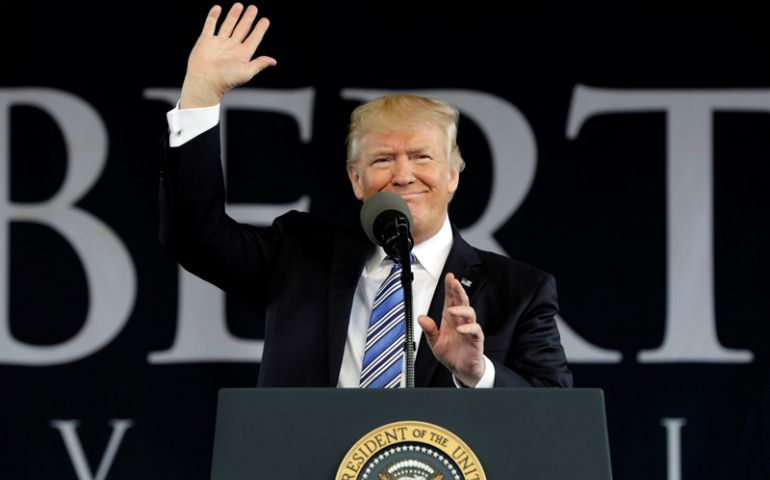 Lynchburg — Donald Trump thanked conservative Christians for their votes, and promised to protect their values in his first commencement address as president, at evangelical stronghold Liberty University.

“In America we don’t worship government, we worship God,” he said to raucous applause  at the graduation at the nation’s largest Christian university May 13, in Lynchburg, Virginia.

But 81 percent of white evangelical voters cast their ballots for Trump in November, buoyed by his campaign promises to safeguard their religious liberties in a country where they often feel that their rights to express their faith — at work in the public square — have come under attack.

Trump, who received an honorary law degree at Liberty’s commencement, said he was making good on his promises, pointing to the signing of an executive order earlier this month that directed the IRS to limit enforcement of the ban on pastors endorsing politicians from the pulpit.

“You are living witness of the gospel message of faith, hope and love,” Trump said. “I am so proud as your president to have helped you along over the past short period of time.  I said I was going to do it and Jerry, I did it,” Trump said referring to Falwell and the Johnson Amendment order.

“America is better when people put their faith into action,” Trump continued. “As long as I am your president no one is ever going to stop you from practicing your faith or from preaching what’s in your heart. We will always stand up for the right of all Americans to pray to God and to follow his teachings.”

Trump added that “America is beginning a new chapter,” an assertion endorsed by Falwell as he introduced Trump.

“Since his election I’ve noticed a new hope and a new optimism sweeping this country,” Falwell said. He said he appreciated Trump’s support for the state of Israel, appointment of  “a pro-life justice” to the Supreme Court, and bombing of militants in the Middle East.

“I do not believe that any president in our lifetimes has done so much that has benefitted the Christian community in such a short timespan than Donald Trump,” Falwell said.

Trump’s speech in friendly territory followed tumultuous days in which the Republican president came in for forceful criticism for his firing of former FBI Director James Comey, who was investigating charges of Russia’s meddling in the presidential campaign.

On May 21 Vice President Mike Pence will address the graduates of Notre Dame, the high-profile Catholic university which bucked its tradition this year by not inviting the recently-elected president to give its commencement speech.