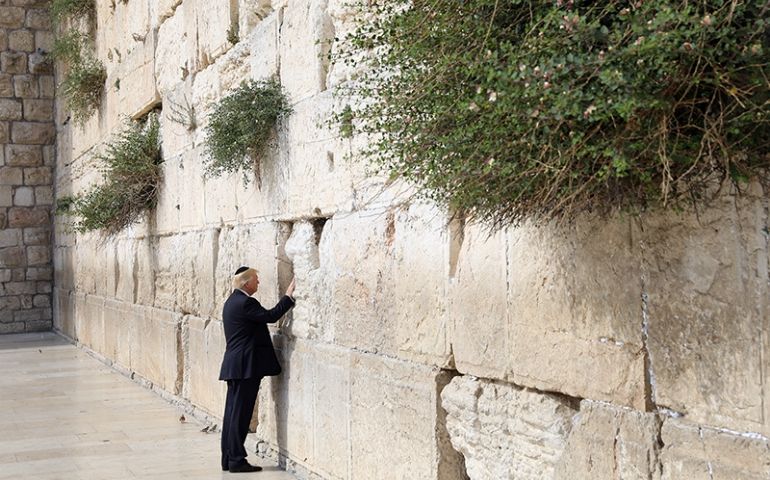 Washington — President Trump’s decision to maintain the U.S. Embassy in Tel Aviv has disappointed conservative Christians who were counting on him to make good on a key campaign promise.

But many expect that the long-awaited move will still occur and seem to give him the benefit of the doubt on the need to at least delay relocating the U.S. mission to Jerusalem given the realities of peacemaking in the Middle East.

“America’s recognition of the capital city of our foremost and only democratic ally in the Middle East should not be a bargaining chip,” said National Religious Broadcasters President Jerry Johnson, in a statement. “I am disappointed, but I take the President at his word that this is only a delay in delivering on his promise.”

The White House said the decision – which includes a six-month waiver on action related to the embassy — should not be considered “in any way a retreat from the President’s strong support for Israel” or his commitment to its alliance with the U.S.

“President Trump made this decision to maximize the chances of successfully negotiating a deal between Israel and the Palestinians, fulfilling his solemn obligation to defend America’s national security interests,” the White House stated. “But, as he has repeatedly stated his intention to move the embassy, the question is not if that move happens, but only when.”

Trump had said in a speech last year to the American Israel Public Affairs Committee he wanted to move the embassy to “the eternal capital of the Jewish people,” and added in a later interview that would happen “fairly quickly.”

But White House press secretary Sean Spicer had appeared to walk back that pledge at his very first press briefing, saying the administration was “at the early stages in this decision-making process.”

“If it was already a decision, we wouldn’t be going through a decision-making process,” he said.

Many Christian conservatives who have been strong proponents of relocating the embassy in Israel remain confident that Trump, who garnered 81 percent of the vote of white evangelicals, will keep his promise eventually.

“We are disappointed the President chose at this time to sign the Jerusalem Embassy Act waiver but remain hopeful that he will fulfill his campaign pledge and move the US Embassy in Israel to Jerusalem,” said Christians United for Israel in a statement. “The President knows that Jerusalem is the eternal and undivided capital of Israel and we strongly believe that the location of our embassy should reflect that reality.”

“History proves that Jerusalem has been the recognized capital of Israel for 3000 years,” Dallas pastor Robert Jeffress also said in a statement. “I trust the Trump Administration to eventually fulfill their commitment to move our embassy to Jerusalem at the most opportune time. ‘Not now’ does not mean ‘never.'”

In mid-May, before Trump visited Israel during his recent trip abroad, about 60 evangelical Christian leaders signed a letter urging the president to end the waivers that every president has granted since Congress called for the relocation of the mission in the Jerusalem Embassy Act of 1995.

“Such suspensions have been repeated semi-annually for two decades, and it is time to end America’s doublespeak,” they said in the letter organized by American Christian Leaders for Israel.

That letter mentioned language in the Republican Party’s 2016 platform that reads: “We recognize Jerusalem as the eternal and indivisible capital of the Jewish state and call for the American embassy to be moved there in fulfillment of U.S. law.”

And the letter writers noted that Trump had promised the ACLI that that policy would be kept if he made it to the White House: “Many of our constituents cast their vote for you due to this commitment.”

Johnnie Moore, a member of Trump’s evangelical advisory board, referenced the image of Trump praying at the Western Wall and said most evangelicals are convinced that the president remains supportive of Israel, while needing to juggle broader issues related to peace and security in the region.

“Most evangelicals will take this decision within its full context, not doubt the president’s support of Israel, and continue to believe that this is something that will happen at the right, appropriate time,” he said.