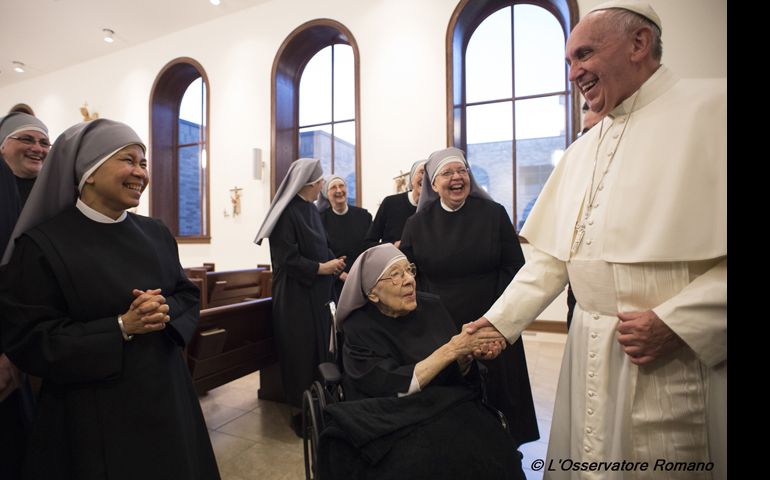 Pope Francis greets Sr. Marie Mathilde, 102, during his unannounced visit to the Little Sisters of the Poor residence in Washington Sept. 23. (CNS/L'Osservatore Romano)

Washington — The general counsel for the U.S. Conference of Catholic Bishops filed an amicus brief with the U.S. Supreme Court in support of the Little Sisters of the Poor, who have asked the court for relief from being forced to comply with the federal contraceptive mandate.

The brief was filed Jan. 8 in the Zubik v. Burwell case, which the court will hear this year. The case will determine whether the Little Sisters of the Poor and other ministries can be forced to comply with the contraceptive mandate of the U.S. Department of Health and Human Services.

Under the Affordable Care Act, all health insurance plans are required to provide coverage for birth control drugs and procedures. Churches themselves and other institutions that primarily employ and serve members of the churches are exempt.

Nonprofit religious entities such as church-run colleges and social service agencies are not exempt, but the federal Department of Health and Human Services created what it calls an "accommodation" under which such organizations morally opposed to the coverage may file a particular form or notify HHS that they will not provide it.

The contraceptive coverage is then provided to those organizations' employees, but through third parties, and with no cost or further involvement to the employer. Entities that refuse to comply with the mandate are subject to significant fines.

The Little Sisters of the Poor and other organizations that sued say that the acts of filling out the form or notifying HHS are a substantial burden on their religious rights because the steps implicate them in the ultimate provision of contraceptives. The 10th U.S. Circuit Court of Appeals disagreed in a July 14 ruling, saying the sisters were not substantially burdened by procedures set out by the federal government by which they could avoid the requirement to provide contraceptive coverage in employee health insurance.

Related: Little Sisters of the Poor to attend President Obama's final State of the Union address

The USCCB brief argues that the contraceptive mandate not only damages religious freedom, but society as a whole.

"If the petitioners abide by their religious beliefs, they face the loss of the ability to sponsor health coverage for their employees and millions of dollars in fines, threatening financial ruin. No one benefits from such an outcome -- not the organizations, their donors, their clients, or their employees," the brief said.

Other amicus briefs were filed by leaders from other faiths and members of Congress.

"We have great admiration for the Little Sisters who are standing up not just for themselves and the elderly poor they serve, but for the rights of all people of faith, including Jews," said Rabbi Mitchell Rocklin in a statement. "Their courage is an example to all of us," added the rabbi, a member of the executive committee of the Rabbinical Council of America.

Commenting on the Eternal Word Television Network's brief filed Jan. 11 on behalf of the Little Sisters, Michael P. Warsaw, chairman and CEO of the global Catholic network, said the filing "allows EWTN to have its voice heard as the court gives consideration to these important cases challenging the government's contraceptive mandate scheme."

"Our brief argues that the government's mandate and its subsequent 'accommodation' scheme seek to coerce EWTN and other religious organizations into violating our strongly held beliefs. The Supreme Court needs to find the mandate to be unconstitutional," Warsaw said in a statement.

Sr. Loraine Marie Maguire, mother provincial of the Little Sisters, based in Denver, said the sisters are "overjoyed and deeply grateful for the diverse outpouring of support we have received from such a variety of people and groups."

"We have been serving the elderly poor for over 175 years and are simply asking the government to allow us to continue our life's work without being forced to choose between our faith and millions in government fines," she said in a statement.

Sr. Loraine Marie and Sr. Constance Carolyn Veit, director of communications for the Little Sisters of the Poor, have been invited by House Speaker Paul D. Ryan, R-Wisconsin, to attend President Barack Obama's State of the Union address Jan. 12.