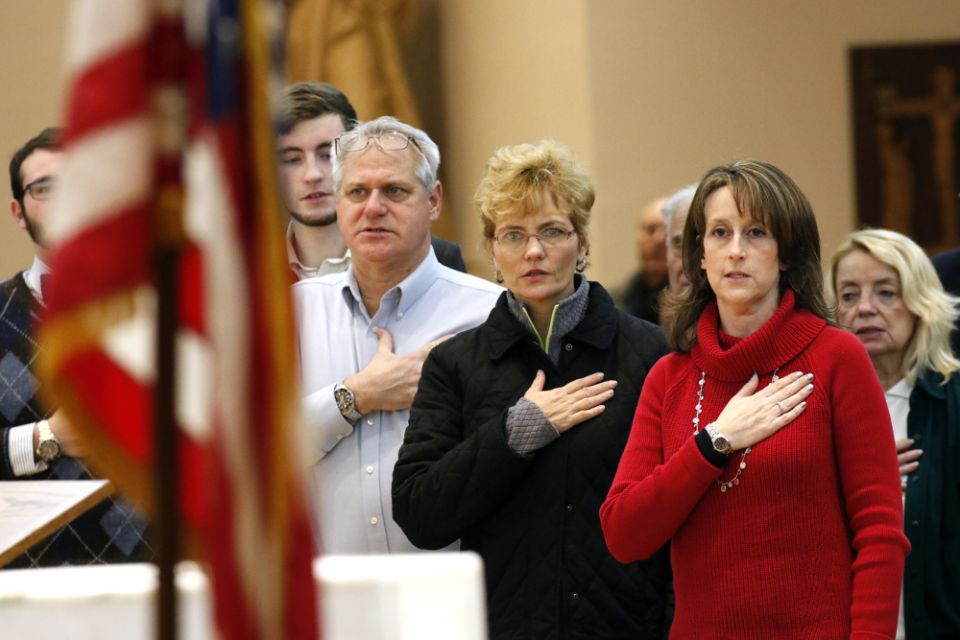 People recite the Pledge of Allegiance at the beginning of a presentation on religious freedom and conscience rights Jan. 3 at St. Patrick Church in Smithtown, N.Y. (CNS/Gregory A. Shemitz)

Washington — The Archdiocese of Washington filed suit in federal court Nov. 28 over the Washington Metropolitan Area Transit Authority's advertising guidelines after the transit system rejected an Advent and Christmas advertisement.

The archdiocese seeks injunctive relief after WMATA, as the agency is known, refused to allow an ad promoting the archdiocese's annual "Find the Perfect Gift" initiative for the Advent and Christmas seasons. The suit was filed in the U.S. District Court for the District of Columbia.

The archdiocese contends WMATA's policy that "prohibits all noncommercial advertising, including any speech that purportedly promotes a religion, religious practice or belief," is a violation of the free speech and free exercise of religion clauses of the First Amendment and a violation of the due process clause of the Fifth Amendment.

The WMATA's prohibition, the archdiocese contends, "violates the free speech rights of the Archdiocese because the prohibition creates an unreasonable and disproportionate burden on the exercise of the archdiocese's speech without any legitimate justification."

"We believe rejection of this ad to be a clear violation of fundamental free speech and a limitation on the exercise of our faith," said Kim Fiorentino, archdiocesan chancellor and general counsel. "We look forward to presenting our case to affirm the right of all to express such viewpoints in the public square."

The archdiocese has in previous years advertised on WMATA's public buses. Up until 2015, the archdiocese purchased WMATA space for ads that, according to the lawsuit, "were explicitly religious in character."

"These advertisements included a campaign highlighting the importance of the sacrament of reconciliation during the liturgical season of Lent. This campaign, 'The Light Is on for You,' was remarkably successful for the archdiocese — and lucrative for WMATA — with advertisements on the backs of 85 buses throughout the metropolitan area."

The advertisements rejected by WMATA highlight the archdiocese's annual "Find the Perfect Gift" campaign, which refers views to the FindThePerfectGift.org website that includes Mass schedules, reflections on the meaning of Advent and Christmas, religious holiday traditions and opportunities for charitable service. The image is a silhouette of shepherds and sheep standing on a hill.

"The rejected ad conveys a simple message of hope, and an invitation to participate in the Christmas season. Yet citing its guidelines, WMATA's legal counsel said the ad 'depicts a religious scene and thus seeks to promote religion,' " said Ed McFadden, secretary for communications for the Archdiocese of Washington.

"To borrow from a favorite Christmas story, under WMATA's guidelines, if the ads are about packages, boxes or bags … if Christmas comes from a store … then it seems WMATA approves. But if Christmas means a little bit more, WMATA plays Grinch."

Susan Timoney, secretary for pastoral ministry and social concerns for the archdiocese, noted that the rejected advertisement "was designed to be placed on Metro bus exteriors to reach the broadest audience and to invite everyone to experience the well-accepted joyful spirit of the season, or to share their many blessings with others less fortunate through service opportunities."

She said the ads were to convey the message that "the archdiocese wishes to encourage our society to help feed, clothe, and care for our most vulnerable neighbors, and to share our blessings, and welcome all who wish to hear the good news."

The lawsuit notes that because of WMATA's "discriminatory and arbitrary" enforcement of its policy, "the Archdiocese has suffered and will suffer irreparable harm, including the loss of its constitutional rights."

"WMATA's rejection of the archdiocese's speech amounts to a violation of the First Amendment, plain and simple," said Paul Clement of Kirkland & Ellis LLP, who is serving as counsel to the archdiocese in the case. "We are bringing this complaint to vindicate the basic principle that the government may not allow a wide variety of speech in a forum and then turn around and deny the archdiocese access because of the religious nature of its speech."

In a statement, Bishop Michael Burbidge of the neighboring Diocese of Arlington, Virginia, said WMATA's decision "to suppress free speech and ban the depiction of a religious scene is saddening and troubling."

"WMATA approves the commercialization of Christmas by showing ads depicting gifts and material goods, but unfortunately the portrayal of the reason we celebrate this time of year — the birth of Our Lord and Savior Jesus Christ — is a guideline violation," he added.

He called for the "egregious action" to "be reversed," and applauded Washington Cardinal Donald Wuerl and the archdiocese "for courageously addressing this issue."

"I pray that those with authority over WMATA guidelines will see reason and allow a simple, peaceful and joyful religious image to be displayed. Religious freedom must be upheld!" he said.

Szczepanowski is a staff writer at the Catholic Standard, newspaper of the Archdiocese of Washington. Contributing to this story was Zoey Marist at the Arlington Catholic Herald diocesan newspaper.

Washington Archdiocese considers next step in lawsuit over transit ad