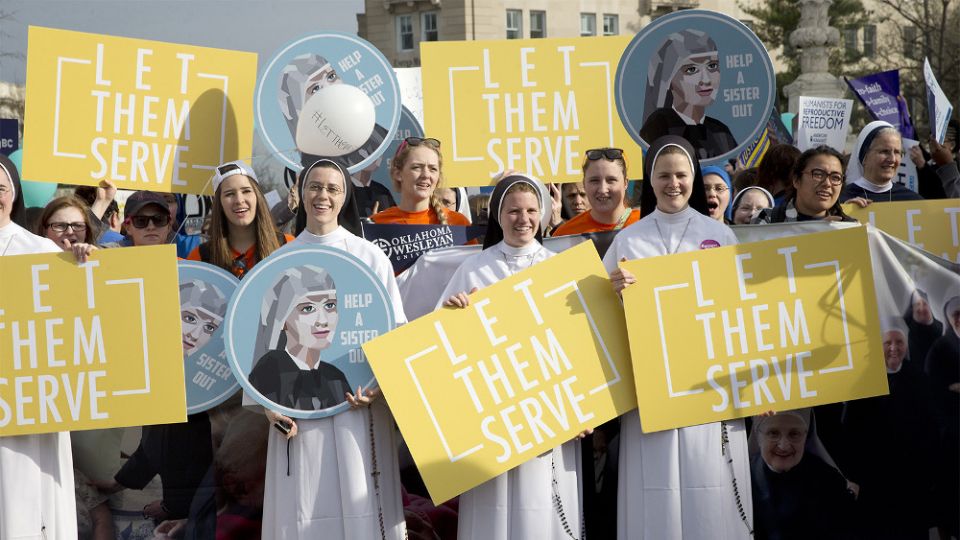 Nuns and their supporters rally outside the Supreme Court in Washington, D.C., on March 23, 2016, as the court hears arguments to allow birth control in health care plans in the Zubik vs. Burwell case. (AP/Jacquelyn Martin)

Washington — President Donald Trump's administration has issued new rules it says will "provide conscience protections for Americans who have a religious or moral objection to health insurance that covers contraception methods."

The final rules follow interim regulations issued a little more than a year ago by the Departments of Health and Human Services, Labor and Treasury that aimed to protect Americans with such objections from paying for health insurance that provided birth control. The departments claim a "small fraction" of the nation's 165 million women will be affected.

The rules counter the efforts by the Obama administration to provide access to free contraception through a provision of the Affordable Care Act. Those efforts were opposed by many critics of the previous administration who now provide a base of support for the current one.

"The first of today's final rules provides an exemption from the contraceptive coverage mandate to entities that object to services covered by the mandate on the basis of sincerely held religious beliefs," HHS said in a news release issued Wednesday (Nov. 7).

"The second final rule provides protections to nonprofit organizations and small businesses that have non-religious moral convictions opposing services covered by the mandate."

On the National Day of Prayer in May 2017, Trump signed an executive order that said the government would address "conscience-based objections" to the health care mandate. The order, which drew mixed reviews, called for the departments issuing the rules to consider taking the actions they took Wednesday.

The mother provincial of Little Sisters of the Poor, one of the religious groups that opposed the mandate, welcomed the administration's new regulations.

"Today, we are so grateful that the federal government has provided a way for us to continue to serve the elderly poor and stay true to our Catholic faith," Mother Loraine Marie Maguire said in a reaction tweeted by Becket, the law firm that has defended her order in court.

"We pray that lawsuits by the state governments that attempt to prevent this will soon be over and that we can finally serve the elderly poor in peace."

The administration noted that the new rules do not provide exemptions for governmental agencies or for publicly traded businesses.

The announcement, issued the day after the midterm elections, noted that government programs that provide subsidized or free contraceptive coverage to poor women, such as through community health centers, are not included in the exemptions.

But the exemptions do apply to several other groups that may object to the contraception mandate.

"The religious and moral exemptions provided by these rules also apply to institutions of education, issuers, and individuals," HHS said.

The new rules do not prohibit employers from covering contraceptives, HHS said.

The announcement said tens of millions of people are already exempted from the contraception mandate because it does not apply to plans insured through grandfathered coverage that existed prior to the law.

The rules will take effect 60 days after they are published in the Federal Register.

Americans United for Separation of Church and State said the administration's actions enable employers, including universities, to deny religious freedom as well as access to contraception coverage.

"This administration is weaponizing 'religious freedom' to justify hurting the millions of women who depend on contraception for their health and equality," said Americans United President and CEO Rachel Laser. "Bosses shouldn't get to impose their religious beliefs on their employees, nor should universities on their students."