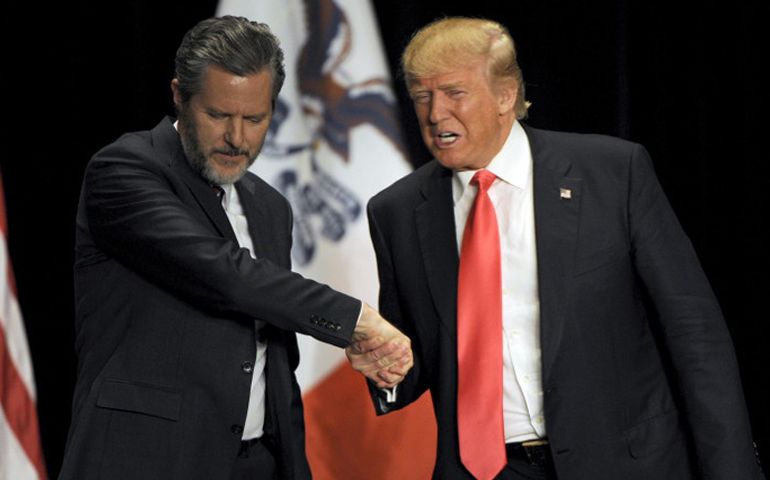 Donald Trump, right, shakes hands with Jerry Falwell Jr. during a campaign event at the Orpheum Theatre in Sioux City, Iowa, on Jan. 31, 2016. (Photo courtesy of Reuters/Dave Kaup)
This article appears in the Election 2016 feature series. View the full series.

The biggest religion news story of the 2016 election is erupting before our eyes. It is the continued vocal support of Donald Trump by public figures of the Christian right brand. Secondarily, it is the rupture between these men and other conservative Christians who almost always support the GOP but have abandoned or rejected Trump's candidacy.

This rupture pits mainly older conservative white male institutional leaders like Tony Perkins, Robert Jeffress, Ralph Reed, Pat Robertson, and most visibly Jerry Falwell Jr., against just about everyone else -- other institutional leaders, like Russell Moore, popular authors, like Max Lucado, and a host of significant evangelical women, like Beth Moore. And that is not to mention the progressive evangelicals, like myself, who have opposed Trump from the beginning on policy grounds.

It also sets the #StillTrump Christians against both leadership and rank-and-file Mormons, their erstwhile allies in conservative religious politics. This raises uncomfortable questions, at least for evangelicals, about which group has the more reliable moral compass. It's uncomfortable because many evangelicals are bewildered by Mormon theology and hardly count the group as fellow Christians.

Partisanship: There is no more reliable GOP voting bloc than white conservative Christians. This outcome is the product of 40 years of effort to fuse the two identities -- Christian, Republican -- on the part of both GOP operatives and Christian right leaders. But it also represents four decades of stated policy and values alignment between conservative white Christians and the GOP, at least on a selected range of issues.

Policy: The Christian right has for 40 years highlighted a "traditional values" policy agenda. Originally it was anti-feminist, anti-gay, and anti-abortion. The anti-feminism was the first to be (mainly) dropped, though just maybe it is surfacing again now; the anti-gay agenda is latent and would be much more visible with a different presidential candidate, and the anti-abortion agenda is going strong. Today the religious-liberty-for-conservative-Christians agenda has rocketed up alongside the others. As long as GOP presidential candidates promise to advance at least the anti-abortion and religious-liberty agendas by appointing conservative judges, they gain and keep Christian right support.

The fact that GOP presidents of much more serious conservative conviction than Trump routinely have failed to deliver on their promises to the Christian right seems to be forgotten rather conveniently every four years. At least they promise what the right wants, while Democrats promise the opposite.

Hillary: The Christian right disdains Hillary Clinton, not just for her policies but also for her (purported) character. The policy rejection would be true of pretty much any modern Democrat; the character rejection is unique to Clinton. And it is especially potent here -- if you are a Christian right activist, and your candidate's character is being questioned, and maybe you question it, you can comfort yourself with the idea that Hillary's character is bad too. (Whitewater, Travelgate, bimbo eruptions, emails, Benghazi, etc.)

So that's how you can be Jerry Falwell Jr., Ralph Reed, Tony Perkins, and now the ubiquitous Eric Metaxas, and continue to support Trump precisely from their kind of Christian perspective. Between the two candidates, character is viewed as a wash, policy strongly favors Trump, and partisanship automatically favors Trump.

But this then raises the obvious question: Is there anything that Donald Trump could do now, or could be shown to have done in the past, that might tip his perceived character challenges to a point where they might be seen as disqualifying?

For the Christian right folks I have mentioned, that point has apparently not been reached yet. Despite everything. And that is the religion news story of this election.

[David Gushee is distinguished university professor of Christian ethics and director of the Center for Theology and Public Life at Mercer University in Georgia. He writes the Christians, Conflict and Change column for RNS.]