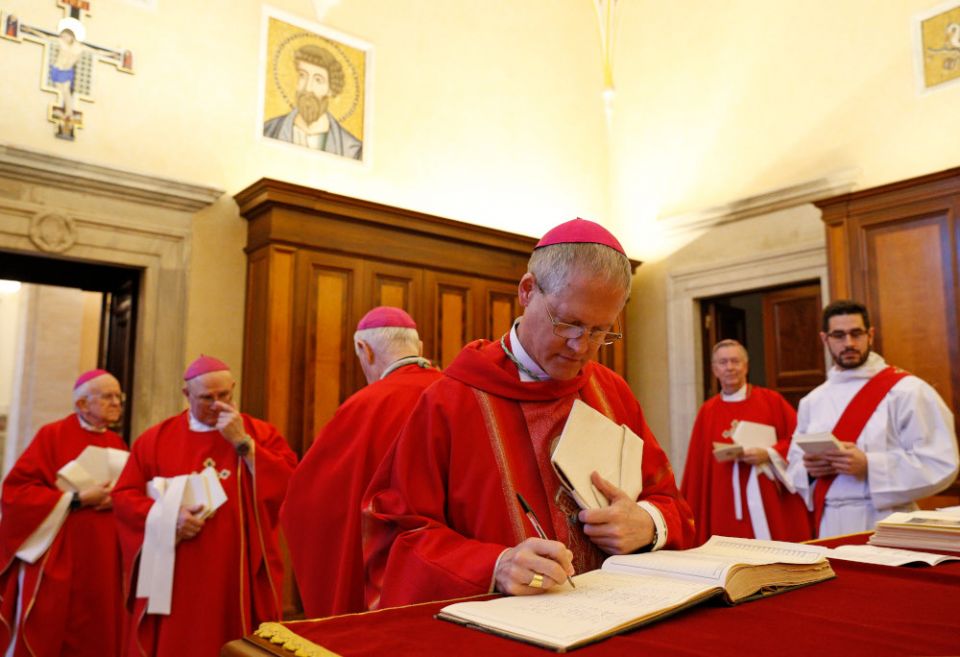 Archbishop Paul D. Etienne of the Archdiocese of Seattle, Wash., signs a guest book as bishops from Washington, Oregon, Idaho, Montana and Alaska prepare to concelebrate Mass at the Basilica of St. Paul Outside the Walls in Rome Feb. 7, 2020. The bishops were making their "ad limina" visits to report on the status of their dioceses to Pope Francis and Vatican officials. (CNS/Paul Haring)

Rome — Bishops from the northwestern United States ended their "ad limina" visit praying at the tomb of St. Paul after being reminded that a renewal of their ministry would come only with a renewal of their relationship with Jesus Christ.

Seattle Archbishop Paul D. Etienne led the prayers at the tomb after being the principal celebrant and homilist at Mass with the bishops of Washington, Oregon, Idaho, Montana and Alaska at Rome's Basilica of St. Paul Outside the Walls Feb. 7.

The bishops had begun their weeklong "ad limina" visit with an early morning Mass at the tomb of St. Peter Feb. 3, followed by a long meeting with Pope Francis. The rest of the week included Masses at the other major basilicas of Rome and meetings with top officials of the Roman Curia.

Most of the bishops were not heading home immediately, though. The Region XII bishops were scheduled to follow their "ad limina" visit with an eight-day retreat in Siena.

In his homily at the Mass at St. Paul's, \ Etienne said that "to be renewed in ministry as bishops, as successors to the apostles" involves more than meditating on the witness of Sts. Peter and Paul, who gave their lives for the Gospel; "it is to be renewed in our own relationship with Jesus Christ, because, ultimately, that is why they shed their blood, ultimately that is why they were apostles."

The aim, he said, "is to become, as Peter and Paul, so identified with Christ that we can say with Paul, 'I have been crucified with Christ; yet I live, no longer I, but Christ lives in me. ... I live by faith in the Son of God."

"And when we face the many trials that are ours — many of which we talked about this week — we recall other encouraging words of Paul, who says, 'I can do all things in Christ who is my strength,'" the archbishop said.

"And when we grow discouraged," he said, "we do well to recall what Paul well knew: that we are not lacking in any spiritual gift; Christ will keep us firm to the end, because our God is faithful."

The bishops, the successors of the apostles, are called by the risen Jesus, the Lord who defeated death and sin, Etienne said. The risen Lord "calls us, by name, to share his life with us, to share his ministry, his mission with us."