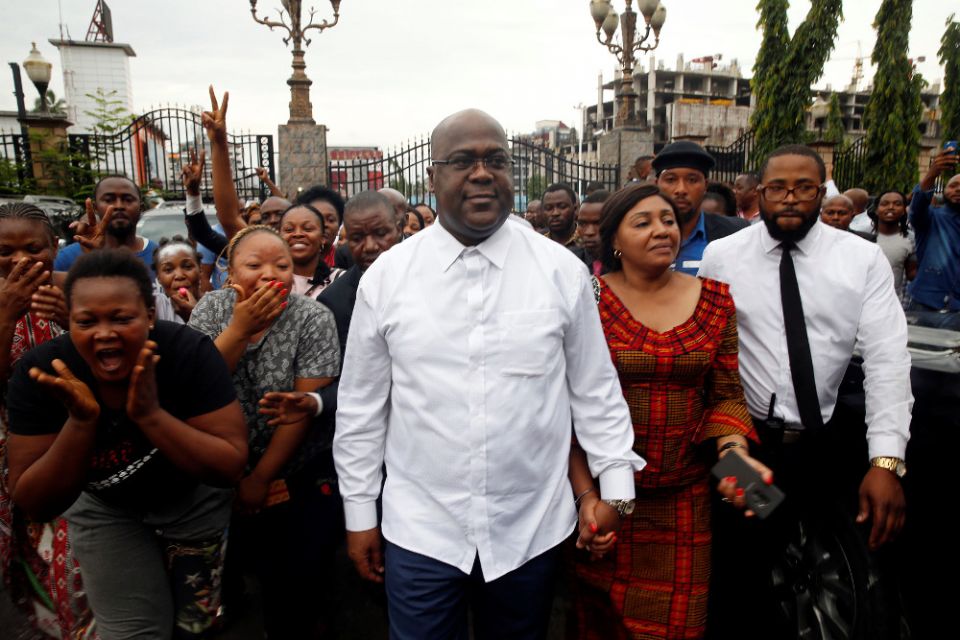 Felix Tshisekedi, leader of Congo's main opposition party, the Union for Democracy and Social Progress, who was announced as the winner of the presidential election, walks after a Jan. 10 meeting with his supporters in Kinshasa. (CNS/Reuters/Baz Ratner)

Kinshasa, Congo — Catholic church leaders in Congo have questioned the official outcome of the Dec. 30 elections, saying the officially published results "do not correspond with the data collected" by the church's 40,000 observers.

Congo's Electoral Commission declared Felix Tshisekedi the new president, with 38.5 percent of votes on a 48 percent turnout, making him the first opposition challenger to win power peacefully since Congo's 1960 independence. It made the announcement late Jan. 9.

Reuters news agency quoted unnamed diplomats Jan. 10 that data compiled by the Catholic Church, as well as by "all major observation missions, including from the African Union," suggested Martin Fayulu, a former oil tycoon who led in pre-election polling, had won an absolute majority in the Dec. 30 poll.

A Jan. 10 statement from the Congolese bishops' conference said it had observers in all voting centers.

"The collected results were analyzed and published by a team of multidisciplinary experts," the statement said. "From this mission's observations, we can state that the results published by the Electoral Commission do not correspond with the data collected by our observatory mission."

Besides polling station observers, the Catholic Church deployed over a thousand long-term monitors to cover the elections.

The vote, delayed multiple times, replaced President Joseph Kabila after 18 years in power. His second and final term expired in 2016.

Addressing supporters Jan. 10 in Kinshasa, Tshisekedi vowed to be "president of all Congolese," and praised the outgoing Kabila as "a partner in democratic change."

Government officials in France and Belgium, the former colonial powers, also questioned the declared results, while U.N. Secretary-General Antonio Guterres appealed for all parties to refrain from violence and channel disputes through "established institutional mechanisms."

In a separate Jan. 9 statement, the bishops' conference said the delay in announcing the election results had "incited suspicions," as well as "growing agitation among Congolese people," who hoped the naming of a new president would be a time of celebration, "not of desolation, still less of violence."

Catholics make up two-thirds of Congo's 67.5 million inhabitants, according to the Vatican yearbook. The church was involved in preparing for the elections, in line with a repeatedly delayed 2016 church-brokered accord between opposition politicians and the Kabila government.