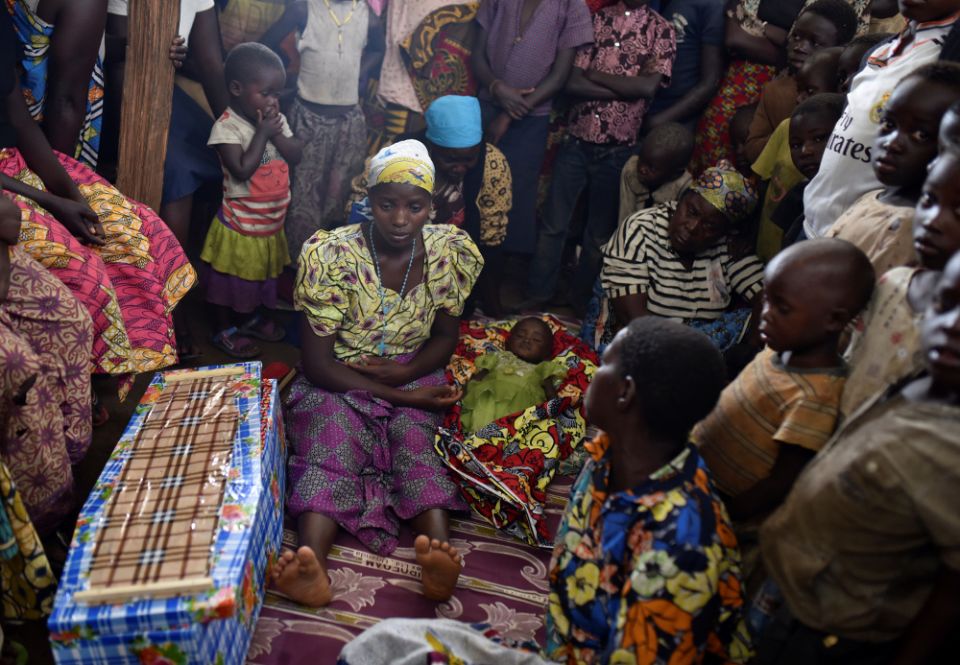 Congolese victims of ethnic violence prepare the burial of a child suspected to have died of measles at a camp in Ituri, Congo, June 25, 2019. Congo's bishops said territory in the east of the country is being ceded to violent extremists, who are using the lack of government control to massacre civilians and plunder resources. (CNS/Olivia Acland, Reuters)

Kinshasa, Congo — Congo's bishops said territory in the east of the country is being ceded to violent extremists, who are using the lack of government control to massacre civilians and plunder resources.

"We do not understand why the DRC's armed forces, backed by the United Nations Stabilization Mission, have not managed to neutralize these national and foreign armed groups," the bishops' conference said.

"We call on the president to assume fully a head of state's responsibilities, by installing a genuine state of law and establishing conditions for the army to respond effectively to its mission of defending and safeguarding national unity."

"Our populations feel abandoned, as plans to destabilize and Balkanize our country are orchestrated from abroad with the complicity of certain compatriots," they said in a June 24 message after their plenary in Kinshasa.

The bishops said hopes for "a true break from the previous system of governance" had been encouraged by President Felix Tshisekedi's release of political prisoners and "opening of political and media spaces."

However, they added that they were now concerned by long delays in the appointment of office-holders, as well as by rampant corruption and injustice, the restriction of civil rights, and a lack of preparation for local elections, scheduled for Sept. 22.

The bishops said armed gangs were "sowing death and desolation" in eastern provinces, as treatment centers for Ebola and measles also came under attack.

"We urge the Congolese people to unite, take up their destiny and realize that change means a struggle for us all, and not allow a minority to take our homeland and future hostage," the bishops said.

Media reported massacres in Beni and Butembo by Islamist fighters from Uganda and Nigeria.

In early June, the bishops of Bukavu said a "nebulous Islamic State" had boasted of mass killings; the bishops demanded firmer action from the government.

"We are alarmed by the proliferation of armed groups and thugs, who perpetrate attacks (and) kidnappings and pillage with the aim of massively displacing the population — these situations highlight the state's downfall," the Bukavu bishops said. "The wealth of our land cannot continue to enrich the pockets of criminals and foreign capital, while Congolese suffer in poverty."

The mineral-rich country has suffered persistent violence by armed groups, leaving 4.5 million people displaced and a fifth of the population needing basic assistance, according to the United Nations.

In a June 25 interview on the bishops' conference website, Bishop Placide Lubamba Ndjibu of Kasongo, whose diocese forms part of Bukavu province, said his region, with a large Muslim majority, formed "the spiritual fiefdom of moderate Islam in the DRC," but was also the entry point for Arab-speaking and foreign terrorists who "killed in the name of religion."

Bishop Gaston Ruvezi Kashala of Sakania-Kipushi, on the southeastern border with Zambia, said Congo's bishops had repeatedly denounced the "inhuman conditions" imposed by foreign mining companies, which were "destroying the family, youth, the environment and communications" in large parts of the country. However, he warned it was also dangerous to criticize mining operations, "since you don't know what will happen if you do."