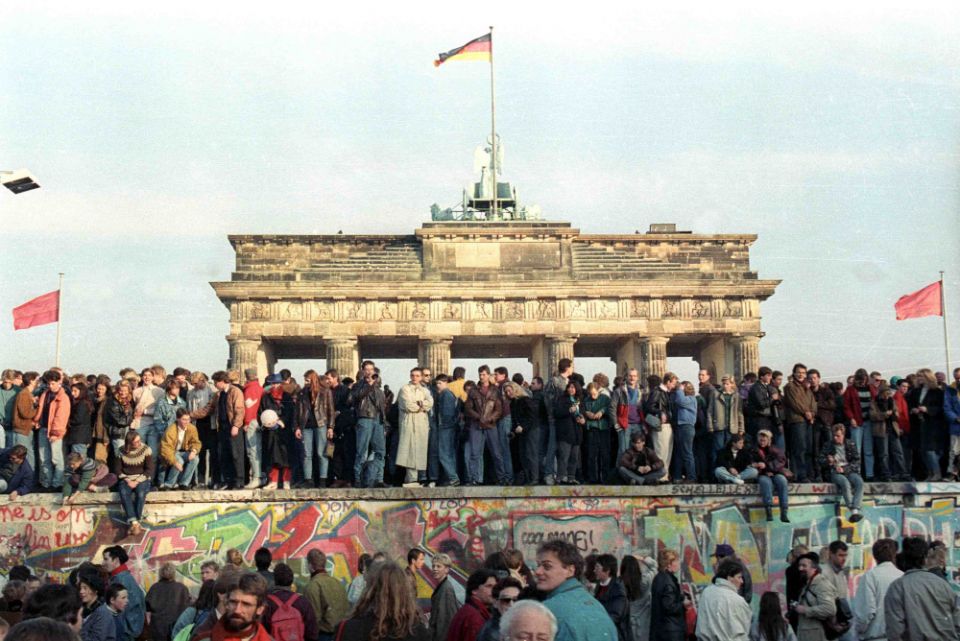 People stand atop the Berlin Wall in front of the Brandenburg Gate in this Nov. 10, 1989, file photo. Catholic bishops from the European Union marked 30 years since the breaching of the Berlin Wall with tributes to those who worked for peaceful change, as well as warnings against resurgent "ideologies behind the building of walls." (CNS/Reuters/David Brauchli)

Brussels — Catholic bishops from the European Union marked 30 years since the breaching of the Berlin Wall with tributes to those who worked for peaceful change, as well as warnings against resurgent "ideologies behind the building of walls."

"The fall of the Berlin Wall was one of the most important events in European history of the last decades, a moment full of emotion," the Commission of the Bishops' Conferences of the European Union, or COMECE, said in a Nov. 6 statement. "But not all the expectations that the fall of the wall brought forth have been fulfilled. It is also true that the ideologies behind building the wall have not fully disappeared in Europe and are still present today in different forms."

The statement said the Berlin Wall had symbolized "the ideological division of Europe and the whole world," adding that its breaching during mass protests Nov. 9, 1989, had "opened the way for regaining freedom" after communist rule in Central and Eastern Europe.

"Having been separated by a concrete wall for more than 28 years, people — relatives, friends and neighbors — living in the same city were able to meet each other, celebrate and express their joy and hopes. From this moment the world looked different," said the document, signed by representatives of 26 bishops' conferences.

"We acknowledge the process of healing and reconciliation is delicate and difficult. Even today, for some of the victims of the oppressive regimes of the past, this process is far from completed. ... Yet we want to revive and foster those signs of hope, those expectations for a better future that guided that historic moment."

The Berlin Wall, built in 1961 with watchtowers, anti-vehicle trenches and a mined "death strip," divided the communist-ruled East Germany from West Germany and symbolized the Iron Curtain during the Cold War.

In 1989, democratic changes in Poland and Hungary fueled civil unrest in East Germany, which culminated with a Nov. 9 government announcement that citizens could now travel west. Demolition of the already damaged wall began officially in June 1990 and was completed in November 1991.

COMECE urged Christians to devote themselves "to a Europe moved by the Holy Spirit" but cautioned that they needed a "genuine capacity to listen first."

"The fall of the Berlin Wall is not only a past event to be celebrated but also has a prophetic dimension — it has taught us constructing walls between people is never the solution," the bishops said.