People can call Jesus at any moment; he is always there, pope says 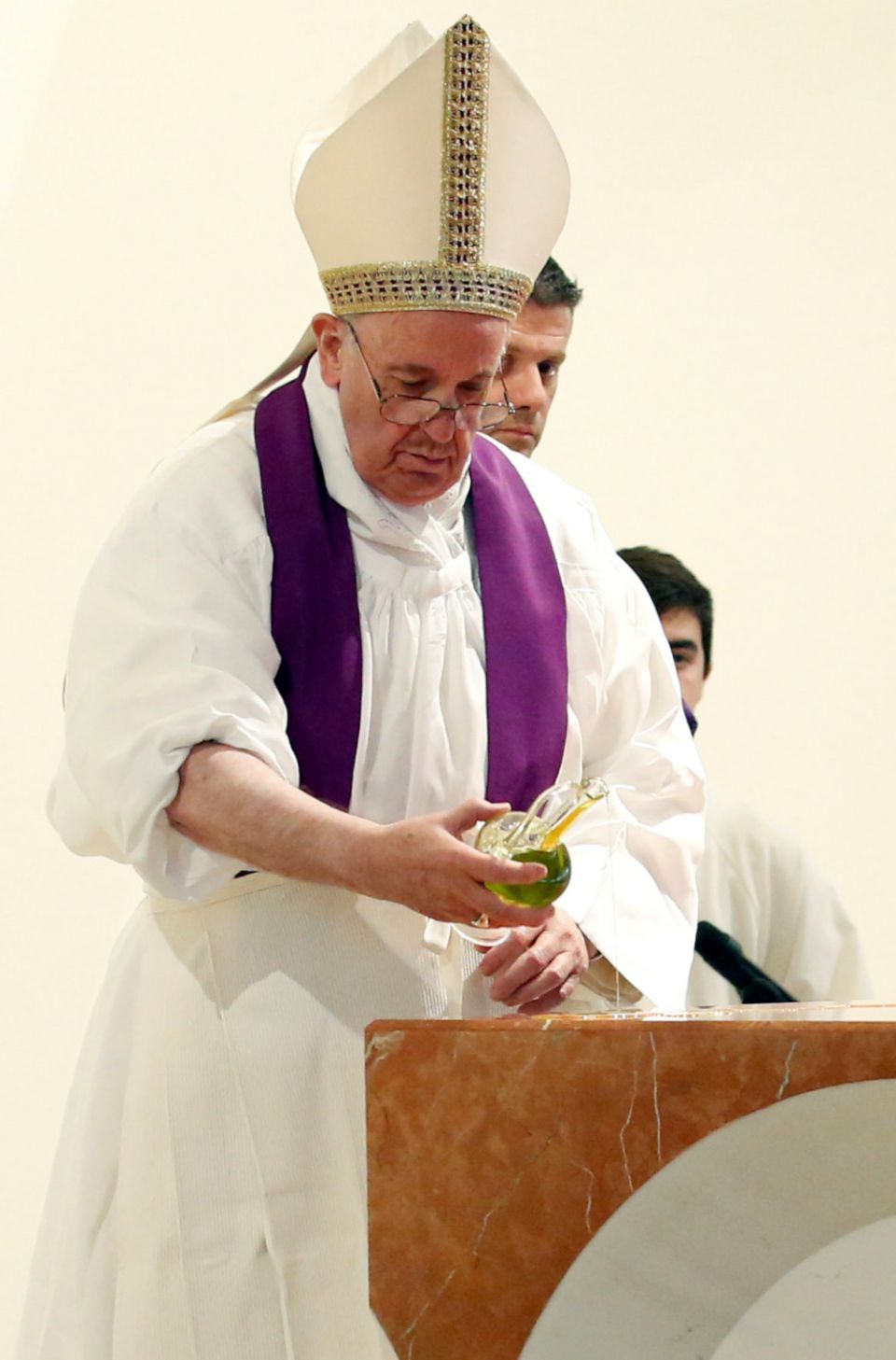 Pope Francis blesses a new altar with holy oil as he celebrates Mass at the Parish of St. Julius in Rome April 7, 2019. (CNS/Reuters/Remo Casilli)

Vatican City — Everyone has a direct line to Jesus, who is always nearby, ready to listen and help, Pope Francis said.

"Jesus likes to see the truth of our heart. Don't pretend in front of Jesus. With Jesus, always say what you are feeling," he said during a visit April 7 to a Rome parish.

Francis met with young people, newlyweds, volunteers, the sick, the elderly and other members of the parish of St. Julius in Rome before celebrating Mass in their newly restructured church, blessing and anointing the new altar.

Before Mass, he took time to listen to and answer parishioners' questions, receive drawings and gifts as well as celebrate the Sacrament of Reconciliation with three young people and a mother.

The pope said a young man had asked him if there was any truth to what his grandfather had told him, "that the pope, as successor of Peter, has Peter's phone number and calls him."

While the pope said he didn't have St. Peter's number, "We all have Jesus' 'mobile phone number' and all of us can connect with Jesus, who always has 'good reception,' always!"

"He always listens because he is so close to us," which means he is always easy to find, the pope said. "He sees us, he loves us" and understands everything, he added.

Never be afraid to tell Jesus the truth, to get mad at him, to express your doubts and fears, the pope told young people.

Answering a question about what to do when faced with a crisis of faith, the pope said people must always seek the help of others -- a parent, a friend, a catechist -- as well as speak to Jesus.

A person should never stop talking to Jesus, even when they are angry with him because even "getting angry with Jesus can be a kind of praying." He is always patient and will listen, he added.

The pope told a young catechist how important it was to help young people express and deal with doubt in a healthy and constructive way.

Otherwise, when young people receive their confirmation, the sacrament will become what some people in Rome call "the sacrament of farewell," marking the end of the person's active participation in church life.

"They leave because they do not know how to handle doubt. Instead if you, as a leader, teach them to doubt well and look for solid, true answers, you will prepare them so confirmation will not be the 'sacrament of farewell,'" he said.

When a young girl asked the pope if he ever personally helped feed the poor, the pope said, "Yes, I have, many times. It is something all Christians must do, to personally give the poor something to eat."

Everyone, starting as a newborn, has had to depend on someone else to be fed, he said.

However, some people lack food or proper nutrition because of poverty or a lack of employment, he added.

Everyone must always help others be fed just as "God gives us to eat" through the earth's abundance.

Quick Reads | People can call Jesus at any moment; he is always there, pope says