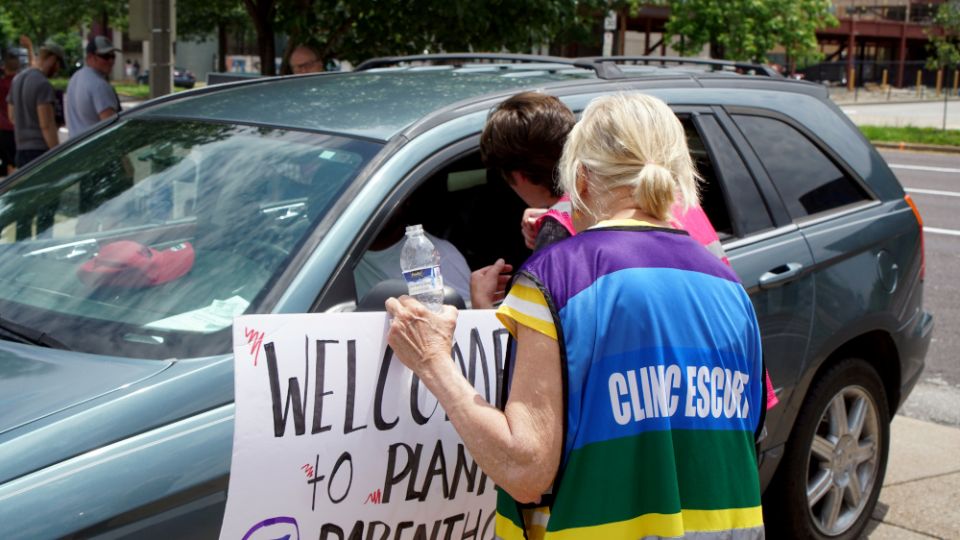 A Planned Parenthood's escort advises a pro-life advocate to not stop cars coming into the organization's facility during a rally in St. Louis June 4, 2019. A federal judge temporarily blocked Missouri's ban on abortion on or beyond the eighth week of pregnancy Aug. 27. (CNS/Reuters/Lawrence Bryant)

Kansas City, Mo. — A federal judge temporarily blocked Missouri's ban on abortion on or beyond the eighth week of pregnancy that was to take effect Aug. 28.

U.S. District Judge Howard Sachs delayed implementation of the law in a ruling Aug. 27 while a legal challenge to it continues.

The decision comes in a lawsuit filed by the American Civil Liberties Union of Missouri and Planned Parenthood. The organizations argued that the law is unconstitutional and violates the 1973 U.S. Supreme Court Roe v. Wade decision that legalized abortion nationwide.

Gov. Mike Parson's signing of the bill May 24 was welcomed by Catholic and pro-life leaders.

The law provides an exception in cases of medical emergencies, but there are not exceptions for rape or incest. Doctors performing abortions after eight weeks under the law would have faced five to 15 years in prison. There is no punishment for the mother.

The Missouri Catholic Conference, the public policy arm of the state's bishops, has noted the law also features other pro-life measures, including increased parental notification and informed consent provisions, a ban on abortions based on race, gender and Down syndrome diagnosis, and "an outright ban when Roe v. Wade is overturned."

Other provisions of the law include a ban on abortion at later gestations, between 14 and 20 weeks, if the eight-week ban is eventually struck down by the courts. Missouri law prohibits abortions after viability, which is determined by a physician.

Similar laws in North Dakota, Iowa, Kentucky and Mississippi have been blocked by judges.

States have been adopting such bans in an attempt to have the U.S. Supreme Court revisit the Roe v. Wade decision.

Attorneys for the state can appeal Sachs' ruling. They have argued that limits on abortion have been allowed by courts elsewhere based on the gestational age of the fetus.

Missouri Solicitor General John Sauer argued during a court hearing Aug. 26 that the American Civil Liberties Union and Planned Parenthood have no standing to challenge the law.