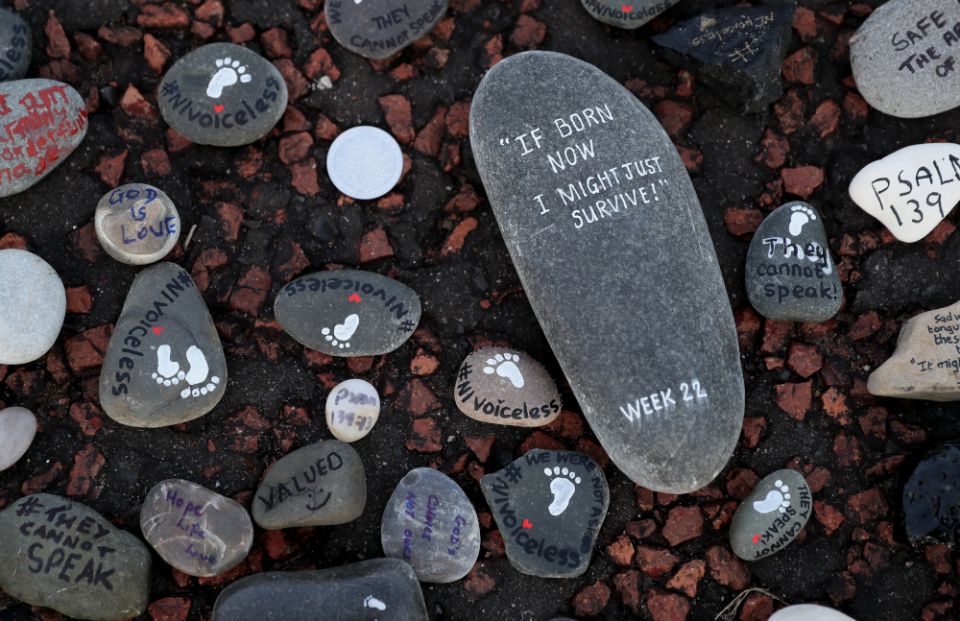 Stones placed by pro-life supporters are part of a silent demonstration Nov. 30, 2019, in Belfast, Northern Ireland. The Catholic bishops of Northern Ireland have asked the U.K. government to include a mandatory waiting period for women who request abortions under a new law. (CNS/Reuters/Brian Lawless)

Manchester, England — The Catholic bishops of Northern Ireland have asked the U.K. government to include a mandatory waiting period for women who request abortions under a new law.

They also demanded that abortion services, such as access to abortion-inducing pills, are kept out of Catholic schools, and that all medical personnel and pharmacists have the legal right of conscientious objection to involvement in abortion procedures.

They set out their case in a response to a government consultation on the legal framework for abortion ahead of the law coming into force in March.

The five bishops said the law was "unjust" because it "directly and intentionally leads to the killing of an unborn child."

They told Julian Smith, secretary of state for Northern Ireland, that many women who asked for abortions were often "distressed and in a state of panic" but would sometimes later regret their choice.

"It is our view that urgent consideration be given to the inclusion of appropriate counseling services and a significant time period be provided for careful reflection on the serious nature of a decision to abort the unborn child," they said in a Dec. 17 summary of the response, posted on the website of the Irish Catholic Bishops' Conference.

They told Smith that before abortions are performed, women should be given "accurate and appropriate information regarding the risks involved in abortion as well as the range of mental and physical conditions that can emerge as a result of having had an abortion."

Post-abortion counseling services also should be offered, the bishops said.

The proposals to permit unrestricted access to abortions within 14 weeks of pregnancy, they added, amounted to abortion on demand.

"We wish to make it clear that we are completely opposed to all attempts to include any school premises as an option for the provision of abortion pills or any other abortion service," they continued.

"Similarly, any inclusion within the school curriculum of information about how to access abortion services would fundamentally undermine the Catholic ethos of our schools."

None of the political parties in Northern Ireland support abortion, but it was legalized by the British Parliament in London by an amendment to the Northern Ireland (Executive Formation) Act 2019, which was passed in October.

The Presbyterian Church in Ireland also has restated its opposition to the law as part of its response to the government, saying that the majority of the people in Northern Ireland feel that the proposals "go too far."

Irish media reported Dec. 16 that more than 100 medical professionals have written to Smith to say that the proposed law does not sufficiently protect health care workers who do not wish to be involved in abortions on grounds of conscience.