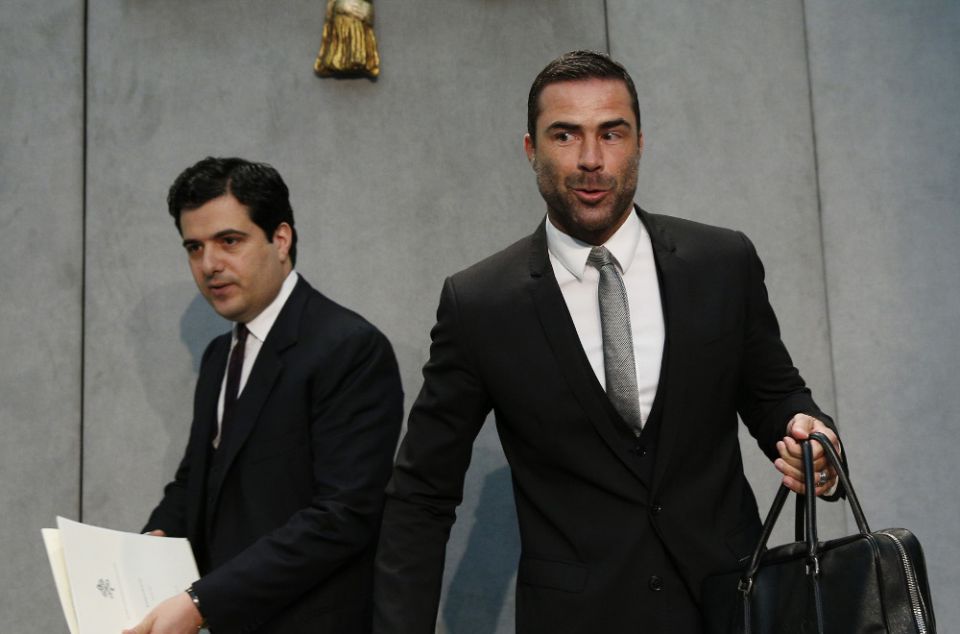 Tommaso Di Ruzza, director of the Financial Intelligence Authority, and Rene Brulhart, president of the same Vatican office, arrive for a news conference at the Vatican in this April 28, 2016, file photo. The leaders of the Financial Intelligence Authority said May 21 the Vatican has made great strides in reducing risks of financial impropriety. (CNS/Paul Haring)

Vatican City — Any time money changes hands, there is a potential for financial misconduct, but the leaders of the Vatican's Financial Information Authority said the Holy See has made enormous strides in reducing its risks.

Rene Brulhart and Tommaso Di Ruzza, respectively president and director of the office, released the FIA annual report May 21 at a Vatican news conference.

Vatican City State's unique status as an independent state and the headquarters of the Catholic Church — with missions and religious orders around the world — required the establishment of a "tailor-made system mainly to prevent illicit financial activities," Brulhart said.

The Holy See has "fewer worries" of financial misconduct than most nations, "but this doesn't mean we should not maintain preventive strategies, policies and measures," Di Ruzza said. "Given the peculiarity of the Holy See, there is a level of caution, especially on a moral scale, that must be maintained."

In 2018, the report said, the office received only 56 suspicious activity reports compared to 150 in 2017 and 207 in 2016. Eleven of the 56 reports were forwarded to the Vatican City court for further investigation and potential criminal charges.

The FIA now has a fully functioning "general risk assessment" tool for the prevention and countering of money laundering and financing terrorism. It deems the money-laundering risk as "low to medium," particularly because of the number of procurement and building contracts with entities outside the Vatican.

The financing of terrorism risk is defined as "low," and Brulhart and Di Ruzza said that in the eight years since FIA's establishment, no suspicious activity report and no inquiry from a foreign government's FIA office have involved suspected terrorism financing.

International agencies have complimented the Vatican for its new rules and structures to prevent money laundering and terrorism financing but have complained about the slow pace of follow up by the Vatican police and courts.

But in December 2018, for the first time, the Vatican court convicted someone of money laundering following an investigation based on an FIA report.

Angelo Proietti, an Italian contractor who is appealing his conviction, was sentenced to 2 1/2 years in jail for using a Vatican bank account for money laundering.

FIA also is increasingly cooperating with the similar agencies of dozens of countries in investigating financial impropriety, the report said.

Without mentioning specifics, the report spoke about a case in which the owners of an "alleged nonprofit organization" presented themselves as local affiliates of a Vatican-related institution and collected donations in its name. Thanks to information shared with the country, several people were arrested "on charges of criminal conspiracy and sums of money and valuables, including firearms, were seized."

The case mentioned in the report corresponds to the arrest in Spain in February 2018 of three Spaniards and a Colombian, who were allegedly operating a fake branch of the Vatican bank.