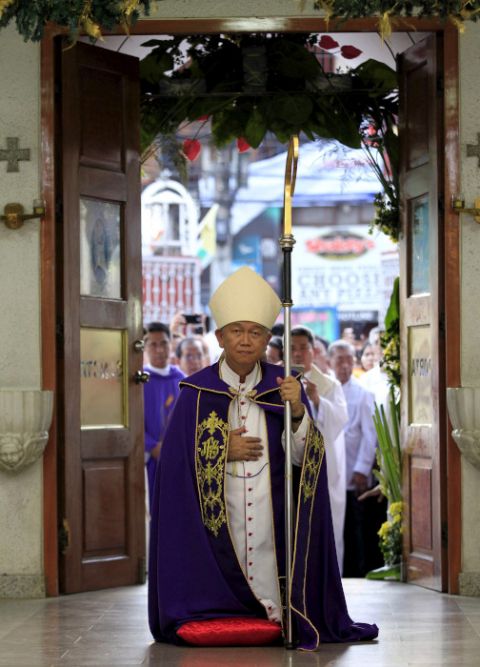 Auxiliary Bishop Broderick Pabillo of Manila, Philippines, is pictured in a Dec.13, 2015, photo. Pope Francis appointed Bishop Pabillo as the administrator of the Manila Archdiocese following the Feb. 9, 2020, departure of Cardinal Luis Antonio Tagle to assume a new post at the Vatican. (CNS photo/Reuters/Romeo Ranoco)

Manila, Philippines — Pope Francis has appointed a new administrator of the Manila Archdiocese following the Feb. 9 departure of Cardinal Luis Antonio Tagle to assume a new post at the Vatican.

Manila Auxiliary Bishop Broderick Pabillo, a vocal critic of the Philippines' "war on drugs," has been named apostolic administrator of the archdiocese, reported ucanews.com.

The Vatican usually appoints an apostolic administrator to temporarily head a diocese when it becomes vacant.

Pabillo, 64, was ordained a priest of the Salesian order in 1982 and has served as auxiliary bishop of Manila since May 2006.

Ucanews.com reported the bishop has criticized President Rodrigo Duterte on several occasions. In 2018, Pabillo called Duterte's remarks labeling God "stupid" as "blasphemous." He also accused the president of making "irresponsible statements" when Duterte said he was wishing death on bishops whom he called useless.

In 2017, Pabillo rejected an invitation from police for priests to observe anti-drug operations, saying it was "propaganda."

Tagle left for the Vatican Feb. 9 to assume the leadership of the Congregation for the Evangelization of Peoples.

In a farewell message, the cardinal called on Philippine Catholics to pray "for docility to the Holy Spirit as we continue our life as an archdiocese and await the next archbishop."

He assured Filipinos of his prayers as he asked Catholics to also pray for his new mission.

"I will always treasure my time with you. You can count on my prayers. Please pray for me and my mission as well," he said.