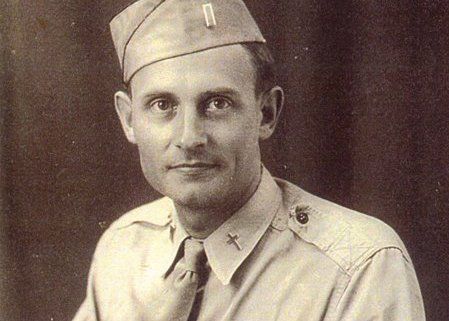 Fr. Emil Joseph Kapaun, a Kansas priest and a military chaplain, who died May 23, 1951, in a North Korean prisoner of war camp, is pictured circa 1943. A candidate for sainthood, he died ministering to prisoners of war during the Korean War. (CNS/U.S. Army courtesy The Catholic Advance)

Wichita, Kan. — A Kansas priest who is being considered for sainthood will be laid to rest in Wichita in September, his family and the Roman Catholic Diocese of Wichita announced May 11.

The remains of Fr. Emil Kapaun, who died in a prisoner of war camp during the Korean War, will be flown from Hawaii to Wichita on Sept. 25. The body will be taken to his hometown of Pilsen before being returned to the Cathedral of the Immaculate Conception in Wichita on Sept. 27, the diocese said.

A vigil will be held Sept. 28 and the funeral Mass is scheduled for Sept 29. Both services will be at Hartman Arena. The remains will be interred in a crypt inside the Cathedral of the Immaculate Conception.

He was was captured on Nov. 2, 1950, near Unsan, North Korea, while tending to soldiers. He continued to minister to fellow prisoners until he died of pneumonia, the U.S. Defense Department has said.

In 1993, Kapaun was named a "Servant of God," which is a preliminary step in the Catholic church's lengthy process of canonization.