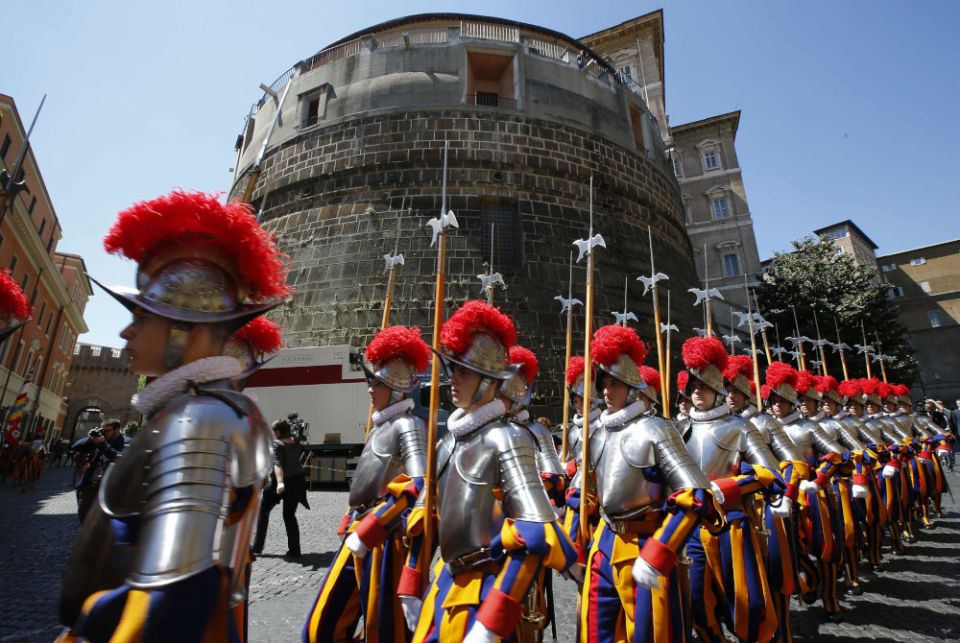 In this 2014 file photo, recruits of the Vatican's Swiss Guard march in front of the tower of the Institute for Works of Religion. The institute, often referred to as the Vatican bank, made a profit of 17.5 million euros (about US$19.8 million) in 2018, just over half the profit reported in the previous year, according to its annual report. (CNS/Reuters/Tony Gentile)

Vatican City — The Institute for the Works of Religion, often referred to as the Vatican bank, made a profit of 17.5 million euros (about US$19.8 million) in 2018, just over half the profit reported in the previous year, according to its annual report.

The bank, which had made a profit of 31.9 million euros in 2017, said the decrease was due "to the strong turbulence of the markets throughout the year and the persistence of interest rates which are still very low."

The institute held assets worth 5 billion euros (US$5.6 billion) at year's end, which included deposits and investments from close to 15,000 clients – mostly Catholic religious orders around the world, Vatican offices and employees, and Catholic clergy.

In a statement released by the Vatican June 11, the institute said it continued to provide financial services to the Catholic Church present in the whole world and Vatican City State.

According to the report, the bank's assets are worth 637 million euros (US$721 million), placing its tier 1 capital ratio – which measures the bank's financial strength – at 86.4 percent compared to 68.3 percent in 2017. The increased ratio, the bank said, "is a testament of its elevated solvency and its low-risk profile."

Additionally, the bank refined its screening process for financial investments to ensure that it is "consistent with Catholic ethics by selecting only companies that carry out activities that are in accordance with the social doctrine of the church."

The Vatican bank, the statement said, continues "to make investments aimed at fostering development in poorer countries while respecting choices that are consistent with establishing a sustainable future for future generations."

The Institute for the Works of Religion said that it also "contributed to the implementation of numerous charitable and social activities, both through donations of a financial nature and through reduced-rate or gratuitous leases for the use of its own real estate to entities for social purposes."

Before the report's release, the 2018 financial statements were audited by the firm Deloitte & Touche and were reviewed by the Commission of Cardinals overseeing the institute's work, the press release said.