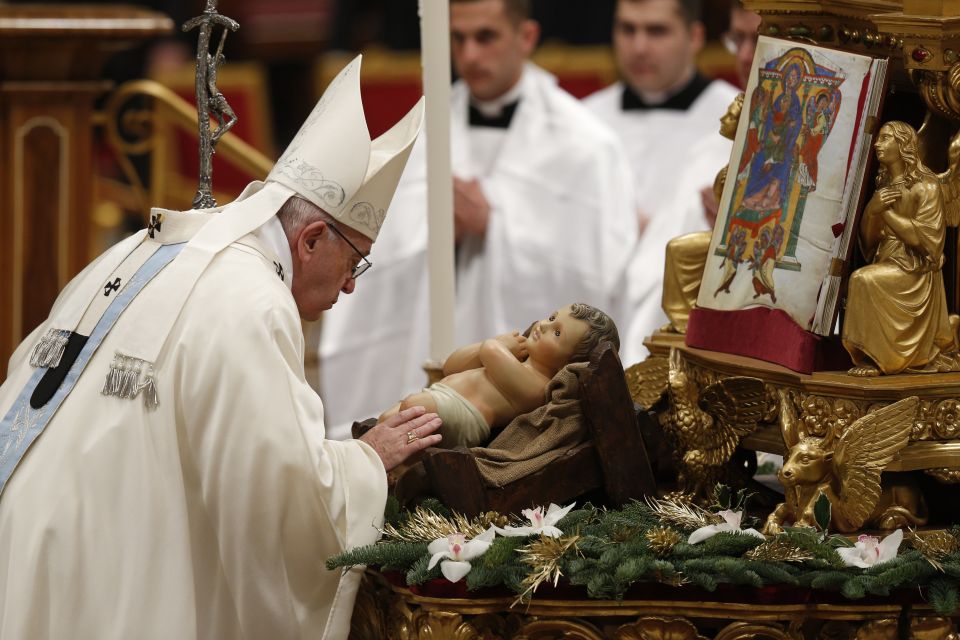 Pope Francis venerates a figurine of the baby Jesus at the start of Christmas Eve Mass in St. Peter's Basilica at the Vatican Dec. 24, 2017. As usual, the pope has a full schedule of Christmastime liturgies planned for December and January. (CNS/Paul Haring)

Vatican City — Pope Francis has a full schedule of Christmastime liturgies planned for December and January, including the customary baptism of newborn babies Jan. 13, the feast of the Baptism of the Lord.

The Masses and special celebrations include:

-- Dec. 25 at noon, Christmas message and blessing "urbi et orbi" ("to the city and the world") from the central balcony of St. Peter's Basilica.

-- Dec. 31 at 5 p.m., first vespers for the feast of Mary, Mother of God, followed by eucharistic exposition, the singing of the "Te Deum" hymn of praise in thanksgiving for the year that is ending and benediction.

Earlier, the Vatican had announced that on the feast of the Baptism of the Lord, Jan. 13, the pope would celebrate a morning Mass in the Sistine Chapel and baptize infants.

He is scheduled to travel to Panama Jan. 23-28 for World Youth Day.