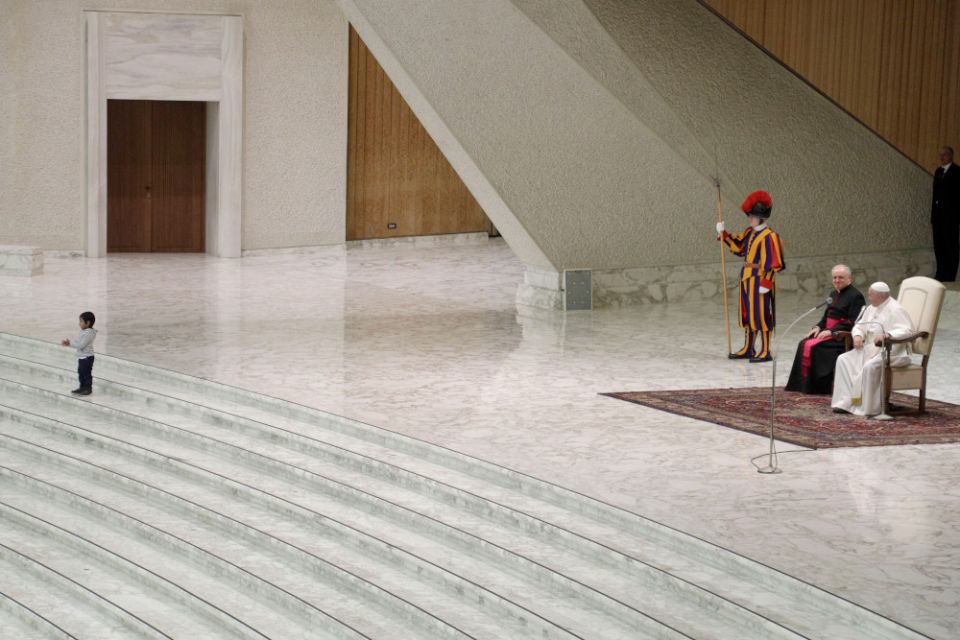 A child walks in front of Pope Francis during the weekly general audience in the Paul VI Hall at the Vatican, Wednesday, Jan. 22, 2020. (AP/Gregorio Borgia)

Vatican City — A global network of financial intelligence units has readmitted the Holy See after a two-month suspension sparked by a Vatican police raid on the Vatican's financial watchdog agency.

The Holy See said Jan. 23 that the Egmont Group had revoked its suspension after Vatican prosecutors signed a memorandum of understanding about the treatment of confidential documents that were seized in the raid.

Vatican police on Oct. 1 took computers, documents, cell phones and other materials from the Vatican's Financial Information Authority and from its secretariat of state for an investigation into an investment in a London real estate venture.

To date, Vatican prosecutors haven't charged anyone or interviewed all five Vatican officials who were suspended as part of the probe.

The delay and other gaps in the case suggest the investigation partly involved a turf war in the Vatican. The Financial Information Authority, known by its Italian acronym AIF, had aggressively launched investigations of its own that could have implicated high-ranking churchmen.

Its director, Tommaso di Ruzza, was suspended after the raid, and the mandate of AIF's president, Rene Bruelhart, was not renewed. Two board members resigned to protest the raid after the whole board issued a statement backing the integrity of the AIF leadership and their investigations.

The raid raised alarm at Egmont given that AIF is required to keep other countries' documentation and data confidential and secure. Egmont is a global consortium of national financial intelligence units, which share information via a secure communications network to cooperate in the global fight against financial crimes.

Because Vatican prosecutors refused initially to explain themselves or return the seized documentation, Egmont on Nov. 13 kicked the Vatican off its secure network.

In a statement Thursday, the authority's new president, Carmelo Barbagallo, said the Vatican's readmission "makes it possible for AIF to resume its collaboration with foreign financial intelligence units in full transparency and in the spirit of active cooperation."