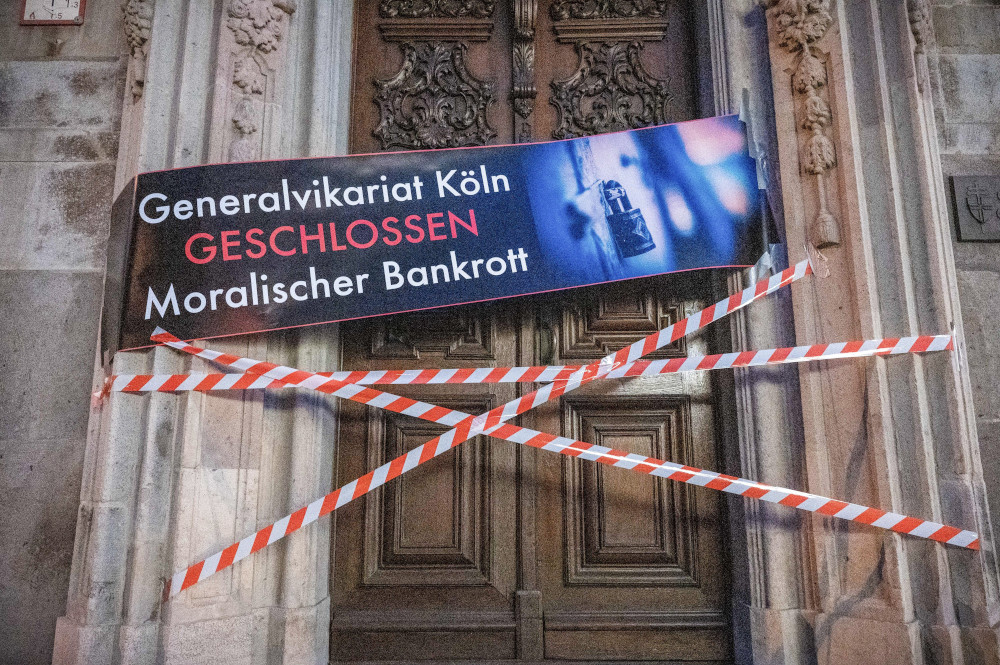 A recent report on the public relations strategy used by Cologne Cardinal Rainer Maria Woelki during a clerical sex abuse scandal has provoked renewed controversy, even after the cardinal's March return from his six-month sabbatical initiated by Pope Francis, reported the German Catholic news agency KNA.

Tim Kurzbach, president of the Diocesan Council of Catholics in the Archdiocese of Cologne, told the Frankfurter Allgemeine Zeitung newspaper Aug. 15 the cardinal should take another, longer sabbatical.

"I hope that someone will now soon take responsibility in the interests of the people in the Archdiocese of Cologne," Kurzbach said.

Early the same day, the Catholic reform group Maria 2.0 symbolically blocked access to the administrative headquarters of the archdiocese by stretching red and white barrier tape across the entrance and attaching a photo of a padlock with the message: "Vicar General's office Cologne CLOSED. Moral bankruptcy."

In addition, 21 diocesan employees demanded a new beginning with "personnel and systemic changes" and called on people to join the campaign.

Several prominent archdiocesan leaders have called for explanations, KNA reported. In Remscheid, less than 30 miles northeast of Cologne, Msgr. Thomas Kaster — who as city dean is the highest representative of the Catholic Church in the city — called on Francis to issue a clear statement on Woelki.

After allegations and accusations of mishandling reports on how the archdiocese dealt with clerical sex abuse, the cardinal has submitted a letter of resignation to the pope, who has not yet made a decision.

The renewed criticism was mainly triggered by a report in the Kölner Stadt-Anzeiger newspaper about the public relations strategy of the diocesan leadership.

On Aug. 5, the Cologne newspaper reported that Woelki's consultants had advised him and other leaders to persuade the victims' advisory board to back his decision to commission a new legal firm in October 2020 to conduct an investigative report into the archdiocese's handling of abuse. The newspaper cited an internal paper headlined "How the cardinal 'survives' until March 2021."

At the time, Woelki had been criticized for refusing to publish a previous legal report on the grounds that it contained methodological flaws.

The report said communications consultants had advised Woelki and other representatives of the archdiocese to show "emotions" in a meeting with the victims' advisory board and to have "jokers" up their sleeves, KNA reported.

Later, several members of the advisory board resigned from it, saying they had been taken by surprise when the change of law firm was approved and felt abused a second time. Many criticized this as an instrumentalization of abuse victims.

However, Msgr. Guido Assmann, vicar general, rejected the accusation. He said the actions of the archdiocese had "always and exclusively" been guided by the victims' point of view, KNA reported.