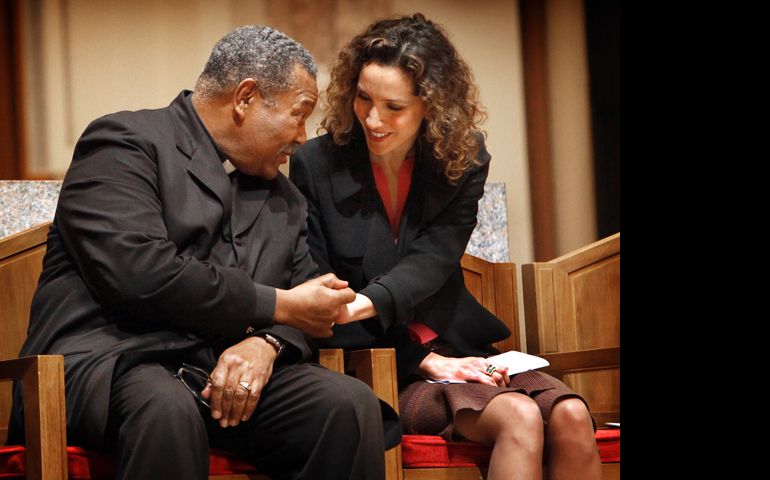 Chicago — The Rev. B. Herbert Martin told interfaith leaders gathered at Holy Name Cathedral Dec. 8, "I believe we can heal the heart of the city of Chicago."

He made the remarks at an interfaith prayer service planned after a year of increased murders in the city of Chicago and held in the wake of the U.S. Department of Justice announcing a probe into the use of force and accountability in the Chicago Police Department.

Referencing the spiritual "This Little Light of Mine" and waving a flashlight, Martin called on the "people of the light" to "shine this little light of mine" on the West Side, the South Side, in the Loop, the Gold Coast and all Chicago neighborhoods.

"Let it shine," he exclaimed, to a round of applause and a standing ovation.

Martin, who is pastor of Progressive Community Church, preached the sermon at the prayer service organized by the Council of Religious Leaders of Metropolitan Chicago in a show of solidarity against violence in the city and to pray for peace.

Martin used a Scripture passage for the basis of his sermon, quoting Chapter 29, Verse 7, of the Book of Jeremiah: "Work for the peace and prosperity of the city for its welfare will determine your welfare."

"I have good news to the bad news of this world," he said. "The earth is the Lord's and the fullness thereof."

The people of Chicago have become "disconnected," which has led to the violence and oppression. It's time for faith communities to reconnect and act, Rev. Martin said.

"After we pray, it is time for action," he said. "We must emerge from prayer with a holy dissatisfaction with this system as it is."

Martin called for more reforms in the police department and more resources from federal, state and local governments for poor communities.

"We are the moral force to seek mercy and justice for such a time as this. We are a force for the good of our city," he told the faith leaders.

In his closing remarks, Chicago Archbishop Blase J. Cupich spoke of Pope Francis crossing the threshold of the Holy Door in Rome earlier that day to open the Jubilee Year of Mercy.

"All of us who call Chicago home want to pass over this present threshold and step into a new space together," the archbishop said.

"We long to dwell together in a space where God's justice reigns and we are just when dealing with each other."